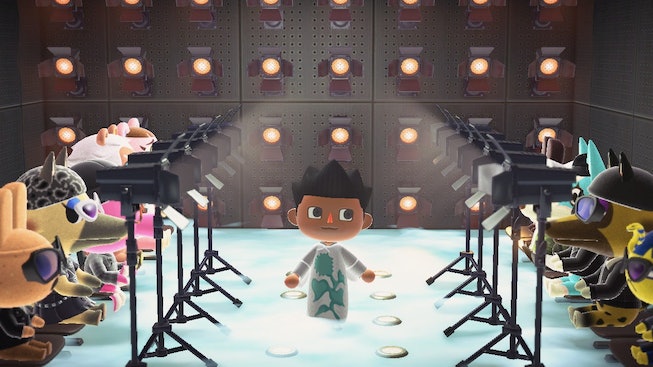 We have reached the next stage in Animal Crossing fashion: runway shows. During quarantine, many have found solace through the Nintendo game, particularly being able to dress up their avatars in designer pieces from Marc Jacobs, Valentino, Anna Sui, and more, courtesy of the designers themselves.

Kara Chung of the Instagram account Animal Crossing Fashion Archive thought up the idea of a virtual fashion show on the game and has teamed up with stylist Marc Goehring from Berlin-based fashion brand 032c. The three-minute video, which you can view below, was even soundtracked by Michel Gaubert, who's worked on music for IRL runway shows for Chanel, Louis Vuitton, Loewe, and Raf Simon.

“To be honest, [we prepared] very much like a normal pull in the first stage when working on a shoot: I went through my favorite collections of the season and picked the looks," Goehring told Vogue. "You have to really think about which specifics you can delete from a look and what you pixelate, so that in the end it remains this one specific look which everybody knows—and it’s recognizable!"

Hypebae is also planning its own Animal Crossing fashion show, which will be streamed live on its YouTube channel on May 27. Back in April, designer Sandy Liang showcased her collections on the game, too, when she hosted her own virtual pop-up for visitors to her island.

Who needs fashion week when you have a Nintendo Switch?