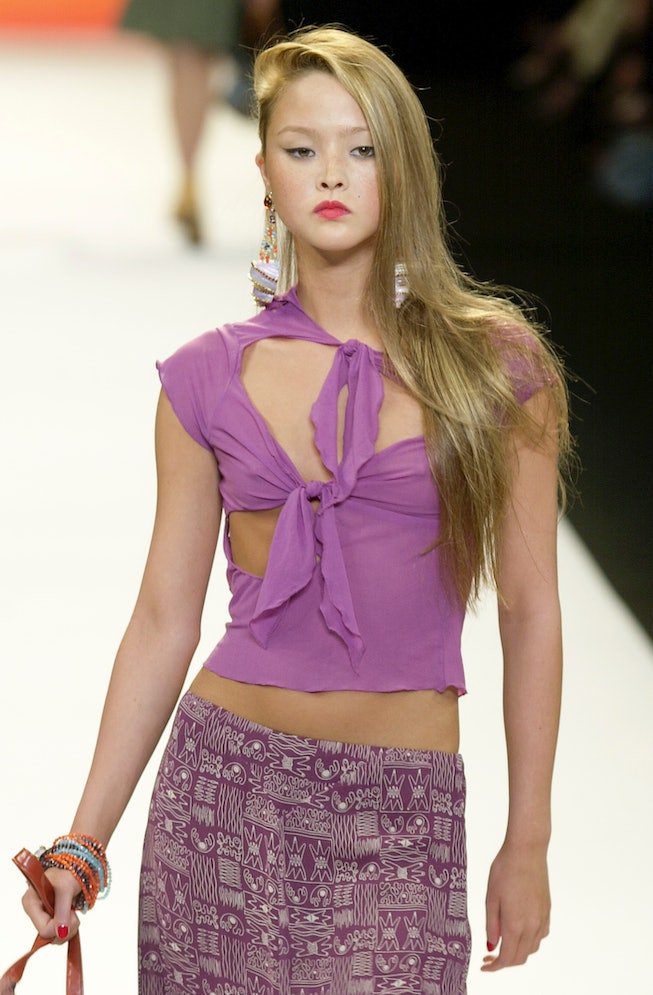 From viral TikTok videos of old runway shows to nostalgic looks on Instagram, Anna Sui’s presence is stronger than ever online. Though her namesake business has been around since the ‘80s, the longtime New York designer is being reintroduced to a whole new generation of young, digital-first fans. Over the past few years, Sui has been giving them her coveted designs from the ‘90s and early 2000s in slow and steady drops — a pop-up with Nordstrom, a collab with Opening Ceremony, and even a Depop shop that offered archive designs from those beloved decades. But now, in a recent capsule collection with SSENSE, she’s officially reviving her cool factor for a more discerning crowd of fashion-savvy shoppers.

“SSENSE started buying our collection two seasons ago, and it was just really interesting to have their incredible eye making the selection because they also knew the background of all of the Grunge Collections and ‘90s stuff,” Sui tells NYLON. “They were always encouraging me, ‘Why don’t do you some of the pieces that you did in the past?’”

The new launch, aptly titled “Blast From The Past,” includes vintage styles from Sui’s Spring 2001 and 1993 collections, ambitiously revamped for a modern-day wardrobe and named after the supermodels who first wore them on the catwalk, including Gisele Bündchen, Devon Aoki, and Liisa Winkler. The pieces are a mix of what’s trending (again), like grunge-inspired striped knits, club-ready fingerless arm gloves, and Y2K going-out tops and dresses made from mesh and covered in knotted ties.

“We had such a great time looking back at my past runway collections,” says Sui. “The styles we picked are perfect for that nostalgia that fashion has been feeling. It’s been in the air for a couple years and now it’s just full on."

Ahead, Anna Sui chats with NYLON about her new collection for SSENSE, looking back on past collections and how recreating them today is different, and more.

What was the inspiration behind the original 2001 and 1993 collections that you’re bringing back with your SSENSE collaboration?

The 2001 collection was really my nostalgia for the Mudd Club. So if you look at the original runway show, the styling is how all the girls looked at the Mudd Club. Everybody had hair swept over to one side — the hair was covering one eye — with big, long droopy earrings, and all those mesh gloves, dark tights, and spiky heels. Everyone that went to the Mudd Club had no money, but they all looked like movie stars. Even the [runway show] soundtrack, I had chosen songs that I remembered from the Mudd Club. It was my homage to the Mudd Club.

Then the 1993 collection was really the grunge collection and that was happening as the music was happening. I think [the team at SSENSE] just really liked the whole vibe, especially the striped pieces, because back in the day, everybody was wearing the striped T-shirts and you can see the layering is very much the whole grunge look from that 1993 collection, especially in the beginning, Naomi's first outfit, it was a combination of army surplus mixed with the rainbow knits and little touches of ethnic sort of things.

Did you update these throwback designs at all for 2022?

They’re all pretty much the same, except, of course, adjusting them to the actual new fabrics. For the previous collections, pretty much everything was American-made as far as fabrication and now nothing is, so the hard part was actually doing the sourcing to find the fabrics. We had to get somebody to make that rainbow stripe, where before there was a company here in New York and you just picked from their color card and you made a stripe and you'd have it in a couple weeks because they would make it in New Jersey or Brooklyn. It was so much easier back then and people had their supplies, they had their colors. You didn't have to specifically dye the colors and it was actually much easier back then to do all that stuff.

But we tried to find as much of a similar type of fabric, like the meshes, as possible. Again, the meshes were all domestic before and this time we sourced them from Italy, and, luckily, we found great colors. So it's just a different way of resourcing. Then we just had to make sure that the patterns worked with the new fabrics.

Your collections from the ‘90s and early 2000s are really resonating with a new generation of fashion enthusiasts. I’m always seeing photos or video clips from your runway shows pop up on social media. Why do you think that time in fashion resonates so much right now?

To me, I really feel that they’re getting the idea that it was much more real back then. My front rows were my friends or they were the boyfriends of the models, or I went to a concert and I would invite the rockstar from the concert to come to the show. It was all very organic. It wasn’t a whole front row with paid people to wear the clothes and carry the bag. It was really almost a party every time; backstage was totally a party because the boyfriends would all be backstage with the models. And sometimes I would even ask some of the guys to walk in the show, like Dave Navarro [for the Spring 1997 show]. There was also an incredible music moment at that same time. So if you listen to the soundtracks of the shows, especially the ‘93 show, it was all current music. It was a moment. It wasn’t fabricated.

Is there another collection from the past that you would love to reproduce or one that you hope gets rediscovered?

It’s funny what people post because I never really look back at the collections. The only time was when I did museum exhibitions. And then I thought, ‘Oh geez, how do we even make all this stuff?’ Again, it was a different time. There were much more resources to find all these fabrics and fake furs and great knits and all that is so hard now.

But a thing that blew up on the internet recently was this one dress from Spring 1997. It was the Fairytale Collection. We’re doing some pieces from that and the one image that keeps popping up is of the glitter dresses with the wings. I would love to do that again. But the company that made that glitter fabric doesn’t exist anymore, so I’ll have to try to find somebody that can do something similar. That photo must come up at least once a week on Instagram.

Anna Sui’s Blast From The Past collection is available on SSENSE and Anna Sui’s website.