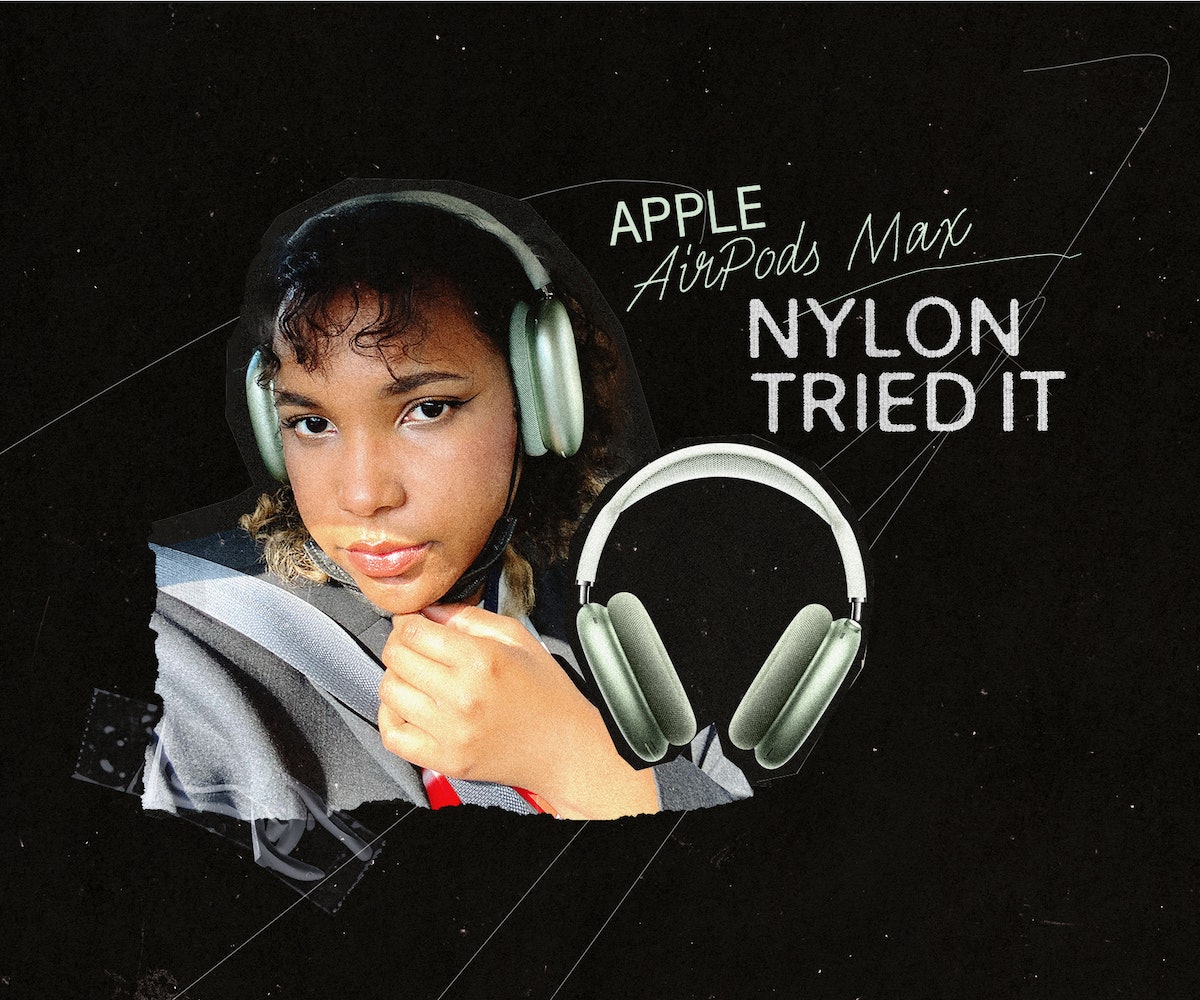 The listening experience has drastically changed over the past decade, and as we’re diving even deeper into fashion nostalgia, the appeal of early 2000s tech, from headphones and flip phones to handheld MP3 players and more, is slowly but surely making a comeback.

Long gone are mini earbuds and flimsy, prone-to-knotting wires. Instead, we present to you: Apple’s AirPods Max, the newest tech accessory must-have for its chunky, wireless, over-the-head style. Though released back in late 2020, the coveted headphones have only recently started popping up on our Instagram and TikTok feeds, and we spotted the gadget throughout fashion month as a rising street style essential, too. It’s also been seen on a bevy of celebrities lately, like Evan Mock, Timothée Chalamet, and Addison Rae, among others.

Compared with its well-known ear-bud AirPods, Apple’s AirPods Max version claims to provide a more elevated listening experience. The wireless headset’s “digital crown,” a rotating button, can play or skip audio, manage volume levels, answer or end phone calls, and activate Apple’s virtual assistant Siri. It also has active noise cancellation or transparency mode (like its AirPods Pro counterpart), and its mic feature is much more advanced, allowing to pick up (and isolate) your voice so it’s loud and clear to the listener. (No wind or background noise should get in the way of your next call.)

For the aesthetically minded, the AirPods Max’s squishy ear cushions (made from memory foam and wrapped in a soft mesh material) attached to sleek shells come in five colors, including space gray (black), silver, sky blue, green, and pink. Wearers have also taken to personalizing their own pairs with stickers and other decorations. In simple terms, it’s like a BBL but for your ears.

The Apple AirPods Max has grabbed quite the attention online with over 131 million views on TikTok alone. Taylor Benda, an 18-year-old fashion business management student at the Fashion Institute of Technology, tells NYLON that she was initially inspired by her college peers to purchase her own pair. “I wanted to buy chunky headphones after seeing a lot of other students wearing them on campus as well as some people on TikTok, like Ruby Lyn,” says Benda. “I think they are so flattering and cute and are a great way to bring the recent earmuffs trend from winter into the warmer months.”

But Benda’s new chunky headset apparently had her followers and viewers divided. After she posted her now-viral video about the AirPods Max, many people were opposed to it. “It was really funny to me that the video got a lot of hate, most notably people saying they looked like earmuffs,” recalls Benda. “But I just thought ‘That’s exactly what I was going for anyway!’”

Alexis Gaskin, a 23-year-old freelance writer, tells NYLON that she’s leaning into the over-the-ear headphone trend for the sake of comfort and convenience. She purchased a pair of Sony headphones from Best Buy during a Black Friday sale.

“They’re wireless and noise-canceling, which are two vital things I look for in my headphones. I absolutely hate wired headphones — I find them annoying and very inconvenient to wear, especially when they get tangled,” explains Gaskin. “I was inspired to buy a pair of over-the-ear headphones because my ears were suffering from the AirPods that I found myself wearing all day. I am big into listening to music and podcasts when I am working, sometimes I don’t even have anything playing, I just use the headphones for the noise canceling aspect so I can focus. After spending eight to nine hours with my AirPods Pros in my ears, I noticed how sore my ear canals would get and sometimes even scabbing.”

Every product has its setbacks, and a major one for Apple’s AirPods Max is the hefty price tag, which starts at $549. Benda mentions that she ultimately returned her own pair. “I made a really hard decision to return the AirPods Max for the Bose QuietComfort headphones mainly because I really wanted to be able to work out in the headphones and the AirPods Max just aren’t great for that,” she says. “Also, I’d like to believe I made the decision on my own and wasn’t influenced by the hate I got on the video; however, I’d be lying if I said it didn’t make me feel the weight of the money I spent. Overall, I still love the AirPods Max and kind of wish I still had them.”

We can’t deny that Apple’s new headphones serve as the Internet’s latest status symbol, as we’re seeing more of the IYKYK crowd — most of whom have the means to comfortably make such a large purchase — getting their hands on a pair for themselves. “Apple’s AirPods Max has been sitting in my shopping cart for months now. I really want them because I am a loyal Apple buyer, but I can’t fathom spending that much money on headphones at the moment,” Gaskin tells NYLON. “Honestly, I thought it was interesting when Apple first announced these headphones because they already sell and own Beats. Is the software any different? Are they actually better? I don’t know.”

Is Apple’s AirPods Max headphones really worth it? See how NYLON feels about the trending gadget, ahead.

I’ve had my eyes on AirPods Max for quite some time, and after seeing my friend finally cop the silver ones just weeks before Apple sent me my own pair to try, I fell even more in love with how the chunky headphone style looked on her. Plus, I needed an upgrade from the second gen AirPods I’ve owned since 2018.

I chose the sage green colorway because — I don’t wanna say it’s because I’m an earth sign, buuuutttt — the Taurus in me just immediately gravitated toward that color.

Once I finally received my package, I was most interested in testing out two things. First, I wanted to know how my listening experience was maximized. I was impressed with the noise cancellation feature, especially while I’m working or commuting around the city, and I couldn’t believe how much chaos and noise was actually around me. Sometimes I use this feature when I simply don’t want to be bothered (respectfully).

I also wanted to see if I would actually enjoy wearing over-the-ear headphones since I haven’t used a pair after owning my old AirPods for years. Would it even be comfortable to wear? Is the sound quality actually different from my old earbuds? If I opt for bright colors like green or red, will it still go well with my outfits? Lots of things to consider!

But I was pleasantly surprised at just how good the listening quality was in comparison to my old AirPods. Because I’m able to drown out the background noise, I can fully hear my music, and I’m also able to focus on my work a lot more intently. It also helps that I’m able to just click the round button on the headphones a few times to pause or change my songs without having to whip out my phone all the time and get distracted by the never-ending notifications.

The best part about having these headphones, in my opinion, is that it goes well with just about any outfit. Though I noticed months before how the AirPods Max was becoming a street-style standout piece, especially during my time at New York Fashion Week, I didn’t actually believe people would notice them until I wore them out. In the city, I’ve had random strangers come up to me just to compliment my headphones — mind you, I was mostly always in a hoodie — and my friends would point out my new headphones while meeting up with them. I also wore them wore around my neck on a date and showed off how cool the sound feature was to him. (He was impressed, to say the least!) I’ve also seen quite a few people wearing the AirPod Max in the other colorways over the past week or so alone, mainly during my commute around the city and, I have to say, the headphones actually do look good even from afar.

Some of my favorite outfits to wear with my green AirPods Max have been pretty simple, as I usually wear them with my go-to oversize blazer and New York Yankees cap. Because of the color and the sleek shelling, the headphones add this nice pop of color to my mostly black outfits or even when I’m wearing pajamas outside. Maybe one day I can pull a Devon Lee Carlson and wear it with a bikini on the beach or poolside. Though, let me just say, I’m not rich enough to replace them in case they get any water damage. Wait, does Apple offer insurance on these?! (Turns out the company does at $59 for a two-year coverage plan.)

Though the price is quite steep, I have to admit that I recommend investing in the Apple AirPods Max if you have the means and are looking for your next “forever” pair of headphones.