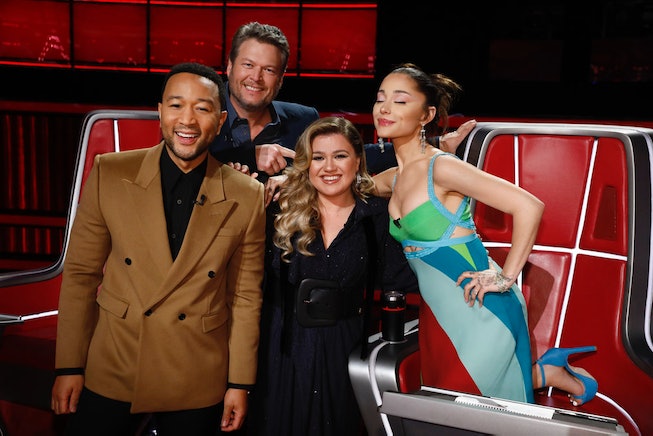 Ariana Grande went for a more nostalgic look on the most recent episode of The Voice.

During the singing competition’s return to live shows on Monday, Nov. 8, the singer and r.em. beauty founder paid homage to one of her favorite rom-coms, donning a multicolored blue and green mini dress from Versace’s Spring 2003 collection, which was styled by Mimi Cuttrell. The vintage silhouette was originally featured in the 2004 film 13 Going On 30, where Jennifer Garner’s character, Jenna Rink, wore during the party’s “Thriller” dance scene. The Positions singer then completed her throwback ensemble with blue heels, translucent beaded drop earrings, a messy bun done by L.A.-based hairstylist Josh Liu, and a subtle purple shadow look by makeup artist Ash K Holm. (Although, we didn’t get to see Rink’s butterfly necklace as a final touch.)

While getting ready for the show, the Grande took it to Instagram to thank Donatella Versace for lending her the vintage number — a six-months-in-the-making project, according to Cuttrell’s Instagram Stories — and celebrate The Voice’s first live show. “Thank you so so so so much @donatellaversace @versace and happy first live show!!! @nbcthevoice #teamariana,” wrote the singer, who joined The Voice as its newest coach in September.

The Versace designer also posted a slideshow of Grande’s recent look on her own Instagram, writing, “My gorgeous girl @arianagrande in Versace SS03 for her first The Voice live show!!! 🦋🧚.”

This isn’t the first time Grande has referenced 13 Going On 30 and Jenna Rink. Back in 2018, the singer also recreated the final wedding scene in her music video “thank u next,” where she wore the character's red peplum blouse and dark-washed jeans while carrying the movie’s famous dollhouse. After its release, Garner approved of the shout-out on her Instagram, writing to Grande, “Every now and then something comes along and just brightens your day. 💫 @arianagrande you’re adorable. Thank you, pretty girl. #thankunext.”

See Ariana Grande channel Jenna Rink in Versace’s Spring 2003 dress, as well as the original scene from 13 Going On 30, ahead.