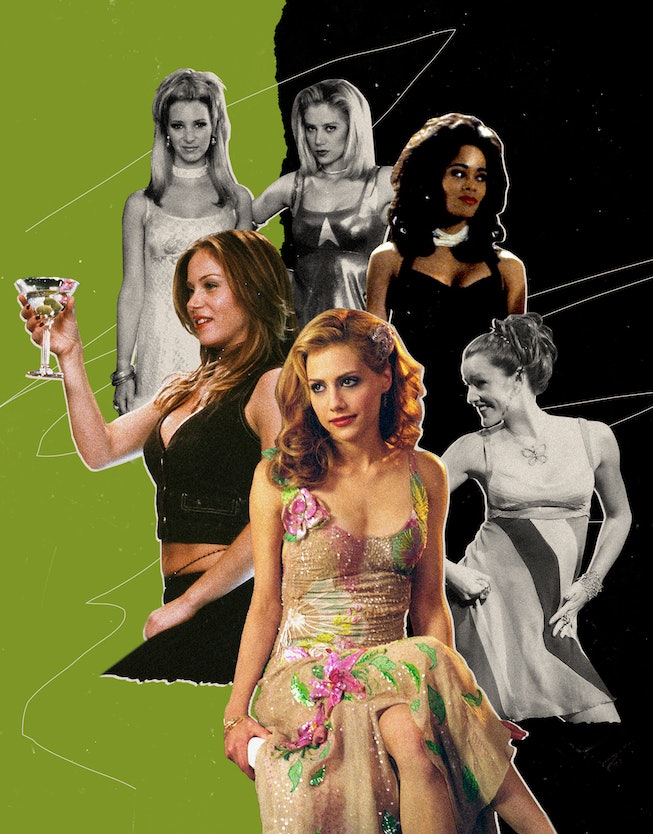 It’s almost summertime and the world is opening up, which means that we’re all wearing less and going out more, literally. Chances are you and your wardrobe could use a little refresh — maybe even its own little makeover montage. Sweatpants have been our savior over the past year, but it’s time to make room for some pizzazz, especially with all the parties, reunions, get-togethers, karaoke fests, and shindigs on the horizon. But where to even start?

It may seem overwhelming to curate your own going-out wardrobe, but it might be easier than you think. In fact, you might even find your own style muse within hands reach, like in your Netflix queue. After all, anyone who’s ever tried to replicate an outfit they’ve seen in a movie knows that the best places to find sartorial inspiration lie just within the silver screen. (Thank you, costume designers!)

From Cher Horowitz’s Clueless-famous Alaïa party dress to Nomi Malone’s “Versayce” looks in Showgirls, there are plenty of pop culture fashion icons to inspire your own going-out wardrobe. There’s gotta be a bigger purpose to all that binge-watching we do, right?

Ahead, find 20 of the best party outfits from our favorite movies and TV shows so you’ll be ready for all the heavy clambakes you’re getting invited to. (Clueless reference, duh!)

There are a plethora of stunning outfits in Clueless, but it makes the most sense to celebrate the looks that Cher and Dionne wear when they actually go to a party. Cher plays “Suck and Blow” with her friends in her iconic red Alaïa dress (before she gets robbed and is forced to lie down on it), while Dionne looks fabulous in a Dolce & Gabbana floral crop top that matches the ribbons in her braids. The bell sleeves on Di’s top are perfect for the ’70s-inspired trend currently happening.

I don’t know about you, but my winter formal dress looked nothing like the one Euphoria’s resident style icon, Maddy Perez, wore. The two-piece sparkly mesh outfit, which features a halter top with an O-ring, looks more suited for the club than a high school dance, so we give props to Maddy for not getting sent home. The show’s costume designer found inspiration for the look from an interesting source: Rose McGowan’s “naked dress” at the 1998 MTV VMAs.

When Romy and Michele tossed their “businesswoman special” outfits aside for holographic spandex minis, it became a moment that would live long inside of our memories. The blue and pink dresses are ideal garments for an adventurous night out, especially if it involves an impromptu dance to “Time After Time.” Costume designer Mona May had planned to put Michele in a hand-painted chiffon gown, but Lisa Kudrow suggested she match Mira Sorvino’s look instead. Brilliant!

Sure, Elle may have been tricked into wearing a costume — specifically, a Playboy bunny suit — to a Harvard party, but she looked better than anyone else there. (I’m still haunted by the stuffy turtleneck and sweater Selma Blair’s character wore in the scene, honestly.) A bunny suit might not be typical going-out garb, but if you feel compelled to wear it through the Taco Bell drive-thru, I’ll gladly co-sign.

After dethroning Regina George as queen of The Plastics, Cady (Lindsay Lohan) throws a house party during which she plans to steal Regina’s man. Her strapless satin dress is simple yet makes a statement, which is that you can wear pink on other days besides Wednesday. If you plan to copy this, you can pick up a replica at Underground Costumes. (Just don’t wear it with visible red bra straps, like Cady did.)

Robin (Lela Rochon) was dragged to a sketchy party by her date, but her outfit more than made up for it. Her white dress featured knotted midriff cutouts, an ideal look for a pool party or a beachside getup. Basically, it’s our summer dress dream.

In the beginning of Uptown Girls, Molly (Brittany Murphy, RIP) quickly throws together her birthday outfit, which consists of a sequin nude gown with pink and green floral appliques. But the genius accessory that she DIYs in seconds — a mini lampshade fashioned into a barrette — deserves its own applause. It shows that you can create a whimsical, unique look out of anything.

10 Things I Hate About You: Bianca’s Prom Look

In this ’90s teen classic, Bianca (Larisa Oleynik) took a creative and modern twist (for that time, but also now) for her prom look. She pairs a pink crop top with a tulle skirt — a sweet look that proves separates can totally work for fancy occasions.

The red satin cap-sleeved dress that Destiny (Constance Wu) wears is a solid party look, but don’t discount that “SEXY” choker. Oversized word jewelry may be tacky to some people, but in the age of maximalism and general IDGAF-ness, we should simply be wearing more of it!

‘Twas not Aristotle who said, “It’s a Versayce.” It was Nomi Malone (Elizabeth Berkley) who unforgettably uttered (read: butchered) the design icon’s namesake in the B-movie classic Showgirls. Doesn’t matter, though, because she looked incredible in both of her “Versayce” looks. The metallic skirt suit (which was also worn by Brandy on the ’90s red carpet) is something that lives in my mind rent-free.

A black velvet dress with a slip and a sweetheart bust is a classic party gown style that also evokes a retro-inspired Hollywood siren style, and bad*ss Jacqueline (Robin Givens) in Boomerang pulls it off like no other. The pearl jewelry and the red lip? Timeless.

The Versace dress Jenna Rink (Jennifer Garner) wears to her magazine’s party is definitely one of the most iconic 2000s movie looks. The bright colors, the playful cutouts, and the oversized butterfly necklace is something that we should all be wearing this year because it’s just so fun. While the actual Versace dress was never mass produced, thankfully, there are costumers who make replicas of it on Etsy.

Never Been Kissed: The Barbie Costumes

They may technically be costumes, but the Barbie-inspired outfits that resident mean girls, Kirsten, Kristin, and Gibby (Jessica Alba, Marley Shelton, Jordan Ladd) wear to prom (unplanned, apparently) are summer outfit goals. The flamboyant headpieces and supersized earrings take these looks to another level.

Coyote Ugly: Violet (And The Rest Of The Bar)’s Low-Waisted Looks

Now that low-waisted flared pants are back, let’s hope that suede crop tops are to follow. Why? Because you’ll be able to get your Coyote Ugly on. Plus, it’s the perfect look to karaoke “Can’t Fight the Moonlight” in.

Fur-trimmed (and preferably faux) everything is super hot right now, so let’s celebrate an often overlooked fur outfit icon: Josie (Rachael Leigh Cook) of Josie and the Pussycats. There’s a lot of leopard print in this movie, of course, but her all-blue outfit, complete with floor-length fur robe is the cherry on top. It’s a real entrance-making piece, hint hint.

The Sweetest Thing: The Girls’ Clubwear

If you want the ultimate party look, find something that glows in the dark. Julia Fox’s white crop top and Christian Lacroix python pants look for the club scene in Uncut Gems was sort of a happy accident. Costume designer Miyako Bellizzi told NYLON that the ’70-inspired top was custom-built with a shiny white fabric and was pulled together after she cinched it with one of her hoop earrings. Once the lights went off and her outfit became illuminated, that was the moment. (And maybe the most iconic blacklight scene since 1998’s Belly.)

Parker Posey has always been a fashion icon, but Mary, her Party Girl character, should be referenced as much as Cher Horowitz, in my opinion. A club-kid-turned librarian, Mary works all kinds of note-worthy looks, but there’s just something about the film’s satin blue glove moment. Maybe it’s because it’s the scene where three of the film’s most memorable lines are said. Then again, long evening gloves are poised to make a comeback (thanks in part to Bridgerton).

Issa Rae wears a lot of cute looks in the hit HBO series, but this black-and-white cutout dress in Season 2 is a favorite. After an outfit montage where she tries on different looks, she decides on this dress to wear to a party she throws (to low-key impress her ex who never comes). Show up at your own possible-ex-will-be-there party in a similar style (jug of cheap wine is optional).

The Nanny: Fran’s Turnt Up LBD

It’s almost impossible to choose just one outfit of Fran Fine (Fran Drescher) to discuss. But maybe it’s best to go with a classic LBD for a Nanny-inspired party look. The thing is, Fran can manage to turn up anything, even the simplest ensemble. Not only does the bodycon silhouette on this dress look amazing on her, but her signature heart-shaped Moschino bag elevates the entire look, making it funky and fun. The Fran Fine lesson? Make a simple look more going out-friendly by jazzing it up with outlandish accessories.

NEXT UP
Culture
The Celebrity “Nepo Baby” Obsession Doesn’t Matter
Culture
Lindsay Lohan’s New Style Era Is Sweet Redemption
Fashion
The Mini Skirt Was The Must-Have Celebrity Fashion Item Of 2022
Culture
On The List (With Melissa Rich): Is The Party Venue Recession Upon Us?