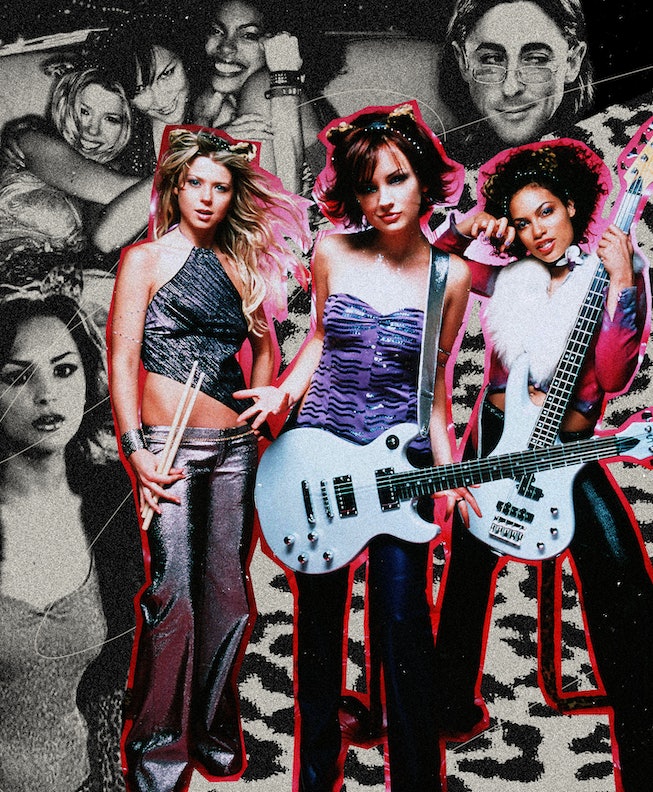 When Josie and the Pussycats, written and directed by Harry Elfont and Deborah Kaplan and starring early-aughts It girls Rachael Leigh Cook, Tara Reid, and Rosario Dawson, was released in 2001, it bombed at the box office and received mixed reviews. With its sharp satire of pop stardom and over-the-top aesthetic, the comic-based film was simultaneously ahead of its time and a perfect document of a specific moment just before the record industry imploded and the internet took over.

Now, 20 years after the film’s release, it has developed a cult following composed equally of millennials who saw it when it came out and Gen Z-ers who weren’t even born at the time of its release. The costuming in the film is one of its most memorable elements: The actors wear gloriously flashy ensembles, and their journey from garage band to pop sensation can be tracked by the evolution of their increasingly maximalist wardrobes.

Costume designer Leesa Evans gave the film an unforgettable sense of visual humor and fashion inspiration that can be directly traced to some of today’s sartorial trends on social media. In addition to working on Josie and the Pussycats, Evans assisted on Clueless and costumed American Pie and a number of Judd Apatow and Paul Feig films, among many others. In short, she’s a pro when it comes to contemporary comedy.

“I found a unique opportunity to raise the bar of what comedic fashion might be conceived as. Like, comedy equals funny, costumes should be funny, acting should be funny,” Evans tells NYLON. “But what I realized was creating more drama and fashion reality in the costumes sometimes balanced out the comedy in a really good way.”

In celebration of the film’s milestone anniversary, we spoke to the costume designer about her fabulously bold work and how it holds up two decades later.

The costumes gave a nod to the original Pussycats.

Evans was already well-acquainted with the Josie and the Pussycats comics and Saturday morning cartoons on which the film was based. “I loved them when I was younger. I thought they were so cool, and I was definitely inspired by my childhood,” she says. “I wanted to hit that note for people like me who loved it growing up and also give it a new life for people who weren’t familiar with Josie and the Pussycats, like there is actually a way to incorporate cat ears into your outfit and it looks cool.” When it came to costuming Rachael Leigh Cook’s Josie, the designer used “a lot of animal prints, just to give a nod to the original Pussycat fashion.”

The film’s satire on product placements and “branding” would still resonate today.

As soon as Evans found out there would be a Josie and the Pussycats film, she was determined to be a part of it. “I didn’t know Harry Elfont and Deborah Kaplan, but I knew I wanted to do the film. I had friends that knew them and was like, ‘Please get me an interview; I’ve got to do this film,’” recalls Evans. “I walked into the room, and within the first 15 minutes, I became great friends with them. It was so much fun to work together. Every idea was being thrown back and forth and we were coming up with a fun way to express the comic themes within the big picture. Deb and Harry are still my really good friends.”

Evans and her collaborators still look back on the film with much affection: “It’s such a fun project to have done together, and I’ve heard from so many people how much they love the film. To hear that 20 years later is quite cool. If it came out now, it’d be a huge hit.” Much of the film’s satire is prescient when it comes to the proliferation of product placement and the significance of “branding.” As Evans puts it, “Deb and Harry wrote a really modern story of where we were heading, and we just didn’t know at the moment how far we’d really lean into that.”

As the devious record label CEO Fiona, Parker Posey wears a variety of extravagant outfits that are equal parts high fashion and caricature. Evans drew inspiration from her own deep knowledge of the fashion industry: “I have all these incredible avant-garde fashion books that I’ve collected over the years. I see fashion as art, and I thought of her character as wearing things that were so artistic they almost couldn’t be worn as street style, like you would see it in a museum or in a runway finale — every single one of her outfits is like that. I was thinking of things that would have that element of avant-garde, high fashion with equal parts whimsy and a sense of the ridiculous.”

The designer pulled further visual references from past decades, too. “There’s some '70s influence in the film since that’s the inception of the cartoon, but I used a lot of '50s elements, as well, especially in her costumes. The '50s had this classic elegance that is undeniably beautiful. I thought that would be a good balance for her crazy avant-garde costumes.”

It was important to give the band a cohesive look while maintaining an individual sense of style for each of the leads.

“Because the girls were best friends and in a band together, it gave us a lot more opportunity to coordinate their looks. Normally, I always lean a little bit into that in terms of color,” says Evans. “A lot of times, people are afraid to have two actors in the same scene wearing red. But to me, the best case scenario is tone-on-tone color, so I want two people to be in red — one in red and one in burgundy. I do that in most films. In this film, I doubled down on it.”

When it came to costuming the band, “it was about finding the shapes that captured who they were,” Evans says. “In Tara Reid’s character’s case, her whole thing was tripping upward, so there was this idea of ‘Oh, her pants are so low! But somehow they stay on!’ Her tops seem like they just have a tiny piece of tape attached. She had a free spirit, and there wasn’t anything about her clothes that was encumbering her experience. It was an ‘I am who I am’ kind of thing, and only certain clothes say that.”

Throughout the film, Josie deals with the challenges of rising fame and being thrust into the spotlight, with a change in wardrobe to match. Evans knew she had to keep things simple to start off: “In terms of Rachael Leigh Cook’s character, there are certain shapes that made her be the no-nonsense girl who doesn’t want to fabricate things too much. In the beginning, she’s a T-shirt-and-jeans person, like a tomboy who wants equality in terms of the girl band versus the boy band. She’s just a cool girl who wants to be a great musician. Capturing her character in the beginning, it’s not overdone, it’s just effortless and just her.” In Evans’ creative process, “you find these adjectives and notes to ground the character in and you live in that world of what those personality traits are, and certain clothes really support those traits.”

The iconic early-aughts wardrobe of the film was almost entirely custom-made.

Given the film’s heightened style and focus on setting new trends, Evans made a point of not getting costumes off the rack. “I made about 90% of the clothes,” she recalls. “We were coming out of the grunge '90s period and having things that were matching or fitted wasn’t as popular. Wider-leg pants and low-rise wasn’t in, so I needed to create this look that was also paying homage to the comic and cartoon, but it just wasn’t out there. So we set up shop and made almost all of the clothing.” Judging by how dynamic the film’s looks still appear, it’s obvious that Evans was ahead of the curve with her styling.

“I come from a fashion background, so I always wanted to bridge the gap between fashion and film,” says Evans. “Sometimes as a costume designer you’re really focusing on character, and fashion is too much for a character,” she continues, but when it came to the heightened world of Josie and the Pussycats, “this was one of those rare opportunities where fashion could really be infused in the characters in a profound way.”

Evans brought all of her fashion knowledge to the film to make things as authentic and stylish as possible: “I was doing a lot of trend forecasting to really look at what would not only be popular in a year from when we were filming but in the future, what would be a timeless look even within the trends,” she says. “It thrilled me at the time that we were picking up on trends like those incredibly low-rise pants.”

Looking back two decades later, Evans notes, “so many of those fashion elements are coming full circle again so quickly. Twenty years is not always so quick, but it’s quick in terms of that cyclical tone of fashion.”