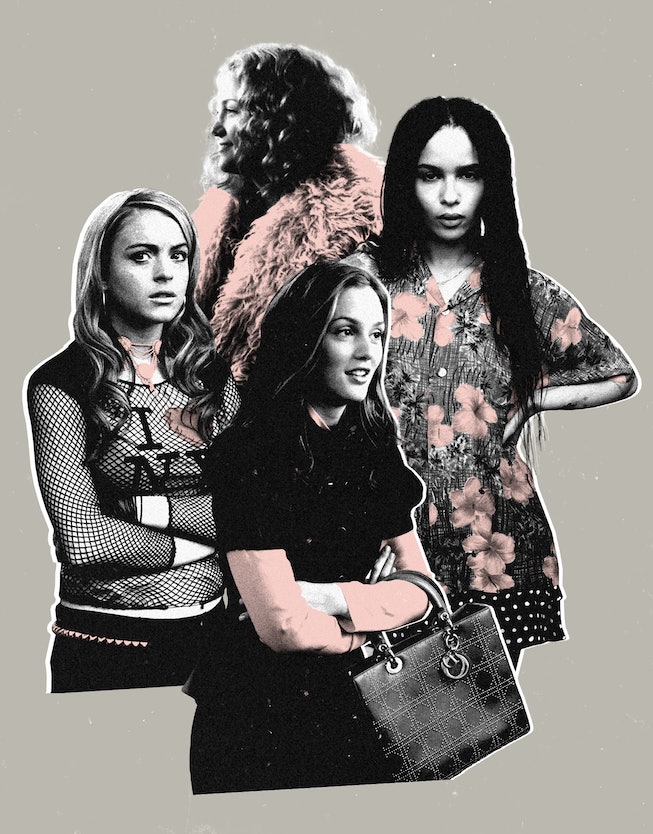 Pop culture, nostalgia, and fashion go hand in hand — just take a look at the recent fanfare over the 20th anniversary of Josie and the Pussycats or the beloved Y2K aesthetic of Lizzie McGuire. Sometimes, some of us just miss the days of wearing flare pants and platform sandals, and with the help of streaming platforms, plenty of Gen Zers and millennials alike have been turning to the TV shows and films they grew up watching as a source of fashion inspiration.

In a recent YouTube video for Vogue, the sister trio behind the Grammy-nominated band Haim showcased every outfit they would wear in a week. For one of the days, bassist Este Haim wore a vintage Jean Paul Gaultier top that I found eerily familiar: It’s the top that Lindsay Lohan wore in Confessions of a Teenage Drama Queen, when her character auditions for a role in the school play by singing a song by her favorite (albeit fictional) band, Sidarthur.

Evidently, I had to find out if Este knew the pop cultural significance behind this top because, although it makes for a very Vogue-worthy outfit, it’s so much more than that. As someone who was 6 years old when Confessions of a Teenage Drama Queen came out, I quite literally grew up watching — and loving — this iconic film, which came out two months prior to Mean Girls’ release in 2004.

Fortunately, Este revealed to NYLON just how she came to own this treasured top, and yes, she is aware of the shirt’s importance within pop culture. “I was working at Wasteland, a vintage resale shop in Burbank, back in 2010 when this really cool girl came in to sell her clothing. I was at the buying counter with my best friend, Grover, and I pulled out the JPG top and thought, ‘Wow, this is sick.’”

It was at this moment that Este turned around to show her friend the shirt, to which he responded by snatching it out of her hands and telling her, “If you don’t buy it, I will.” Este replied by saying she knew she had seen this top before, but she couldn’t remember where, so she asked Grover if he knew where it was from. He “was trying to play it cool in front of the customers, so under his breath he said, ‘Just take it and I’ll tell you later,’” recalled Este. “So I bought it, and after work, Grover sent me a still from Confessions of a Teenage Drama Queen of Lindsay Lohan in that top and then texted, ‘Life can be so randomly beautiful.’”

Of course, it’s not just Este who appreciates (and wears) fashionable pieces worn in a well-known productions from yesteryear. The editor-in-chief of Fashionista.com, Tyler McCall, is, in part, known for her love for Gossip Girl — see her Instagram series #WaldorfWednesday and #SerenaSaturday for proof — and that translates into buying and wearing pieces worn in the show. This includes a pink-and-white floral Balenciaga dress found on The RealReal (as worn by Blair Waldorf in the Season 4 finale of Gossip Girl) and a crystal headband from a Jennifer Behr sample sale. “Because I’m so familiar with the show, I’m pretty good at spotting pieces on The RealReal or eBay,” explains McCall. “But I’ve also searched dedicated terms — namely, ‘Blair Waldorf’ — on sites like Poshmark.”

Another show that offers nostalgic style inspiration is High Fidelity, which stars Zoë Kravitz in a romantic comedy series based on the 2000 film of the same name, which starred her mother, Lisa Bonet. Although the series was canceled after just one season, its fashion influence remains as strong as ever. Case in point: Liza Sokol, the senior audience development manager of Fashionista.com, has purchased several pieces that are either exact (or very close) matches from the show, including the Dickies T-shirt and pleated mini skirt ensemble that Kravitz’s character, Rob, effortlessly rocks in the streets of New York City.

Sokol managed to find the exact top on Amazon as well as a similar tennis skirt elsewhere, and she already owned the same low-top Vans paired with white crew socks. “I like to imagine that anyone who is a fan of the show would see me on the street and ‘get it,’ like a secret joke in between friends, especially because the show was erroneously canceled,” she proclaims. “Justice for Rob!”

With the rise of ’70s style influencing the latest trends, Almost Famous is back in the sartorial limelight, mostly thanks to Penny Lane, played by Kate Hudson. La Carmina, a fashion blogger from Vancouver, joined forces with a friend to hunt down vintage coats similar to the shearling-and-suede one Hudson rocks in the movie. “One of my best friends at school, Molly Weingart, was also a fashion lover and entranced with the movie,” says La Carmina. “We often went shopping and dressed up for parties together, so we made it a mission to find matching coats like hers.”

The duo then headed to vintage stores around St. Mark’s Place in the East Village, and they both managed to find coats that perfectly suited the Penny Lane aesthetic. Just as the character they sought out to emulate did, La Carmina and Weingart snapped photos of their city escapades, which included “hobnobbing with artistic New Yorkers and drinking the free wine” at an art gallery opening.

In addition to resale sites like eBay, Etsy, and Poshmark, WornOnTV.net is another valuable fashion-in-pop-culture resource since the website launched in 2012. In total, Linda Wilks, WornOnTV’s founder, has found more than 93,000 exact matches to pieces worn in more than 350 shows, as seen in some 61,000 outfits. Finding these items is not always an easy feat. As Wilks reveals to NYLON, “If the character regularly wears the same brands or stores, that is always a good starting point. If that is unsuccessful or I don’t have that info, then I head to Google and use very specific keywords that relate to the item. The keywords have to capture unique elements about an item that sets it apart from anything else — Googling ‘red dress’ is not going to be enough!”

Unsurprisingly, this shopping phenomenon exists beyond the internet. A store in Burbank, California, known as It’s a Wrap solely sells clothing worn on the big (and little) screen, thanks to an impressive list of studio clients that includes NBC, CBS, Warner Bros., Paramount, and Sony. The store, which celebrates its 40th anniversary this year, counts pieces from Friends, Seinfeld, Jane the Virgin, Star Trek, and The Office as its most popular items, says longtime owner Tiara Nappi. One of the best items she’s sold over the years? The Puffy Shirt worn by Jerry Seinfeld in a 1993 episode of Seinfeld.

Clearly, shows and movies — both in the past and in the present — have long influenced what we wear. Look no further than the impact of Bridgerton’s fashions and the subsequent rise of the Regencycore aesthetic, as well as the stylings seen Grown-ish, Emily in Paris, The Undoing and Coming 2 America. Plus, the Gossip Girl reboot, which is still in the process of shooting, is already being praised for its fashion choices (based purely on paparazzi shots) ahead of its official debut on HBO Max sometime this year.

Although the pandemic may have limited our ability to find fashion inspiration in person, what we’ve been keeping up with on our laptop and TV screens have more than quenched our sartorial appetite — and they will surely continue to do so for years to come.