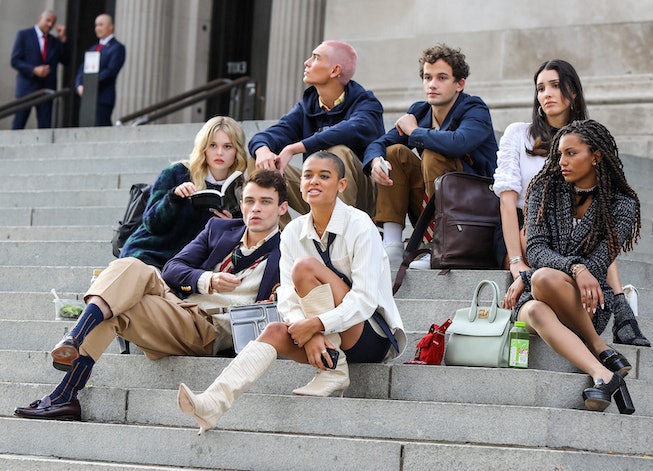 Personally, few 2021 things are more exciting than the imminent arrival of HBO Max's Gossip Girl reboot. Ever since the series was first announced, way back in 2019, it's all I can think about. I've freaked out over the slightest tidbits of news: casting announcements made me drop everything (particularly when they involved the addition of OG blogger queen Tavi Gevinson), leaked on-set photos sent me down conspiracy theory spirals, and by the time the show's official Instagram account surprised eager fans with a series of one-word character descriptions, I was ready to risk everything to break into the Warner Bros. offices and steal some advanced footage. Thankfully, I have some sense of self-control and have since kept patiently waiting. And now, I'm being rewarded for my efforts in the form of a recent cover story in Dazed Magazine featuring four of the series' stars: Emily Alyn Lind, Jordan Alexander, Whitney Peak, and one-time Calvin Klein campaign star Evan Mock.

These four actors represent just a fraction of the characters set to recur in the highly-anticipated HBO Max original, but according to them, filming with the wider cast has been quite the fun experience so far — even more so thanks to the additional COVID restrictions and protocols. On set, the cast have to be tested twice a day — which is, of course, not easy — but they also all agree that the "bubble" they had to create amongst each other has ultimately worked to their advantage. "It’s really important to create that sense of bonding between all of us, because that’s the point of the show," Jordan Alexander says. "The interconnectedness of this group – who we are around this or that person and what elements of the character are brought out when they’re allowed to be that version of themselves with that character."

Though the central quartet were careful not to give away too much about the show, their interview did offer a few revelations. Alexander, who plays a character named Julien Calloway, lets slip that her character is popular. "I thought Julien was powerful and deep – she was more than that typical high-school popular girl," she says. "She has an interesting, powerful undercurrent." (Fittingly, Julien's one-word character description was "influence.") Emily Alyn Lind's Audrey Hope (described as "grace"), meanwhile, is "a really well thought-out character" and Whitney Peak's Zoya Lott is "really cool" (a nice call to her one-word description of "perspective").

Later, the cast seemed to confirm Joshua Safran's initial promise that this version of the hit teen show would be much queerer. "We're making a series in 2020 and 2021," Lind says about the subject. "It's really important for us to not just talk about these things but also express them as normal things that kids deal with...it just exists. It's about normalizing things that used to be different or taboo." Alexander, who is queer in real life, echoed these thoughts, adding, "People are allowed to just be there and be whatever they are — whether it's queer or not."

This extends to the overall gender dynamics in the show, as well. While the original Gossip Girl has been recently scrutinized for its casual depiction of what was essentially an attempted rape in its pilot episode, this new version of the show seems more prepared to tackle these issues in a sensitive, complex manner. "Gender roles will be talked about and dissected," says Lind, later adding, "A lot of the women in our show are very powerful...we’ll be exploring what it means to be a woman in this generation." Peak expands, "It’s also just humans being humans, doing what they wanna do instead of being fit into, ‘This is a man, this is what a man is supposed to do.’ I think it’s a pretty raw take on the kind of lives that we’re trying to portray on screen."

Of course, the cast couldn't end their interview without talking about what is maybe the most important part of Gossip Girl's enduring legacy: the clothes. Luckily, from the looks of it, in this evolved version, fashion will be just as integral to the story as it was back in 2007. Lind describes her experience working with costume designer Eric Daman as "such a trip," saying, "You go into your fittings and you just feel like you’re six years old, playing dress-up every day." (One of her outfits costs $25,000, which freaked her out.) But Alexander stresses that the fashion in this updated version won't just be fashion for fashion's sake. "There's a trademark style for everyone," she says. "It's not just cool fashion. It's something that reflects who the characters are."

For what it's worth, Evan Mock thinks his character — who was apparently written for him ("I’ve been looking at your face for the last two months," Joshua Safran told him before asking him to film an audition tape) — actually dresses more modestly than the first-time actor usually does. "The girls are really stepping up and wearing the craziest things — me, not so much," he tells Dazed. "I'll be more subtle. It's not as crazy as I would dress in real life but it's pretty unique."