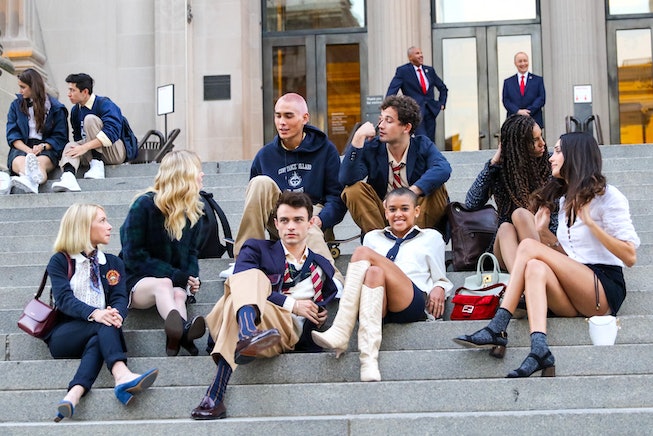 Last night, right as I finished the latest episode of The Bachelorette and before I turned on HBO's sexy banker drama Industry, I stumbled across an image that stopped me dead in my tracks: a group of seven, immaculately-dressed adults-cosplaying-as-teens, sitting side-by-side in a small cluster on the steps of The Metropolitan Museum of Art. As a dedicated fan of Gossip Girl, that early-aughts messy teen drama about over-privileged teens living quasi-independently in Manhattan, the image was immediately recognizable. Sure, this wasn't Leighton Meester's Blair Waldorf or Blake Lively's Serena van der Woodsen, but it doesn't take a brain scientist to deduce the obvious. This is the next generation of Gossip Girl acolytes — and boy, am I excited.

The fate of the upcoming reboot of Gossip Girl has been up in the air for a while. News that it was in development first trickled out in the summer of 2019, when it was announced that the new iteration would take place in the same universe as the original CW series, albeit eight years down the line and with a completely new cast. Once again, Joshua Safran would return as an executive producer and writer. From then on, details about what to expect slowly emerged: The Good Place's Kristen Bell would return to narrate the series as the titular Gossip Girl, social media would play a huge role in the latest plots, and according to Safran, there would be a much larger focus on diversity (race, gender, sexuality, class) this go-round.

Eventually, the rest of the cast fleshed out: Revenge's Emily Alyn Lind would be playing the lead, while other characters would be played by Rookie Mag creator Tavi Gevinson, Chilling Adventures of Sabrina's Whitney Peak, Pretty Little Liars: The Perfectionists' Eli Brown, Lethal Weapon's Johnathan Fernandez, Broadway actors Jason Gotay and Adam Chanler-Berat, High Fidelity's Thomas Doherty, and relative newcomer Zión Moreno. There was so much to be excited about that the news that production would be significantly delayed thanks to the ongoing COVID-19 pandemic almost broke me — and I'm sure I'm not the only one.

Which is why, I guess, last night's sighting of this picture on the steps instantly mended me. I am healed. Production is back on, the kids are back on The Met steps, and suddenly, I have officially been cured of all ailments. That these people look eerily similar to Gossip Girl characters of past only adds to my obsession. There is Emily Alyn Lind on the far left, giving her best Taylor Momsen impression as she blankly stares at something in the distance. Next to her is Thomas Doherty, looking delightfully menacing as a reincarnation of Chuck Bass. The adorable floppy-haired Eli Brown, sitting smack-dab in the middle of the group, could give Dan Humphrey a good run for his money — and he'd probably win since he looks more put-together than the producers ever let Penn Badgley look. And Zión Moreno? She's clearly perfected the disaffected head-tilt.

Even the later additions are communicating so much without saying anything at all. Savannah Lee Smith, a current NYU Tisch student who was cast in April (her first IMDb credit), could very easily be a stand-in for Blair Waldorf with her immaculately tailored Chanel tweed suit and platform crocodile skin loafers. (And wouldn't it be wonderful to see a Black girl running the show for a change?) Singer-cum-actress Jordan Alexander, who was cast in August, is giving the edgy cool-girl vibe I need to disrupt the prim, proper, and polished world of Constance Billard and St. Judes. The bald head? The oversized men's shirt and tie? The knee-high boots? Yes, yes, and yes.

And then there's Evan Fucking Mock, the boy who made skateboarding hot and modeling cool. After joining the cast mere weeks ago in early October (another debut IMDb credit), there he is, just sitting there, looking absolutely gorgeous as he stares at nothing and no one in particular. Sure, his signature pink hair might be doing a lot of the work here, but come on now, it's Evan Mock on Gossip Girl. Let me gag a bit.

But what does it all mean? If a picture is worth 1,000 words then multiple pictures must be worth at least several million? So after spotting the picture on the steps, I did some digging and very quickly found more pictures from the Gossip Girl set. It's safe to say this didn't stop my wildly imaginative mind from creating more fantasy scenarios in my head.

First up is Tavi Gevinson, who was spotted standing next to Adam Chanler-Berat in what could very easily be the courtyard of Constance Billard. Though details about either of their characters are currently unavailable, I was pleasantly surprised to find her dressed rather conservatively and standing next to someone who very clearly was playing an adult. Is it possible, I wondered, that the 24-year-old Gevinson was actually cast as a 24-year-old and not as a teenager? As we all know, Hollywood loves to cast 20-somethings as children these days, but the photos of Gevinson have me hoping that she's playing a very young, cool, in-the-know teacher. Or, I don't know, a guidance counselor? Come on, Joshua Safran. You know what I want!

I got to thinking again when I stumbled across a photo of Jordan Alexander, Zión Moreno, and Savannah Lee Smith standing outside during a nighttime scene, each one very obviously dressed in a going-out gown. They all look stunning, of course, but I was more comforted by the fact that we would yet again be treated to scenes of teenagers going out to decidedly adult-minded events. Where are they headed? Who knows! But it's guaranteed that the alcohol will be flowing in abundance and I wouldn't be surprised if some finely-grated white powder ended up a few people's noses. This is the 1% we're talking about, after all. I mean, look at Jordan! If I'm not mistaken, she's literally wearing a Christopher John Rogers gown that was just shown a month ago. That's access, honey. Private buyer teas!

And finally, I landed on a picture of Whitney Peak, slowly walking away from the group congregated on The Met steps, dressed in a rather straightforward uniform dress, shirt, and...wait...are those...tennis shoes? Perhaps more than anything, this is the photo that might tell me the most about what I should expect from this reboot. Next to a group of women in towering platforms, knee-high boots, and strappy sandals, Peak's choice of admittedly pristine white Adidas and matching athletic socks clearly stick out. I mean, yes, those are Adidas from the recently sold-out IVY PARK collection...but they're still Adidas! There's no way she's "from" this world, right? She must be a transfer? A scholarship student? A female version of Dan Humphrey that actually comes from the working class? (Because let's be real, the Humphrey's Brooklyn loft does not come cheap.) Safran said the reboot would examine "where wealth and privilege come from" — so maybe Peak's character is where it all starts?

Either way, I've become excited in a way I haven't been before. In my humble opinion, reboots and revivals can be extremely hit or miss. For every 90210 or One Day at a Time, there's also a Roseanne and a Fuller House. Some reboots instantly make themselves worthy on premise alone (like the upcoming Jodie-focused version of Daria), but in 2020, as we're trying to actively dismantle the concentration of wealth at the top 1% of the nation, another show about rich kids behaving badly could be somewhat ill-conceived. But these photos, combined with Safran's commitment to use this latest iteration to tackle issues like class, wealth inequality, sexuality, and race, have me hoping that Gossip Girl 2.0 might actually be worth its weight in solid-gold bangles and Cartier love bracelets.

But even if not, at least I'll get to stare at Evan Mock's pink hair for a solid ten hours. That's worth it, right?