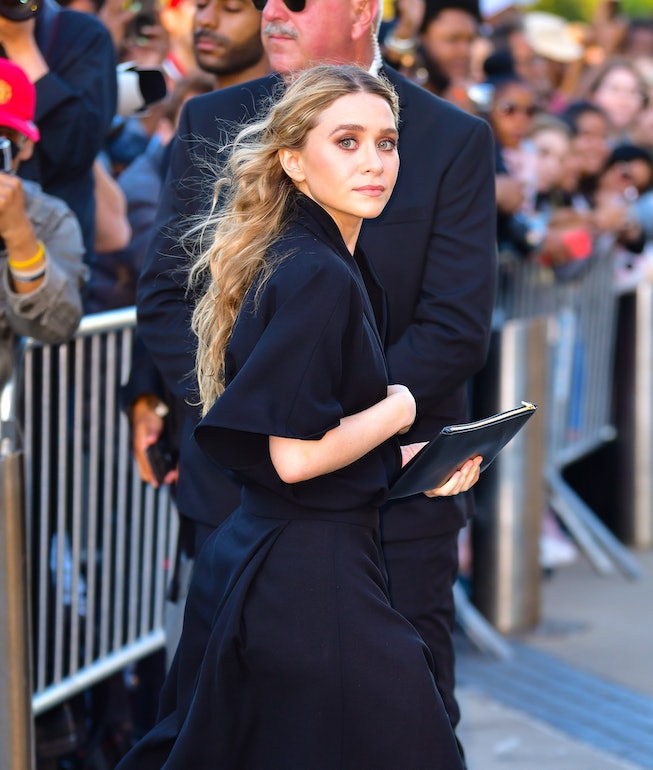 Following her viral online moment for carrying a machete in the woods, Ashley Olsen made a rare public appearance out in New York City over the weekend on a date night with her boyfriend, Louis Eisner. For their dinner at Balthazar, Olsen stayed true to her signature aesthetic, wearing an all-black look (sans machete) with a matching bag and sandals from The Row.

Olsen and Eisner, an artist, have been reportedly dating since as early as 2017 with their first outing together as a couple at the Hammer Museum’s Gala in the Garden in October of that same year. Since then, they’ve been extremely low-key with only a few public sightings, which explains why there was so much chatter on the internet about Olsen (and her machete and beer). The recent photo was actually shared by Eisner himself on his Instagram Stories, and while that particular post only lived online for 24 hours, it’s still living in our heads rent-free — and probably will forever.

Ahead, check out of the rest of our favorite celebrity looks, including Juno Temple in Versace, Zendaya in Moschino, and more.

Ted Lasso star Juno Temple is getting in on the Versace platform heels trend with her full designer look at the show’s season two premiere.

Maitreyi Ramakrishnan promoted the newest season of her show Never Have I Ever in a bright yellow dress from Oscar de la Renta.

Teyana Taylor celebrated her “Sexiest Woman Alive” title from Maxim with a party in Los Angeles, wearing a mesh black dress over a two-piece.

Kali Uchis arrived at the 2021 MTV MIAW Awards in Mexico City wearing an all-leopard look with a large statement bow in the back.

Kesha attended the Pig premiere in Los Angeles wearing a black thong bodysuit underneath a sheer evening gown by Nikita Karizma and sandals by Le Silla.

Keeping up with her “Solar Power” aesthetic, Lorde wore a yellow dress from Kenzo with multicolored strappy heels and Mejuri jewelry to appear on the The Late Show with Stephen Colbert.