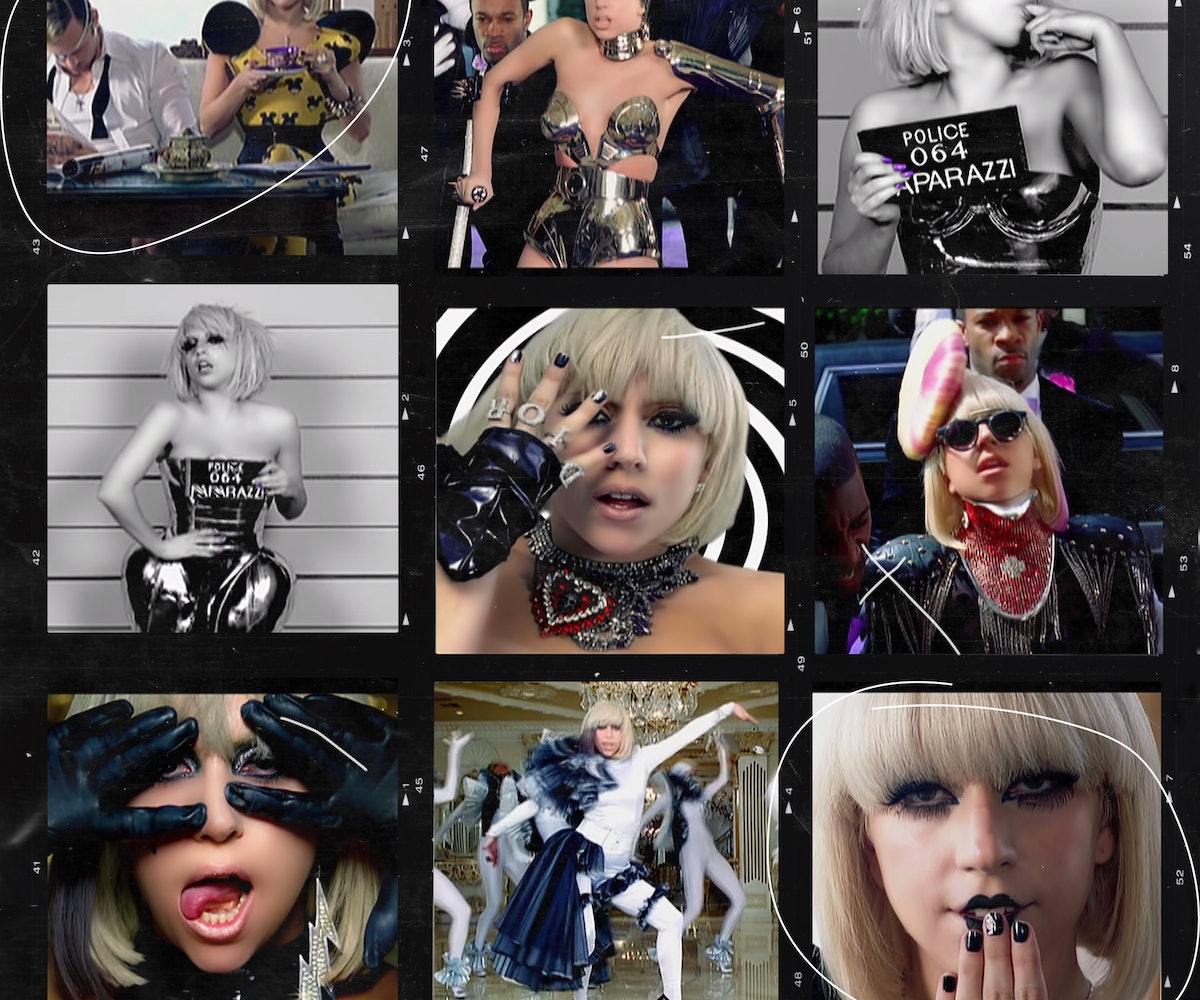 Lady Gaga's Chromatica era is a nod back to her early days as the scrappy, avant-garde burgeoning pop star. She's even gone back to one of her original stylists, Nicola Formichetti, for the new album, who back in the late aughts was part of her Haus of Gaga creative team and the man behind her infamous meat dress at the 2010 MTV Video Music Awards. It goes without saying what she's accomplished since the release of her first album in the summer of 2008, but it's worth noting anyway: She's won Grammys, a Golden Globe, has been nominated for an Oscar, pulled off dramatic fashion feats at the Met Gala and beyond, on top of becoming one of — if not the — biggest pop star of a generation.

With that, it's almost difficult to comprehend that there was a time when designers were hesitant to dress Lady Gaga. Or that her elaborate, theatrical music videos were once out of the ordinary, but such was the case for the seven-minute long video for "Paparazzi" in June 2009, starring a then-unknown Alexander Skarsgård.

The video's stylist and Gaga's friend B. Akerlund was behind the video's designer-heavy costumes. "Paparazzi" marked Akerlund's first time back at work since she gave birth to twins, and as she recalls, her "creativity was exploding by the time we were doing that video."

"I actually had to rewatch the 'Paparazzi' video [before this interview] because it's been so many years," says Akerlund with a laugh. "I think the time that it actually came out, that time in music and what artists were doing, and just her as an artist, it made a huge impact."

The video was a huge feat for Gaga at the time, who was then a relatively unknown singer to the world. She had released a few singles prior, including "Just Dance" and "Poker Face," but had yet to establish herself as a superstar who was here for the long haul. Akerlund faced the added challenge of securing Lady Gaga-worthy costumes and outfits by designers who had barely heard of her.

"When I did prep that video no one really knew who she was. So I had to convince designers to lend me clothes. It was funny because after that video, the whole world knew," says Akerlund. "I remember the Dolce & Gabbana corset at the end, they were like, 'No, we're not sure.' And I was like, 'Oh, come on. Just do me this one favor. I really need that corset.' And years later, that corset was showcased at the Louvre in Paris because she wore it."

Despite the pushback, Akerlund delivered, even securing rare pieces from Thierry Mugler's archives. Gaga ended up wearing the metallic robot one-piece from the French fashion designer's Spring 1991 collection with a set of bedazzled crutches after her character had been thrown off a balcony by her boyfriend.

"I remember the moment that box showed up, and it comes with a padlock and a key, and how exciting it was. At that time people hadn't really been digging into the archives," notes Akerlund. "I feel like that video was sort of a big turning point of bringing back Mugler archives."

Akerlund's encyclopedic knowledge of fashion was put to good use. Before any fittings, she had pieces in mind that she knew she wanted to use. It was just a matter of figuring out where they would work best.

"I knew right away what pieces were exciting to me. Everything from the Jeremy Scott pieces to, there's a designer called Boudicca Couture, which is the white piece she's dancing in, and these were some of my favorite designers and pieces that I had been looking at," she says. "I sort of just adapted all of it to work with the concept of the video and match the dancers. It's really a mishmash of fashion and costumes."

The release of "Paparazzi" and its accompanying video became a favorite among Gaga's Little Monster fanbase, who took to Tumblr and DeviantArt to create their own interpretations of the video's standout fashion moments. Even the looks that didn't make it into the final cut of the video are still seen by some fans as iconic Gaga fashion, particularly her on a polka-dot horse in a Jeremy Scott seashell swimsuit.

"It's funny because I sort of base the success of my project based on fan art and what people gravitate toward and find amusing. Everything from her on the horse in that iconic Jeremy Scott shell swimsuit to the Mugler robot," says Akerlund.

Akerlund, along with her husband Jonas, who directed the video, were even able to incorporate some of their of Swedish roots in the video. Their friend (Skarsgård), then a little-known actor co-starred as Gaga's murderous boyfriend, and the stylist assisted Gaga with her Swedish lines in the beginning of the video.

"At that time 11 years ago, we had people's attention more and we were more hungry for content. Where today, we're oversaturated with content. Like, 'Oh, I saw that. What's next?'" she says. "What's funny is, we used Alexander Skarsgård, who's a friend of ours, and at the time was not a big actor the way he is today. That was one of his first jobs in Hollywood. We even got Gaga to speak Swedish. I was trying to coach her on how to pronounce it correctly."

Though "Paparazzi" wasn't Gaga’s first music video, it was the first that established her as a budding fashion icon. Jeremy Scott was on set and assisted Akerlund during filming, even making a last-minute bodysuit from old film stock.

"The response was huge. I felt like it was the first time that the whole world was talking about it. Like, 'Oh who's this new artist? Have you seen this video?' I’ve worked with many, many big projects in my career, but I feel like the 'Paparazzi' video was a breaking point into fashion because I've always been somewhere between a stylist, a costume designer, and a fashion activist," says Akerlund. "It's always great to work on something that people can appreciate because my job comes with a lot of hard work and blood, sweat, and tears."