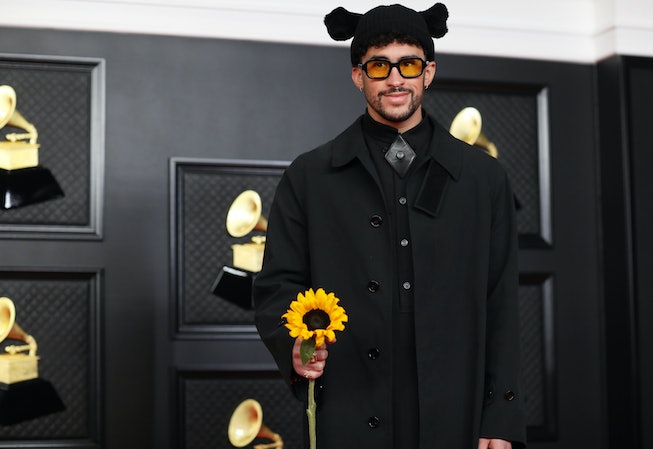 As one of the most anticipated red carpet appearances at the 2021 Grammys, Bad Bunny (née Benito Antonio Martínez Ocasio) did not disappoint. Dressed in a full Burberry by Riccardo Tisci look, Bonnie Clyde “Shy Guy” frames, Departamento boots in collaboration with Premiata, and accessorized with an endearing yellow sunflower, the Puerto Rican artist worked with his longtime stylist Storm Pablo to create his awards ceremony look.

“Riccardo Tisci is doing amazing things right now with Burberry,” Pablo tells NYLON. “I especially loved the beanie with ears, that made the outfit complete.”

The Grammy Awards show was a lot different than last year. As one of the first semi-virtual live events since the pandemic started, Pablo was tasked with dressing Bad Bunny at a slower pace. “I really enjoyed having more time to dig in and think through the creative process instead of rushing through important decisions,” he reflects.

But his work still came with its own unique set of challenges — especially when it came to styling Bad Bunny and fellow Latin trap star Jhay Cortez for their duet performance of “Dákiti.” “There was no live audience, which is a bummer in so many different ways,” adds Pablo. “My job then became to answer the question, ‘How can their style give people the same kind of feeling they would get if they were right here in person?’ Fortunately, Bad Bunny and Jhay Cortez are down for anything, so that makes finding the answer easy.”

Inspired by the performance’s stage set that resembled a nightclub of neon lights and mirrors, Pablo played with reflective details in Bad Bunny’s outfit. His all-silver look consisted of Comme des Garçons, a Dries Van Noten vest, and some sample pieces from an upcoming collection by Los Angeles streetwear brand 424.

“The reflectivity of the pieces lit him up really well with the stage lights, but the shine wasn’t too over the top. It was realistic enough that he could actually rock that in a nightclub,” says Pablo. “It’s also been a while since anyone has been to a nightclub, so providing that relatable and refreshing experience for the people watching was really important for us.”

Pablo also made sure Cortez’s look told the same fashion story, so he was outfitted with a Rick Owens silver puffer jacket, matching Dries Van Noten pants, and jewelry by Denise Tercero for the stylist’s own upcoming fashion line CNTRA.

With event venues slowly but surely opening up to the public and music festivals making a comeback by next year, Pablo knows Bad Bunny’s boundary-pushing style has to keep up with both his history-making career and his fans finally getting to enjoy his live performances again. So he’s making sure the artist’s outfits are bigger and better than ever before.

“Early on I would put Bad Bunny in a lot of streetwear and mix it with high-end brands. Today, we’ve also continued to evolve his style accordingly,” says Pablo. “Since his stages are getting bigger, his looks have got to get bigger, but we always want to keep his presentation authentic as well. We’re focused on that aspect of his looks probably now more than ever. I’m excited to watch it play out over time.”

Ahead, Pablo takes NYLON behind the scenes while prepping for Bad Bunny’s “Dákiti” performance with Jhay Cortez at the 2021 Grammys.