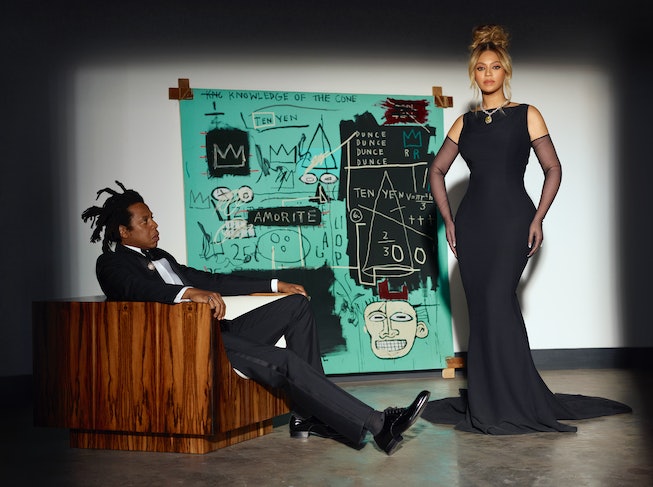 Beyoncé and JAY-Z for the Tiffany & Co. fall 2021 ABOUT LOVE campaign, shot by Mason Poole

Beyoncé and Jay-Z just landed their first-ever fashion campaign together with Tiffany & Co. — and it’s a good one.

The luxury jewelry brand revealed its “About Love” campaign on Monday, starring the power duo (and everyone's favorite couple). As a part of the brand’s new creative direction under LVMH, the series redefines and explores the facets of love from the Carters’ vision.

The campaign also features another star. For the first time ever, Beyoncé is adorned with the breathtaking Tiffany Diamond made up of 128.54 carats and 82 facets. The rare gemstone was unearthed in South Africa back in 1877 and has previously been worn by only three women: Mary Whitehouse, Audrey Hepburn, and Lady Gaga. Beyoncé is now the fourth woman and the first Black woman to do so. By her side, Jay-Z wears Jean Schlumberger’s iconic Bird on a Rock brooch, which was reconstructed as a pair of cuff links.

“Beyoncé and Jay-Z are the epitome of the modern love story,” said Alexandre Arnault, Executive Vice President of Product & Communications, in a press statement. “As a brand that has always stood for love, strength, and self-expression, we could not think of a more iconic couple that better represents Tiffany’s values. We are honored to have the Carters as a part of the Tiffany family.”

On top of a print campaign, a film by acclaimed director Emmanuel Adje, will feature Beyoncé’s rendition of “Moon River,” a classic song from the 1961 film Breakfast at Tiffany’s. In addition to nostalgic and dreamy visuals, the Carters also unveiled a never-before-seen 1982 art piece from Jean-Michel Basquiat’s Equals Pi. In an exclusive interview with WWD, Arnault also revealed that the painting will be on permanent display at Tiffany’s New York City’s flagship boutique on Fifth Avenue. “As you can see, there is zero Tiffany blue in the campaign other than the painting,” said Arnault. “It’s a way to modernize Tiffany blue.”

The “About Love” campaign series will launch in print on Sept. 2, with the accompanying film coming out on Sept. 15 on Tiffany & Co.’s website. See more photos, which Beyoncé revealed on her Instagram account, below.