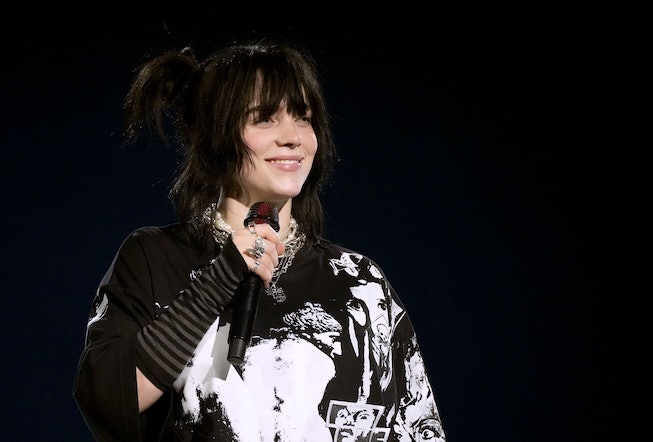 In the past couple of weeks, Billie Eilish has been booked and busy, embarking on her world tour for Happier Than Ever across Asia, including stops in Manila and Seoul to name a few. The 21-year-old followed up the end of her concerts with a travel diary and a compilation of her #OOTDs, which she shared on Instagram on Sunday, Aug 21.

In a series of new photos from the pop star while in Singapore, the singer was seen hanging out and about in the city, from bumper-car racing to taking a swim in the pool at night. But it seems that Eilish rocked her signature bold look even while off-duty, as she wore a gothcore-inspired outfit during her time there.

The songstress opted for head-to-toe black in her latest ‘fit pic, wearing a loose-fitted silk top styled with a thrifted slip skirt with and paired with a matching top as if it were an LBD. The summer heat didn’t stop her from wearing Moon Boots’ chunky Icon Low Boots in black, too, and she then completed her going-out look with a fitted Y2K hat and her favorite silver jewelry pieces.

“A lot can change in twenty seconds,” Eilish wrote in the caption, referencing the sudden downpour while taking photos outside in the street.

Ahead, check out the rest of our favorite celebrity looks, including Megan Thee Stallion as Sailor Moon, Dua Lipa’s Marc Jacobs birthday outfit, Lili Reinhart in Miu Miu, and more.

Kendall Jenner brought out her athleisurewear over the weekend. On Saturday, Aug. 20, the 818 Tequila mogul was captured off-duty in the Whole Foods parking garage wearing a long white linen skirt adorned with a slit at the leg. She wore her maxi skirt with a forest green ribbed tank top along with a pair of coveted white Adidas Sambas. Finally, Jenner accessorized with a cream-colored canvas tote bag and oval-shaped sunglasses.

Dua Lipa rang in her 27th birthday over the weekend in style, of course. This past Sunday, the Future Nostalgia singer posted her celebratory ‘fit to Instagram, opting for the tiny bedazzled bralette from Marc Jacobs. She then paired her outfit with a maxi cargo skirt and carried a white quilted pillow handbag also from the brand’s Fall 2022 collection.

It was only a matter of time before Doja Cat dropped a clothing line. Over the weekend, the musician and style star sported some pieces from her newly-released collection “It’s Giving,” including her “Yes” crop top dressed with a matching white statement thong, chunky silver jewelry, and “I Heart It’s Giving” trucker hat.

While in New York City for his “Love On” tour at Madison Square Garden, Harry Styles was photographed on a date night at Rubirosa with his partner Olivia Wilde. Styles wore a multicolored one-of-a-kind crochet lace button-down top by Bode, brown trousers, and white Vans sneakers.

On Thursday, Aug. 18, Hailey Bieber was sighted in Los Angeles wearing a cutout Blumarine blazer dress with thigh-high tights from its Fall 2022 collection. She then opted for chunky Alexander Wang loafers paired with Balenciaga sunglasses and ByFar’s mini Kiki Bag.

Actress and comedian Ego Nwodim attended the Los Angeles special screening of Spin Me Round in Beverly Hills wearing a patterned turquoise mini dress with a fringe hem and tan leather sandals.

Actress Debby Ryan was also seen in attendance at the Spin Me Round screening in Los Angeles rocking Lafayette 148’s Fall 2022 collection. She opted for a dark red double-breasted blazer layered over a pinstripe top and blue trousers. She completed her look with loafers and a new curly mullet.

On Tuesday, Aug. 16, Lili Reinhart arrived at the premiere of her Netflix film Look Both Ways wearing a dazzling green Miu Miu dress and black pumps.

Cynthia Erivo arrived at the Los Angeles premiere of Amazon Prime’s The Lord of The Rings: The Rings of Power donning a silk golden top and a long gray skirt by Rick Owens, accessorized with a pearl-shaped Simone Rocha bag.