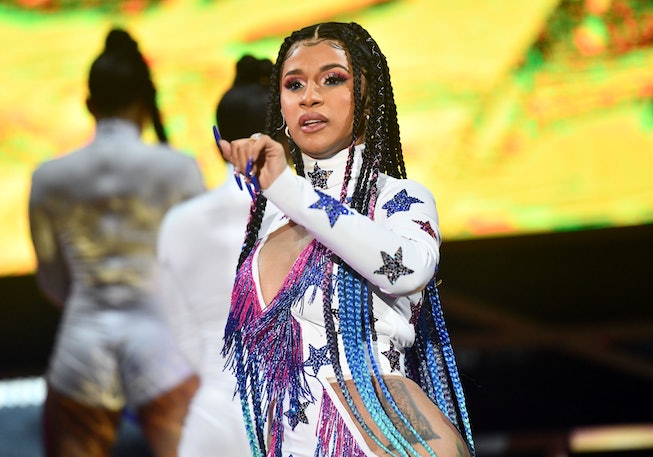 Cardi B's new sneaker launch with Reebok is being overshadowed by her latest magazine cover. The rapper dressed as the Hindu goddess Durga for her cover of Footwear News, posing alongside her upcoming Club C shoe. Many were quick to point out how the cover was offensive to the Hindu religion, including that shoes aren't even allowed in Hindu temples.

"People are saying Cardi B is paying homage to our hindu goddess Durga," one Twitter user wrote. "So as a Hindu I want to say that: 1-Wearing a shoe in a temple is prohibited 2-Durga maa is not to be used as an aesthetic 3-Durga maa is NEVER depicted bare bodied 4-THIS. IS. NOT. HOMAGE. IT'S. DISRESPECT."

Cardi has spoken out on the cover, apologizing in a video she posted on her Instagram Stories.

"When I did the Reebok shoot, the creatives were telling me that I was going to represent a goddess that represents strength, femininity, and liberation, and that's something that I love and that I'm all about and I thought that it was dope," she said. "But if people think I'm offending their culture or their religion, I want to say I'm sorry. That was not my intent. I do not like disrespecting nobody's religion."

Cardi's collaboration with Reebok is still scheduled to drop on Friday.