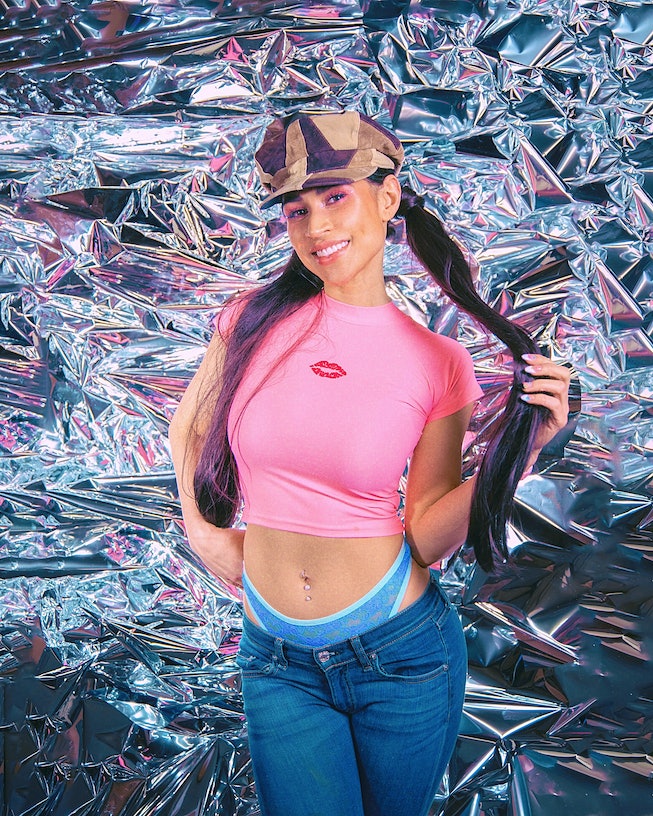 It’s been more than two decades since Cassie Steele played Manny Santos in Degrassi: The Next Generation and coincidentally following news of a Degrassi reboot set to arrive soon, the actress just so happened to release her very own line of thongs, paying homage to her famed OG character.

For the launch, the actress collaborated with designer Rachael Finley’s Hot Lava, a slow fashion women’s streetwear brand based in Los Angeles. Made with landfill-bound deadstock fabric, the new release features four mesh styles, including three underwear silhouettes in lace and vibrant patterns, like a floral “Mrs. Manning” print and a black-and-white dotted “Cuckoo Bananas” style trimmed with an electric green hem. There is also a blue lace bra dubbed the “Hot Bralette,” which is bedazzled with orange rhinestones that resemble flames, along with a matching underwear style embellished with the word “HOT” on the backside.

The collaboration campaign stars Steele rocking her iconic lace thong paired with low-rise denim jeans and a pink baby tee, finished off with a patchwork dread cap similar to what her character often wore throughout the series. “I myself love a good thong,” Steele said in an interview with NYLON earlier this year. “Hate those pants lines. You know what I mean?”

In celebration of her partnership with Steele, Finley posted a new campaign video for the release, writing, “I’ve been waiting to ask Cassie (@cassandrasteele) to do this for 4 years, I just wanted it to be right so I waited until I was ready. She said yes in seconds, I couldn’t believe it. For this first collection, we wanted to make an updated homage to a very culturally important piece of media for our generation, the thong moment and what it means to be a multidimensional woman who wants to be hot. We couldn’t launch thongs with Cassie Steele without doing it.”

Sizes for the launch range from XS through 4XL, with prices from $18 to $24. Hot Lava has plans to drop more pieces later this fall, and until then, you can shop Cassie Steele’s new Manny-inspired thong drop on hotlava.com.