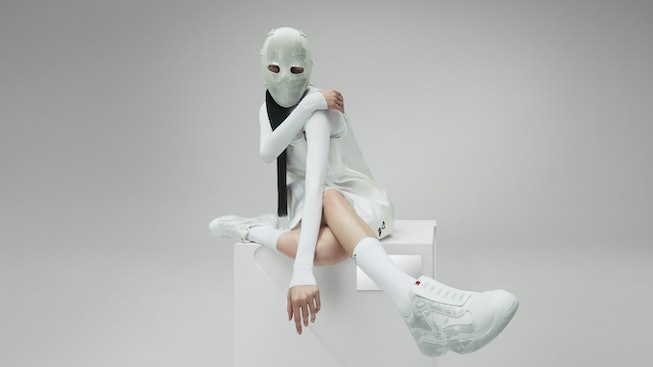 The TikTok-approved DIY trend has been on the rise for quite some time, and it seems that Prada has caught onto it, too. Following its latest campaign starring Euphoria star Hunter Schafer, the Italian fashion house announced a new collaboration with artist Cassius Hirst, also known as Cass (and the son of contemporary artist Damien Hirst), to apply his own creative take on its ‘90s-era America’s Cup sneaker.

In partnership with Prada Linea Rossa, the 22-year-old is launching a total of four styles to reflect the evolution of the sneaker’s silhouette. Inspired by the life of a sound, the styles are titled “ATT4CK,” “D3CAY,” “SUST4IN,” and “REL3ASE,” which reflect their unique designs made from neon spray paint, distressed leather, and more. Each sneaker also comes with a “CASS” signature on the front, along with a co-branded Prada box and an image scan of the brain — Hirst’s own logo.

Hirst has been painting sneakers as his go-to canvas since he was 14 years old. Over the years, Cass’ work has grown a celebrity following with purchases from the likes of A$AP Rocky, Playboi Carti, Offset, Rihanna, and the late Virgil Abloh.

The opportunity to collab with a major brand like Prada came about after working on a pair of Air Force 1s. “While I was painting Air Force 1s, I would end up with this result that I really liked and was a bit far out to sell as a custom shoe, but I thought it looked awesome. There was masking tape on the shoe and all these vinyl stickers and stuff,” Cass tells NYLON. “I sent a photo to my dad, he sent a photo to Miuccia [Prada] and she thought it looked amazing and she wanted to do something. That was like three years ago, so this has been a slow project in the works.” In Hirst’s own words, the collection is full of details and colors, but there’s a simplicity to it, too.

The Cass & Prada collection will be sold in limited quantities of 3,000 pairs globally through a selection of Prada stores and online at Prada.com. While we wait to get our hands on a pair of the artsy shoes, read more Hirst, his creative process, fashion nostalgia, and more, below.

Were you familiar with the America’s Cup sneaker at all? What were some of your first memories or impressions of it?

I don’t really think I had many memories. The only memories would be out of the corner of my eye because growing up, it wasn’t really a shoe I would wear since I was into wearing more skater shoes. It’s crazy because the shoe is older than me but I’ve had my eye on it for the past five or so years.

You're known for custom painting AF1s exclusively. What was it like working with a new sneaker silhouette?

It was a lot of fun because as I grew a bit older, I realized the Air Force 1s had issues and it can be difficult on many points, especially when it came to painting the soles. I’d always have to mask it off with tape and always having it stay white at the bottom was kind of limiting. For Prada, it was amazing to have the opportunity to just cover the whole thing, seeing the pattern and learning about the physical shape of the shoe. I also enjoyed finding the balance between colors, such as finding the right tone of pink. Those kinds of things were the most satisfying.

Tell us about your inspiration and creative process behind reinterpreting the sneaker. Any details or designs that you’re particularly proud of?

I’d have to say the D3CAY because it was a technique that, while I was painting and experimenting with the Air Force 1s, I never really got good results out of it. With this project, it just kind of appeared in front of me and I began to just create loads of layers and I was like, ‘Oh, this is the exact same thing I was doing with the Air Forces, except this time, it’s working and I can do it in any color.’

The America’a Cup sneaker comes from the late ‘90s, and fashion nostalgia is huge right now. Are there any trends from that era that you’re into right now?

I’m not huge into nostalgia, but I would say maybe those heavy metal kids of the 2000s — they always had a pretty hilarious look. I think that was good. I’d probably say that that’s kind of the main one that would come to mind, but I don’t think I’d go for it now, like the big jeans and the terrible red hair. I normally just go for good trousers and I want to find a nice T-shirt. As for me, it’s always more about the individual pieces because I feel like if I’ve got good trousers and a nice jacket that I love to wear, for instance, then it’s easy since then you can kind of create endless variations. Whereas if you’re into a certain trend, then you could change one piece and someone could say that you’re not part of the trend anymore.