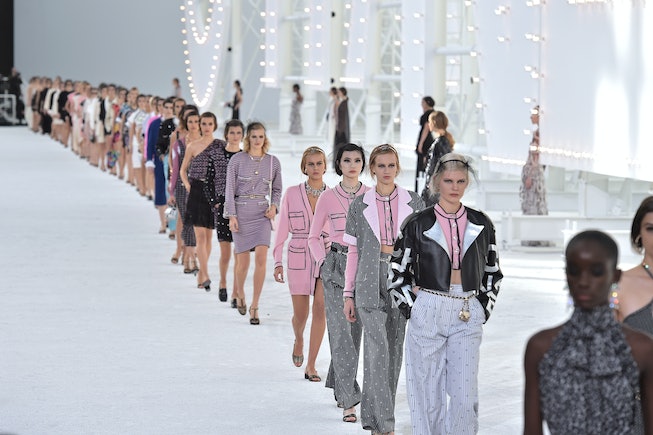 Chanel is back in the podcast business with "Chanel Connects," a new series that has celebrity guests and artists reflect on 2020 and how that will shape the future of culture in 2021. This is the second podcast series from the French fashion house, following the 2017 release of "3.55" hosted by journalist Daphné Hézard.

"Chanel Connects" doesn't have a host — instead, each episode features a roundtable of guests, including Pharrell Williams, who speaks with artist and stage designer Es Devlin about escapism and art as activism. Keira Knightley chats with The Farewell filmmaker Lulu Wang about the power of film and more representation of women, and Tilda Swinton and Edward Enninful discuss celebrity culture.

Chanel is the latest fashion brand to turn to direct streaming platforms over the past year, though most of these pivots have to do with music. Dior released its runway show soundtracks on Spotify at the end of 2020, while Mary-Kate and Ashley Olsen have been releasing monthly playlists on Spotify for their brand The Row. (They recently dropped their music picks for January.) Plus, Balenciaga's Demna Gvasalia also kicked off their Apple Music partnership with a 100-song-long playlist, and Fenty released a series of playlists on Apple Music created by its friends and collaborators, including designer Jahleel Weaver, model Imaan Hammam, and Steve Lacy.

"Chanel Connects" is available to stream on Chanel's website, Spotify, and Apple Podcasts. Listen to a few of the episodes, below.