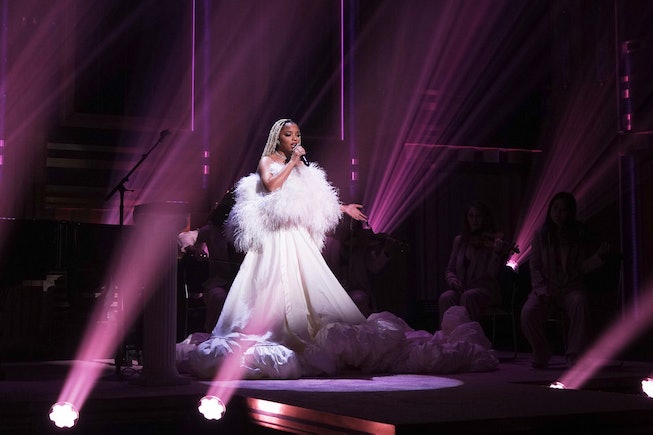 On Tuesday, Oct. 12, Chlöe — also known as Chloe Bailey in the sister duo Chloe x Halle — starred as the musical guest on the most recent episode of The Tonight Show Starring Jimmy Fallon. The solo singer performed her new hit single “Have Mercy” on stage, and as expected, she not only dominated the late-night show with her powerful vocals but her outfit (or two), as well.

While starting off with “the ‘Big Booty’ Sonata in C-sharp minor,” as noted at the beginning of her performance, Chlöe stunned in a strapless, white-feathered gown from Bahraini fashion brand Monsoori, which also had an elaborate, bubble-draped skirt. While the audience applauded, Chlöe then switched to a more upbeat version of the song and transformed into the ultimate baddie, ripping off the flowy train and revealing a feather mini dress, which she paired with fishnet stockings embellished with crystals and platform metallic heels. She also glammed up the ensemble even further with diamond earrings and a blinged-out choker.

In a recent Instagram post, the “Have Mercy” singer uploaded the performance from the show and wrote, “thanks for having me, i had so much fun up there performing the big booty sonata in c# minor 🤣🎻🎹🍑.”

Check out the full performance of Chlöe’s “Have Mercy,” including her on-stage outfit change, on The Tonight Show Starring Jimmy Fallow, below.