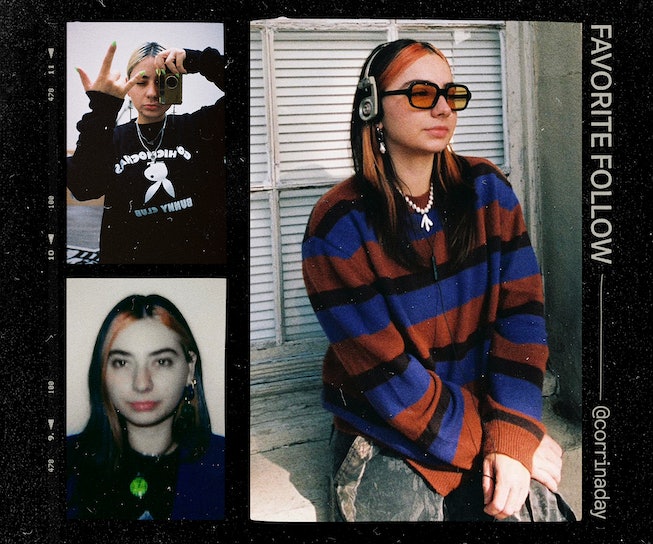 With the rise of influencer culture, there’s a lot of pressure to overshare on social media. Whether that’s posting daily selfies or photo dumps of your recent whereabouts, there’s almost an obligation to reveal every part of yourself for the sake of “online authenticity,” even if that means exposing yourself to millions of people. But for Corrina Day, she’s doing so in a different way and it’s through her work. Since getting her start in photography with a beginner’s film course at Pace University, the cinema major soon transformed into a full-time freelance photographer and creative director, with her work being featured in campaigns for 10011 Magazine, fashion label Saint Sintra, and, most recently, cult-eyewear brand Lexxola’s “Global City Tour” launch.

For Lexxola, Day was tasked with personifying New York and Los Angeles through imagery, models, and the brand’s signature sunglasses. “It’s just like any other major city when you break it down,” says Day on photographing the essence of L.A. “I wanted to capture the model doing what she would do in her normal life, and I think that’s a big aspect of my photography in general is that I like the more like ‘realistic lifestyle concept,’ even if I'm doing a dramatic version of that, I just like playing with realism.”

Day, who splits her time between L.A. and NYC, has proven to be the ultimate cool-girl behind the lens. Known for her early-aughts aesthetic and experimenting with angles, her photos feel nostalgic yet relatable, with a very organic and playful twist. Her imagery has now become a fan favorite online, as well, since she’s able to capture raw emotions and personalities, along with the true essence of a landscape no matter where she is. Plus, with nearly 25,000 followers and counting on TikTok, Day is slowly but surely inviting viewers into her world, from giving behind-the-scenes looks into her photoshoots to offering editing tutorials.

In fact, Day might be ready to show more of herself online, but it’ll take some time, she says. “Photography is a huge reason why I find the courage to share my own work on social media because I wouldn’t have jobs if it wasn't for social media, so I obviously love it in that capacity because it put me where I am and made it so I could turn something I love so much into a job,” Day tells NYLON. “I definitely find it hard to put myself on there, and it’s something I’m trying to get better about. I like to share on my [Instagram] Stories, but I literally can’t get myself to post a photo of myself on my feed. But hopefully, one day, I will feel good about doing so.”

On Working With Film Vs. Digital Photography

“Film is how I truly learned how to do photography and my first real photography course I took my freshman year of college was Film 101. I actually learned genuine techniques with photography, like how the shutter works, how the aperture works, and all the technical parts of it. I learned how to use a dark room and develop my own work, and I fell in love with the process so, therefore, I feel like I fell in love with the medium itself.

Film is more hands-on than digital, and I like the suspense of taking a photo and having to do all the work myself. This sounds so cheesy when I say it, but I feel like the way I see things with my eyes and visualize them in my brain is the way images turn out with film, whereas with digital, there’s a bit of coldness and a part of that has to do with the fact that I can’t nitpick film the way I can with digital. I can shoot 100 digital images and be unsatisfied but it takes literally one film image for me to feel like I captured something truly authentic and special to that moment. All of the imperfections end up being what I love the most about the work.”

On Her Favorite Film Camera

“I alternate with different cameras for different reasons, but I would say my trusty camera is my Canon EOS 1V. It’s the last film camera Canon ever made before it went digital, and it’s super unique because it has both digital equipment and film equipment inside of it but it’s still a film camera. I also personally love it because it looks like a digital camera and it trips out my clients that are a little hesitant to let me shoot on film because of that. But if I’m going out and want to have a fun camera, I always recommend the Olympus Infinity. It’s like a little point-and-shoot you can shoot automatic all night and the photos will be perfect forever. Like if you’re going out, this is the perfect camera to have, I swear.”

On Her Relationship with Social Media

“Like all people, I have a ‘love-hate relationship’ with social media. When it comes to my own account, I definitely do it like a portfolio. I’m trying to get better about putting myself on my own account because I know that’s a huge reason people want to invest in you if they know you and you’ve shared your personality, which I find so hard for me to do. Not because I think it’s cringy or weird — I actually really admire people that can easily share themselves — but I don’t know why when it comes to me, I find it so hard to share my own stuff.

Photography is a huge reason why I find the courage to share my own work on social media because it's a huge source of it. I wouldn’t have jobs if it wasn't for social media, so I obviously love it in that capacity because it put me where I am and made it so I could turn something I love so much into a job. I definitely find it hard to put myself on there, and it’s something I’m trying to get better about. I like to share on my [Instagram] Stories, but I literally can’t get myself to post a photo of myself on my feed. But hopefully, one day, I will feel good about doing so.”

On Sharing Yourself Online

“Remember that, ultimately, people are full of love even if there’s as much hatred as it seems out there. When you breed a community of people that care about what you do, they’re going to also care about you. They’re not only going to be happy when they see your work, but they actually will be more invested in what you have when they know you and have a face to the name. Even though it feels scary, I feel like in the moment, you’ll receive so much more positivity when you put yourself out there authentically. A big part of being on social media is obviously opening up to the internet, which feels weird and scary, but it’s a huge reason people can do the things they love. I’ve seen so many people be able to make a career out of these weird little niches of things they love so much because they were willing to put themselves out there, and at the end of the day, people genuinely are more welcoming than it seems. People want to learn about you, and people want to see what you have to say, so you just have to see it that way.”

On Her Social Media Guilty Pleasures

“My guilty pleasure is cooking videos on Tiktok and on Reels. I will literally scroll through my feed watching cooking and Mukbang videos for hours, like it is literally how I wind down from work. I am a huge cook and when I’m older, I want to open my own restaurant because I’m a huge foodie. My dad actually owns a restaurant, and I grew up in a restaurant environment. My mom is also a great chef and I just grew up with food being so important to me, so I can literally watch people cook and eat for hours. I also like those ridiculous organization videos where they have every gadget you’ve ever needed for a home and you’re like ‘Who in the world even owns these things?’ But I’ll watch them forever.”