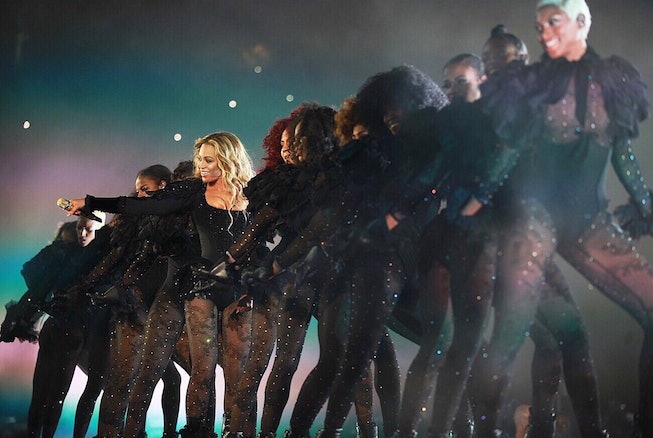 Destiney Bleu is back and better than ever, and she has Beyoncé, Abraham-Hicks, and social media to thank.

The fashion designer synonymous with crystal-covered everything has been going through a rough patch with her brand d.bleu.dazzled over the past couple of years, waging a private war against knockoffs, the Kardashians, and her own overwhelming self-doubt. But thanks to a pandemic and citywide lockdown, Bleu has, ironically, finally managed to rediscover her confidence, rehabbed her business, and is hitting her Swarovski-encrusted stride all over again.

Bleu confesses that, from late 2017 until March of this year, her brand was going through a phase "where everything went to sh*t." She had expanded her burgeoning label too fast, taking on too much overhead, which forced her to learn tough retail lessons in real time. On top of that, "people were knocking my stuff off, or just getting a new idea about what they thought things should cost [because of fast fashion], and sales plummeted. I was taking out loans, which I hadn’t done in five or six years, and having to do that threw me mentally into a really negative space," she tells NYLON.

Having temporarily lost her way, Bleu turned back to the self-help books that had guided her in the past, like The Law of Attraction and A Happy Pocket Full of Money. "I felt like my ego was taking over. But the real people who have followed me forever, the celebrities, and the people who make decisions as to what is quality, they knew what was up," she says. "So I just tried to tap back into that and stop worrying about needing to prove myself or compete with fast fashion. I started doing real mental work with the goal of remembering why I started. 'What did you want people to feel when they wore your stuff?' Get back to that. Stop competing and start creating."

Along with this inner work, Bleu also started to pivot her brand's offerings to include more simple, crystallized type on sweats and athleisure. "My stuff is so great, it's just intense and gets a lot of attention," she explains of her iconic catsuits, lingerie, and tights. "I wanted to still be able to do that, without doing all that."

"I've always wanted to be an American Apparel meets Build-A-Bear where you have trusted bases, but you can make it your own so you feel like it's just for you," she adds. The purchase of a new machine that prints crystals onto fabric allowed her to become just that, so, "if something starts trending today, I can put it on a shirt. I can be reactive without really having to change my whole business model."

Momentum started to build around these new, more affordable pieces as the pandemic hit and put the fashion industry at a standstill. "I was forced to find some structure. We're a nonessential business so I even had to monitor when I was coming to the office during the day," Bleu says. "I'm thankful because with quarantine it pushed me back into being inspired and starting to love what I do again. ... Working with fewer celebrities helped me really focus on my sh*t; I feel less forced without so many deadlines on my back."

But it also meant her finances were tighter than ever, which prompted her to take a risk and ask for some help from her fans. In mid-March, Bleu tweeted asking if everyone could send her $1. "I got a few thousand dollars in 24 hours, it was enough to do payroll and still have enough to cover all my utilities," she says. "Sometimes people don't do stuff because they don't think that they can help. They don't realize that every dollar can help."

That simple request also got the attention of Pyer Moss' Kerby Jean-Raymond, who, the day before, had posted about giving away grants to small, minority, and women-owned creative businesses. So when he saw Bleu's tweet, the designer sent her a DM urging her to apply. "With him tweeting me, I was like, 'OK, wow, he's that guy.' So I hit [his team], and within five minutes they replied back to me, like, 'Great, can you send your banking information," she says.

That grant combined with sales from her "Social Distance Club" and Black Lives Matter collections, as well as being featured on numerous lists of Black designers to support, led to her brand doing more sales last month than all of Q4 of 2019 — typically her busiest time of the year. "It's just been outrageous," she says. "I was like, 'You're really supposed to do this. People love what you do. Don't give up on yourself because people don't want you to.'"

And even with all of those exciting developments, that cash influx was only just the beginning of a whole new chapter for d.bleu.dazzled. In the midst of her financial and legal struggles last summer, she was simultaneously working on numerous pieces for Beyoncé's new visual album, Black Is King.

"We did so much work for her, she kept me in business. I was grateful for the money because it kept me alive. I'm grateful because they're not doing me a favor, they’re coming to me because they truly believe that I can give them what they want," explains Bleu. This isn't the first time she's created looks for the mega pop star, but it is one of the first times her work will be prominently featured. While Bleu can't share much about her selected designs, she does mention Beyoncé's song "Find Your Way Back," a title Bleu feels is apt for her own professional journey.

On June 28, Beyoncé released the trailer. "I realized, this giant 3-yard thing of fabric that we'd crystallized, she's wrapped in it over a catsuit that we made," recalls Bleu. "It feels like it might finally be my time, and with what's happening with my business and my logistics, I feel ready. I feel like there are certain designs now that you're going to see and know that they're mine and that feels so good. I feel like I've finally established myself."

"I feel like I’m getting back to my roots, but I've also rebranded in a way where the things I’m making are still really true to me," she adds, bringing up her background in dancing and how wearing costumes as clothing is a consistent source of inspiration. "It's all come full circle. My confidence is back and that's a huge part of it. Our stuff has been on the cover of Vogue, I've done hundreds of tours at this point, I've lost track of the kind of placement we've had. But I've had it, I lost it all, and I'm getting it back again because it's truly what I'm supposed to do."

While she still has major lawsuits to contend with, including a high-profile case against Khloé Kardashian and her brand Good American, Bleu is looking to the future and hoping she can help set a new precedent for designers' rights and how allegations of knockoffs are handled. "I'm suing because I feel like there should be different laws in place," she says. "It's part of my mission, I feel, to bring this stuff to light. This sh*t needs to stop."

In terms of what's next for her brand, Bleu says she eventually whats to expand into shoes and home goods, but right now she's looking to collaborate with major brands that can help her big ideas come to fruition. "I'm hoping Nike will come holler at me or Louboutin," she says. It’s time to "give some original creatives an opportunity, and not because people are watching you. Make it organic."

"Sh*t, if I can do this well during this crazy time, I'm supposed to make it," she enthuses. "The answers are always there for you; you can really shift yourself up out of anything. Life should be happy! There should be joy in it. I feel so grateful that I've found my joy and it's coming out through my work. I couldn't be more happy about it."

Editor's Note: This story has been updated from its original version to reflect that Black Is King was not pushed back, as previously mentioned, but had evolved as a project over time.