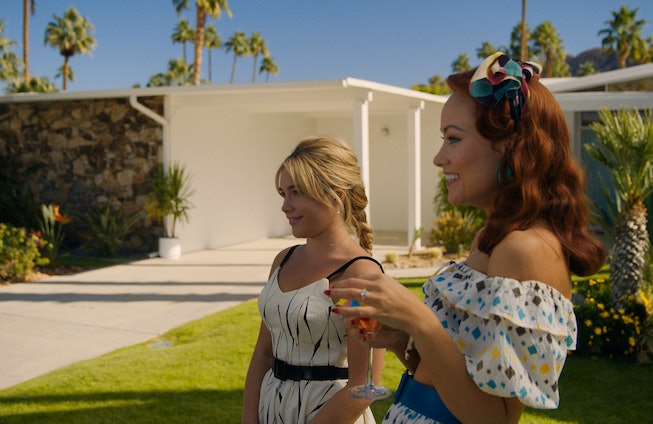 In Don’t Worry Darling, which hits theaters on Friday, Florence Pugh and Harry Styles play Alice and Jack — a picture-perfect, totally horny and in love husband and wife living in a suburban utopia in the California desert in the 1950s. Every day, Jack and the men of the neighborhood leave to work for the mysterious Victory Project, led by Frank (Chris Pine). Meanwhile, Alice and the other wives are asked to stay home “where it’s safe,” so they spend their days doing chores, shopping endlessly (Victory foots the bill), and lounging by the community pool, but somehow always ready with dinner and a drink as soon as their men clock out. In other words, it’s a patriarchal paradise. But Alice starts seeing weird things, causing her to question what’s really going on.

Everyone is always immaculately dressed — the women in colorful swing dresses and heels, and the men in tailored suits and bowling shirts. The highly stylized costumes both amplify the seemingly perfect world of Victory and juxtapose the tension that begins to unfold. Arianne Phillips, the film’s costume designer known for her work on Once Upon a Time in Hollywood, Walk the Line, and Girl Interrupted, says that one of the things she loves about costume design is the ability to be part of the character development process. “With Olivia [Wilde], we spent a lot of time talking about these characters, what they represent, what their motivations are, and what the overall character arc is from beginning to end,” she explains. “The clothes are not isolated, they're connected to the character, and help underscore the tone and the mood.”

In other interviews, Wilde has said that there are a lot of Easter eggs in the film, and Phillips's costumes play a huge role in that. “It's the kind of movie you’ll want to see twice once you watch it and things are revealed. There's a few twists,” says Phillips. Because the movie isn’t based on real-life events, historical accuracy wasn’t too much of a concern, so there’s a reason why you may notice little things out of place — like a woman walking around a pool topless and in a 60’s-style, low cut bikini bottom. “I took some pretty broad license that all becomes revealed later in the film,” notes Phillips.

Ahead, Phillips shares eight costume details (and Easter eggs) in Don’t Worry Darling that might even inspire you to explore a 1950s fashion aesthetic.

The Victory Men were Inspired by The Rat Pack

As with all costume design, research is always the first step, and both Phillips and Wilde turned to art and reportage photography from the era. (Slim Aarons’s “Poolside Gossip” was a major inspiration for the look and feel of the movie.) “This film was really about a lot of mid-century design in so many ways, so anything's game, from art to movies, and we really embraced this early ‘60s Rat Pack era,” says Phillips, speaking of the friend group that consisted of Frank Sinatra, Dean Martin, Sammy Davis Jr. and other famous entertainers. “It was like Vegas during the ‘60s and that kind of post-war, optimistic time when it was a ‘guys were guys, girls were girls’ kind of thing.”

Styles may already be a major pop star and fashion icon, but Phillips says that when he came into the fitting room, “he was there as an actor,” like everyone else. “Being aware of who Harry is, in terms of an artist, I really appreciate how open he is, at least with the way he dresses and the way he expresses himself. So, I was looking forward to working with him because I'm always hopeful that an actor is going to be open, not only to my ideas, but the director's ideas. And he was on board,” says Phillips. “He was really generous with his time, he was really curious, and he loved to talk about the character.” Phillips says that for some actors, costumes are not a major part of their process, while it is for others. “Harry just had an openness to him in general, and he's a people person. He really liked having the conversation around who the character was, and it was just a joy to work with him,” she recalls.

The Beauty Muse for Florence Pugh’s Character Was Brigitte Bardot

When it comes to Alice’s look, Phillips says Wilde really leaned into an early Brigitte Bardot direction for her hair and makeup. While she didn’t look towards any specific 1950s-era movie stars for Alice’s overall clothing choices, she said for the scene in which Alice goes out looking for a plane that crashed while wearing a black dress, she had Federico Fellini movies on the brain. “I thought a lot about Fellini films from the early 50s, and a lot of Italian cinema. I always love that kind of look of black in a desolate desert,” she says.

Phillips Custom-Made Clothing for Styles and the Actors, Using a Lot of Vintage Fabrics

“I usually like to approach my principal characters by designing specific things for them, and then I'll supplement with a vintage piece here and there so that it has some authenticity,” says Phillips. A vintage fashion connoisseur, Phillips makes an effort to source vintage fabrics for the movies she works on, especially because it is nearly impossible to recreate textures from past eras. For Styles’s suits, she tapped Western Costumes’ Jack Kasbarian to build them, and also sourced vintage shirts and cardigans. She also found shoes for Styles from a vintage seller in LA called Vintage on Hollywood. A few of Alice and Bunny’s dresses were also constructed from vintage fabric, which she says “really helped give the feel of the period.”

If you compare Bunny’s style to the rest of the Victory women, you’ll notice her outfits are a little sassier, with off-the-shoulder crop tops and a leopard print bikini, a la Bettie Page. “For Bunny, I looked at a lot of pinup girls,” says Phillips. “I purposely designed Bunny a little bit more 50s because she loves being at Victory and really embraced the lifestyle.”

Alice’s Growing Independence is Represented in Her Outfits

Every morning, Alice and the rest of the women kiss their husbands goodbye as they all leave their respective houses all at the same time. Alice is pantless, only wearing her husband’s white button-down and cha-cha heels, whereas the rest of the women are in their usual dress garb. It’s a strange choice for a woman to wear in public, considering that the era was pretty conservative in terms of both sexuality and dress (and hemlines only began to rise in the 1960s). But the look may have multiple meanings. “It's reflective of how she is — first of all, she and Jack are incredibly in love,” says Phillips. “She’s also wrestling with what Victory is about, she knows something's off, and she's independent in a culture where it's really about pleasing the husbands and the male gaze. She’s grappling with fitting in and being herself, and there’s this overall theme of the movie of control and patriarchy. Alice definitely speaks out, she's confrontational with Frank and constantly questioning things.” Phillips says Alice’s morning outfit is an example of how she has her “own way of doing things.”

In one scene (which is in the trailer), Alice is wearing a white dress that's covered in blood. If you read our interview with Jennifer’s Body costume designer Katia Stano, you know that a white outfit usually means gore is about to happen. “Every time I see a movie and I see white, I often think there’s going to be blood,” explains Phillips. “I have to say, I haven't ever done that before. This is the first time, and Olivia really loved the graphic.” Usually, she says, when there is some kind of violence on screen, they’ll minimize it more in the face or the hands so that viewers aren't stuck watching a lot of scenes with someone with blood on them. “This was quite the opposite in terms of the direction that Olivia wanted,” she notes. “The dress was going to initially be yellow, but if you have red blood on a yellow dress, it becomes kind of muddy looking. And I thought, well, let's just lean into it like a beautiful watercolor flower.” Alice is also wearing a white dress in this monumental scene, which is similar to an earlier scene where she goes to Victory’s headquarters in a black dress. “I liked the neutrality of the white and the black when she goes to Victory, as opposed to all the colorful and printed dresses she wears in the rest of the film,” says Phillips.

Phillips used color to convey that some things in Victory aren’t what they seem. For example, Bunny wears a cobalt blue dress while Alice wears a bright fuchsia one — two colors that weren’t necessarily common in this time period. “When I made those pieces, I wanted a heightened reality,” says Phillips. However, she’s quick to note that there are plenty of other Easter eggs that she won’t reveal, so to find them, we all might have to do that second watch after all.