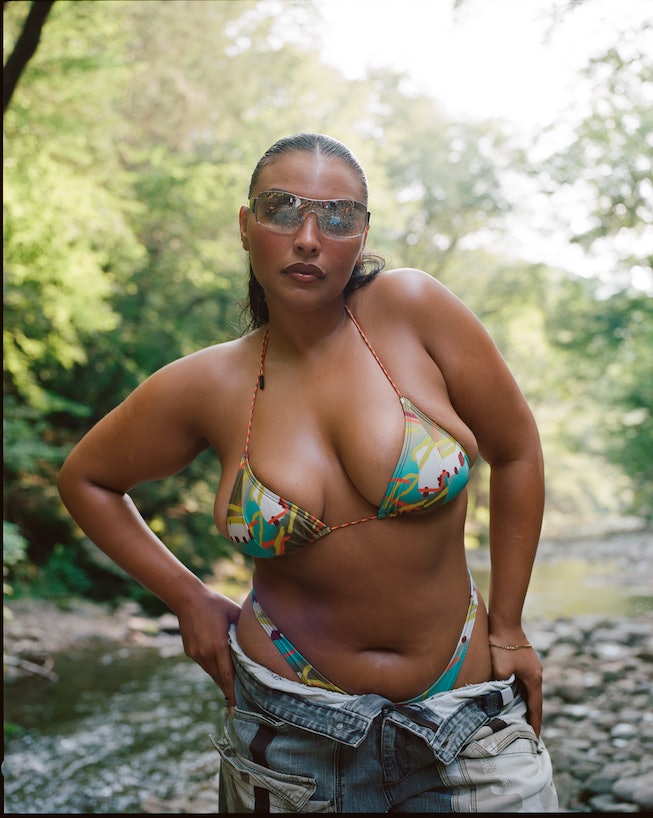 It feels like swimwear is everywhere these days, from actors and tennis stars designing their own collections to brands lingerie and athleticwear brands expanding into the summer-friendly category. But among a sea of bikinis and one-pieces, not many styles or brands really stand out these days. In fact, most of them all look exactly the same, no matter how differently you show it off on Instagram.

Dos Swim, a New York-based indie brand founded by friends Paula Hess and Shay Johnson in 2019, offers unique swimwear that you won’t want to get rid of after a summer. The two source deadstock fabrics to create one-of-a-kind printed swim pieces inspired by their travels, and they pay close attention to details, whether that’s adding beading to a design or producing a custom trim.

“It's very time consuming and also very expensive to develop all these things but it’s really important to us, instead of mass-producing something and being out there to just make money,” Hess tells NYLON.

Ultimately, Hess and Johnson, who both work in fashion and creative production, respectively, wanted to create a swim line that their friends would love.

“We’re just doing something that the New York Downtown girls relate to,” says Hess. “We started with our friends wearing it and then girls would see them and be like, ‘Oh wait, what is that brand?’”

One of those friends is Paloma Elsesser, a model and quintessential cool girl, who promoted the brand at the end of 2020 on social media, posting a photo of herself in a bikini with the all-caps caption, “Just wear the bathing suit.” Nearly eight months later, Elsesser now has her own collection with Dos Swim, including swimsuits and cover-ups that go up to size 3X.

“Paloma is one of our good friends and during the pandemic, we started talking about wanting to do a collection together for the summer,” says Johnson. “The inspiration behind the collaboration is friendship.”

Not only did Elsesser, Hess, and Johnson team up to design the collection, but they turned to their social circles for more creative input. Nail artist Madeline Poole helped create three of the prints, including a camo-like motif with Paloma and the brand’s names hidden within it. Plus, photographer Mayan Toledano and stylist Zara Mirkin were behind the launch’s campaign shoot, which took place at a lake in upstate New York.

It’s not often that two friends can successfully launch a brand together, but over the past two years, Hess and Johnson have made it work. “We always look at [Dos Swim] from a friendship perspective more than as a company. We always call each other Yin and Yang because it's always a balance between us,” says Hess. “Shay’s job is working with people constantly, like meetings and organizing things, while I work by myself getting things done. We would always joke because I can sit and do the same thing over and over again for an hour, and she’s like, ‘I can’t do this.’”

While Dos Swim is still trying to figure out what Hess calls the “algorithm of swimwear,” the duo notice that when they put out what they truly feel strong about, it’s usually what ends up being the best choice. After Elsesser’s collaboration, they plan to release Dos Swim’s next collection later this year.

“We'll see what happens,” says Johnson. “We're like turtles in the race and we take it day by day. We both still have other jobs that we work on, but we see [Dos Swim] growing and we're like, ‘Oh my god, we need to figure out what we're going to do next,’ which is exciting, but also a little scary at the same time.”

“Sometimes you notice a returning customer for the fourth time and it's a small achievement,” adds Hess. “We really don't know where it's going, but I think at the end of the day, we just have our community, we work with our friends, and we try to make stuff that people want.”