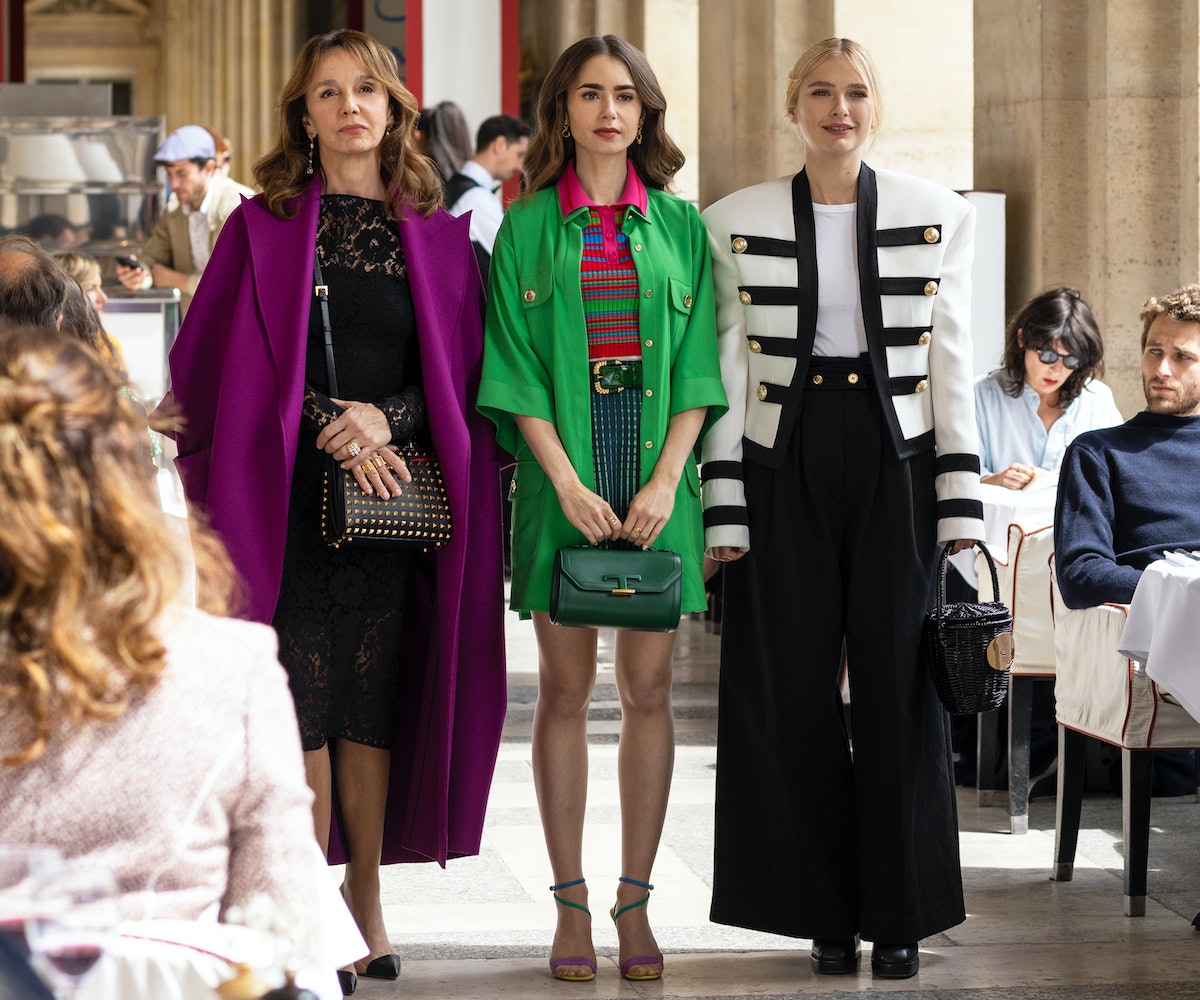 On Wednesday, Dec. 22, the hit rom-com Emily In Paris returned with the highly-anticipated second season on Netflix. Love it or hate it, Emily In Paris is perhaps one of our guilty pleasures and during quite an eventful season deux, we were not only presented with much-needed drama from love triangles, but we were also given some very memorable looks from our beloved characters, courtesy of costume designers Patricia Field and Marylin Fitoussi.

Just like its debut premiere, the most recent season has served us yet another interesting take on Parisian fashion — though, some of the outfit choices on the show teeter between tacky and “camp.” Since the release of Emily In Paris Season 2, viewers all over the globe have been scrambling to find the show’s latest outfits and featured designers, from elaborate gowns to power statement bags, and if that’s you, you’re just in luck.

Check out NYLON’s ultimate guide on how to embody the core aesthetic from our favorite characters, including our roundup of some standout brands and pieces that you can shop from Emily In Paris Season 2, below.

Warning: Spoilers for Emily In Paris Season 2 ahead.

Perhaps our most controversial style character of the bunch, Emily Cooper, played by actress and NYLON’s October cover star Lily Collins, is known for her overly maximalist wardrobe that borderlines tacky but in our eyes, she’s still très chic. Nevertheless, her bubbly personality is matched with her bold fashion taste, making a statement wherever she goes.

Throughout the series, we see our main protagonist is not afraid to have fun with some experimental choices made up of standout silhouettes, like tulle couture gowns, neon outerwear, fingerless gloves, and oversized frames. Although some may say the Chicago transplant’s style on the show is “absurd,” Cooper has made quite a signature aesthetic for herself that fans absolutely adore.

Maybe you’re looking to add some color to your closet or test out some new daring styles, see some coveted pieces from the show that Emily Cooper wears, including designers like Rianna + Nina, Rotate, and more.

Camille, Parisian socialite and Emily’s friend (or is she really?), is a complete sartorial contrast to our main star. While Emily typically opts for super statement fashion choices and layering vibrant mix-and-match prints, Camille (Camille Razat) is one of the more stylishly relaxed characters on the show, and her fashion taste embodies the quintessential French “It” girl. Often seen rocking simple and androgynous styles, Camille makes a subtle yet still memorable impression, with some fans noting that she’s the true style star in the series. We also see the character add a pop of color here and there to finish her looks, but never outshining the full ‘fit.

If you’re a minimalist at heart, Camille is a go-to inspiration as she’s seen in structured blazers, sleek mini bags, and neutral-colored shoes from Saint Laurent, Coperni, Maje, and even Dr. Martens.

Mindy Chen, portrayed by Ashley Park, is an heiress turned au pair who is pursuing a singing career and quickly becomes Emily’s best friend in Paris. Similar to Emily, Mindy is extremely fun-spirited with an infectious and loving personality that has fans rooting nothing but the best for her. Above all, she is another style star on the show, with her ultra-sexy fashion cues that exude confidence. Mindy has given us eccentric, performance-ready looks covered in ruffles, sequins, fringe, and so much more.

Channel your inner Mindy with some must-have “going-out” pieces, designed by Alessandra Rich, Prettylittlething, and even Patricia Field’s very own brand ARTFASHION.

Sylvie Grateau, played by Philippine Leroy-Beaulieu, is the soon-to-be-former chief marketing officer for the Paris-based marketing company Savoir who has very little enthusiasm for the new American girl sent to work for her. Though she tends to have a hard exterior, Sylvie simply refuses to settle for anything less than what she deserves, and her seemingly collected persona is also reflected in her style choices. In the show, we see Sylvie is a fan of monochrome outfits, timeless fashion, and a good coat, especially designer ones from Valentino, and she’s not afraid to indulge in bright colors and patterns as long as it makes sense.

When talking about standout style in Emily In Paris, we can’t forget to include our favorite Savoir employee Julien, played by Samuel Arnold. He was initially suspicious of Savoir’s newcomer Emily, calling out her ringarde (or “old-fashioned”) personality, but over time we see that the duo grow a trusting relationship and keeps our naive character in the loop on all of the office’s juiciest gossip. As a fan of couture designers, especially Pierre Cadault from the series, Julien’s fashion taste has become a living manifestation of the world around him by often wearing bold suited looks, colorful sweaters, and embroidered tops.

Who said you only had to stick to solid-colored blazers and pants at work? Though most of his printed button-ups and suits are out of stock, with most of them coming from ASOS, Julien is also seen sporting looks from Rianna + Nina, Kenzo, Casablanca, and more.