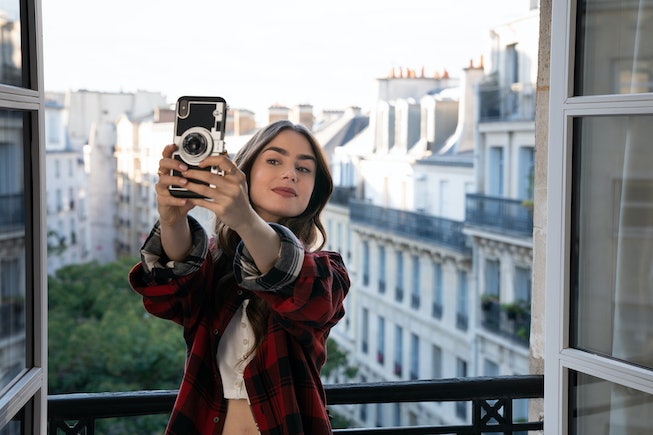 The last time we checked in on Lily Collins’ titular character from Emily In Paris, she was celebrating her then-recent, completely surprising Golden Globe nomination. The nomination was mostly met with earned criticism, but it did overshadow just how much many of us (myself included) enjoyed the Netflix hit — albeit in a “I hate how much I love this horrible show” kind of way. We’d all be lying if we said we weren’t looking forward to season two. And now, with the second installment of the show slated for a late 2021 release, show creator Darren Star has revealed a few new things about what excited viewers can expect from it — including the fact that Emily herself will finally “assimilate” to her French surroundings.

Here’s everything we know about Emily In Paris season 2 so far:

Starting with her hot chef hookup, Gabriel, the first trailer for the second season of Emily In Paris shows Emily handling an increasingly complicated love life. As the trailer opines, if you’re only going to do one year in Paris, do it right!

Season two of Emily In Paris sees Emily finally getting used to Paris.

In an interview with Variety, Star responded to one of the main critiques of the show: that it displayed an overly-glamorized vision of the vacation destination. “I think when someone goes to Paris for the first time, they are overwhelmed by the beauty of the city and that’s what they’re seeing,” he said. “I think, perhaps, a lot of viewers who lived in Paris for a long time didn’t quite understand that this was through the lens of a character who was experiencing the city for the first time. That’s how she was perceiving it — she was really struck by the beauty that was all around her.” As he clarified, “The first season didn’t cover that much chronological time.”

Emily will also vacation in St. Tropez and other places in the South of France.

That being said, Star admitted that season two will be slightly less rose-colored, saying, “For me, it’s the evolution of the character.” Revealing that season two will find Emily visiting St. Tropez and other dreamy destinations in the South of France, Star teased, “Certainly, the more quotidian aspects of life start to come in and I think that’s what’s going to happen to her.” He added, “Emily will embrace the city a little bit more,” even if she still will be struggling to learn her French. “When she got there, she got a bit of a free pass in the beginning,” he explains. “I don’t think it will be quite as easy for her in the second season. I think she will be more assimilated, in terms of living in Paris and stepping up to the challenges of learning the language.”

Emily In Paris season two will stream on Netflix this winter.

The show will return on December 22, 2021 — just in time to binge over winter break and wish that you, too, were an oblivious American named Emily enjoying the spoils of a brand new life in France.

NEXT UP
Culture
The White Lotus Will Return For A Third Season
Culture
Jenna Ortega’s Childhood Hobbies Included Animal Autopsies
Culture
Remember When Gossip Girl Made The Quintessential Thanksgiving Episode?
Culture
Paris Hilton’s Memoir Will Included Her “Most Personal Stories Yet”