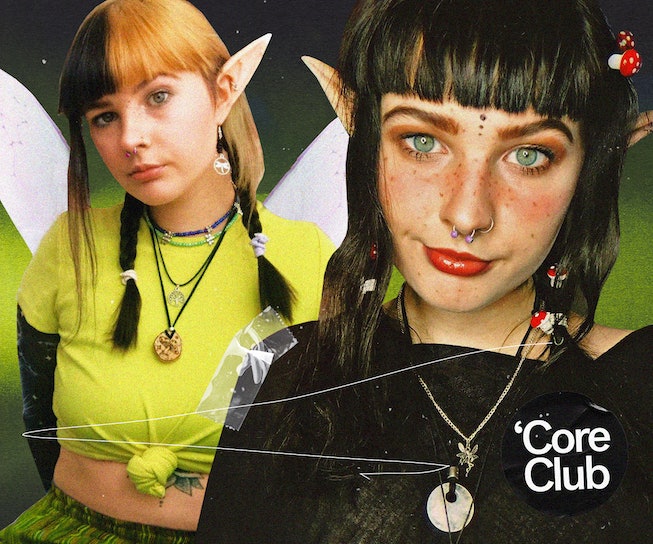 Whether it's a fashion trend on TikTok or a certain style taking over Instagram, internet aesthetics are always changing online. Our series 'Core Club breaks down the looks that you're starting to see a lot on social media and highlights the people and brands channeling it best. Next up: fairycore.

As the seasons change and the days get longer and brighter, our personal style shifts with it. Enter: fairycore, the latest internet aesthetic taking the fashion spotlight in all its glittery, warm glory. With at least 394K tagged posts on Instagram and more than 283M views on TikTok, it’s easy to see why the playful look is so popular right now, particularly as the world reopens to spring and all its new beginnings.

Rachel Weingarten, a fashion historian, says fairycore is the much needed optimism after the world was shut down from a global pandemic, political turmoil, and personal grievances. And like always, fashion follows culture. If 2020 was a year of trauma and transformation, fairycore is the rebirth after.

“Fairycore is accessible magic,” Weingarten tells NYLON. “Fairycore builds on the idea that as complicated — and scary — as life feels, there are small talismans we can hold or wear to make us feel better or at least able to face the world without being overwhelmed by despair.”

Talismans serve as fairy pendants, like cluttered charm necklaces and mushroom earrings. Martha from popular Etsy retailer Faeriebox tells NYLON, “I usually create and sell jewelry according to the seasons. Most faerie lovers adore crystals, so I incorporate different gemstones, which really helps add a magical touch. Anything mushroom-related also sells straight away.”

She adds the more obscure and ethereal — if they look like they were crafted by a tinker fairy versus bought in a store — the more appealing it is to buyers.

“Fairycore accessories are the opposite of worry beads,” says Weingarten. “If we look at good luck charms in general, they're a much more modified version of the accoutrements of fairycore: a four-leaf clover or heart or peace symbol reminds you to choose optimism. Fairycore allows you to embrace the tiny bits of magic you can still find on even the most ordinary day.”

The beauty of fairycore is that there is no recipe: Each item looks individually crafted because the aesthetic embraces the uniqueness of the wearer, even if there are staple pieces to complete the fairy look. For example, elements of fairycore can be traced back to recent history, long before it hit the internet mainstream (and our social media feeds) in 2021. From young women wearing flower crowns at music festivals to even little girls wearing tutus to school, the spirit of fairycore has always been within us. It’s just seeing a massive resurgence now, especially with fairy-adjacent media like Winx Club.

From young women wearing flower crowns at music festivals to even little girls wearing tutus to school, the spirit of fairycore has always been within us.

Fairycore also doesn’t subscribe to the same clean lines of style as, say, dark academia. There’s more of a range in what is considered to be fairy. “We’re throwing the rules of fashion away. We’re raving about raw edges, digging the distressed, and we’re completely fascinated by a flounce. If it sparkles, well, you’re a fairy,” says Lottie of Lemon Fairy Shop to NYLON.

She also adds that popular fabrics include inspirations from artists like Monet, who was drawn to impressionist landscapes that look other-worldly. “In the past few months, clothes such as napkin skirts, corsets, and milkmaid-style clothing have been snowballing into popularity,” says Lottie, noting that the more lavish the design, the more popular they become.

Fairy aesthetic relies on the themes of nature that you might find in a children’s book: fantastical animals (unicorns and dragons), dreamy landscapes (an enchanted forest), elements of magic (wings), etc. Unlike its cousin, goblincore, fairycore leaves a more romantic, whimsical taste in your mouth. It manifests itself in style with pointy hooded coats, distressed gloves, chunky wool knee socks, mushroom earrings, and glittery crop tops.

Since fairycore is so rooted in nature, it’s also important for followers of the aesthetic to shop as environmentally-friendly as possible. But as the sentiment goes, there is something magical about coming together to take care of something you love. It’s an act of kindness anyone can do.

“Fairycore adds a bit of the mystical to the ordinary,” says Weingarten. “It gives you the same sentiment of applying pastel makeup or ethereal hair accessories after a long cold winter and feeling as though you're actually enveloping yourself in a better vibe. Even if you’re not physically in a better place, you transform yourself and thereby transform your world.”

NEXT UP
Fashion
The Mini Skirt Was The Must-Have Celebrity Fashion Item Of 2022
Culture
On The List (With Melissa Rich): Is The Party Venue Recession Upon Us?
Fashion
Coach Reissues Y2K Favorite Demi Bag
Culture
An Exhaustive Breakdown Of The Balenciaga Controversy