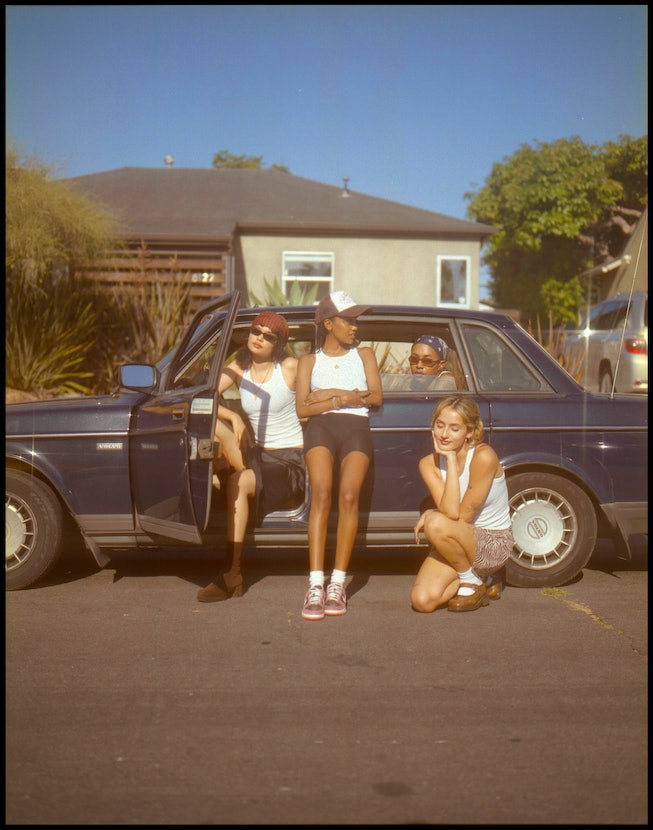 Since the Black Lives Matter movement sparked protests and calls for systemic, anti-racist change, people across the country have found ways to show their support, from designing streetwear for racial justice to shopping Black-owned businesses. Donations have especially become common practice, and a new Instagram shop, called Finds4Funds, is giving all proceeds from its vintage offerings to charities that benefit Black Lives Matter.

Colette Taheri and Sirena Warren, college students who both grew up on the Westside of Los Angeles, were already selling their old clothes on Depop and donating the money they earned to fundraisers that they supported. But since the online marketplace takes a cut from their sales, they decided to turn to Instagram to reach more people and make sure all of their proceeds are going towards a good cause. Taheri and Warren brought on their friend Myles Xavier, a fashion design student at Parsons who they met in New York, and he introduced them to Andrea Jacob, a recent NYU grad from Orange County.

Together, they launched Finds4Funds. On June 8, they posted their first drop on Instagram, including Nike Air Max sneakers, Carhartt pants, and T-shirts by skate brand F*cking Awesome, to name only a few. All of the items cost under $60 and each piece sold out.

"We have this energy that we want to be supporting the movement and our community in a more powerful and impactful way and everything kind of coincided at this perfect time," Jacob tells NYLON. "I think long-term we can generate a lot of attention and money to the cause even after these online conversations kind of die down."

To come up with inventory, they turn to their own personal networks — friends, mutuals, and online acquaintances who are all mainly involved in art, music, or fashion — for donations, ranging from designer-name archive pieces to vintage denim and graphic tees. These items are either shipped to or dropped off at Warren's home, where she and Taheri curate, shoot, and ship each purchase. Meanwhile, they're in constant communication with Jacob, who handles the business side, and Xavier, who creative directs the shop's overall vision.

Word of Finds4Funds got to Devon Lee Carlson, too, and she's donated items from her own wardrobe, like a Juicy Couture tracksuit and a vintage cotton-candy-swirl print dress, which has helped garner more buzz around the online shop. "She decided to take pictures in the clothes for us and decided to post for us," recalls Taheri. "We were just really grateful to even get a donation from her, but she really went above and beyond to help us."

Since its launch in June, Finds4Funds has donated nearly $15,000 across 16 different charities that benefit Black Lives Matter, and almost every item has been sold (except for three — two sweaters and a pair of Calvin Klein pants — since this piece was published). The group decided to spread out its donations in weekly drops every Tuesday, so they would have time to answer DMs (about 100 to 200 at a time) and ship everything in a timely manner.

"We learn a lot from every drop that we do," says Warren. "We know what not to do next time, and what to do better. It's been a lot of growing, but it's a really fun process. I'm really proud of all of us."

Since Finds4Funds gives its donations through the online fundraising platform ActBlue, there's limitations when it comes to the charities that are included. "It makes you think what level they have to be on to be able to be on that platform," notes Jacob. "How can we support smaller charities that don’t have access to ActBlue?"

Warren sees future drops being dedicated to specific charities each week, while Xavier and Jacob hope that as Finds4Funds grows, they can make an impact on the Black community not only through financial support, but on a cultural level, too.

"What's awesome about Finds4Funds is that there's so much room for us to evolve," adds Warren. "This is just the beginning and that's what's so amazing. There's so much more we can do."

See more of Finds4Funds' best pieces, below, and follow the shop on Instagram (@finds4funds) for its latest drops every Tuesday.