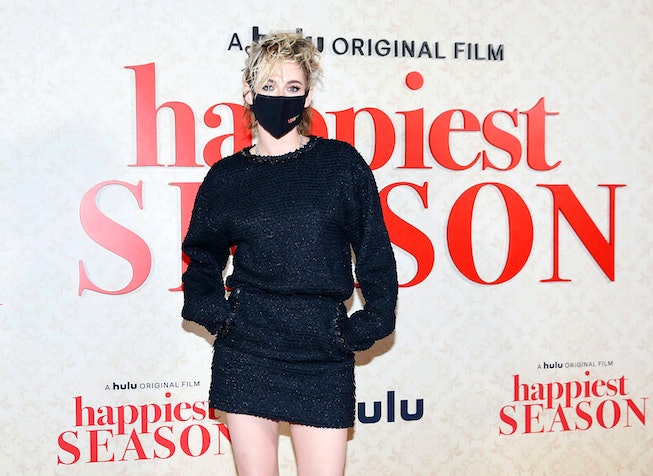 Kristen Stewart is not one to let a face mask cramp her style. The actor attended the drive-in premiere of her new Hulu film Happiest Season on Tuesday night in Los Angeles, wearing an all-black Chanel look, vegan pumps from Aera, and a "Love Wins" face mask from Re/Done, which just so happens to be on sale right now.

After the red carpet, Stewart ditched the heels and skirt, changing into a pair of ripped black jeans and a green bomber jacket while speaking to the crowd with co-star Alison Brie, who opted for lightwash jeans and a wool blazer.

Stewart also stars alongside Schitt's Creek star Dan Levy in the new film, which premieres on Wednesday, Nov. 25. The actor recently revealed that Stewart has been hiding a secret talent from the world: the ability to effortlessly smash a beer can on her head.

"I tried it once, hit my head and was like, 'This is too, I'm not — this is not for me,'" he told The Today Show. "Kristen, of course, does it flawlessly, finishes the beer and I'm left holding a beer in my hand like, well this is why I wasn't popular in high school."

Check out Stewart's premiere looks below, and shop Re/Done's "Love Wins" mask before it sells out.