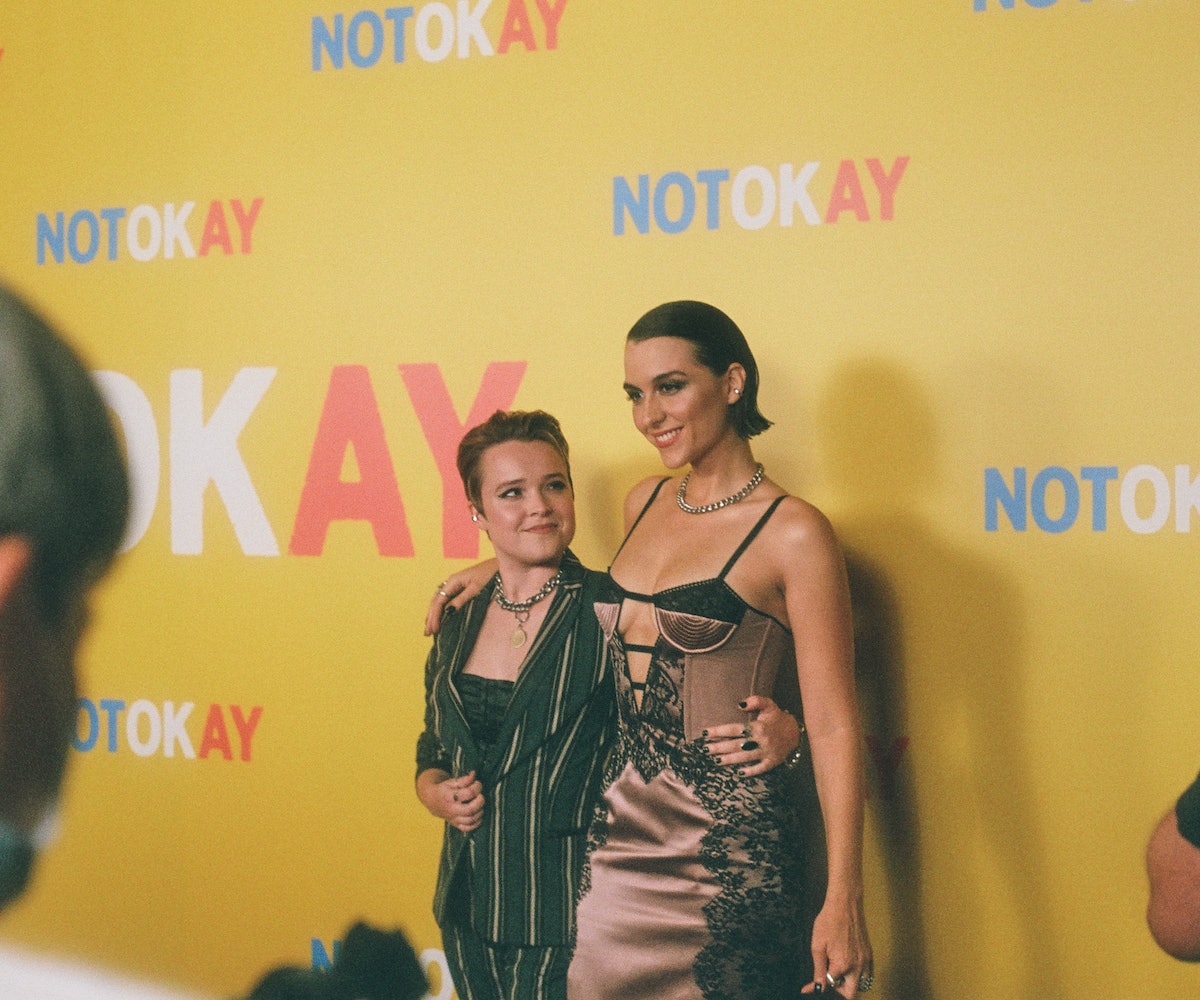 Not Okay may technically be a streaming film (available on Hulu now), but that doesn’t mean there shouldn’t be a traditional red carpet event to celebrate its premiere on Thursday, July 28. For Quinn Shephard, who wrote and directed the movie starring Zoey Deutch as a canceled influencer imitator Danni Sanders, the chance to see an actual audience react to your work in real-time is irreplaceable.

“Everyone laughed and cringed a lot, which was so validating to hear live,” she tells NYLON. “Not Okay is a streaming film, so I love taking the opportunity to see it in person with an audience any time I can. The energy was amazing — it’s what you dream of when you’re in a tiny dark editing room for nine months trying to psychoanalyze your future viewers.”

After writing and directing her own film (Blame, 2017) in the past, Shephard is no stranger to red carpet events. So far, she’s nailed down her getting-ready ritual to sleep and “enough skincare on that I wake up looking like an oily gremlin, then transform a la The Princess Diaries upon my shower and hair and makeup.” But with Not Okay’s press tour on a tight schedule, her premiere day routine was cut down to only three minutes before glam time. “Yes, including the shower part — sorry to anyone on my team who I accidentally flashed,” she notes.

Styled by Ryan Young, Shephard wore Gucci for the special night, while hairstylist Dominick Pucciarello and makeup artist Liz Oliver made her beauty look edgy and androgynous to juxtapose her femme and classic dress. “I am usually a trousers and chunky boots kind of girl, so this was a bit outside my comfort zone,” she says. “But I ended up loving the final result.”

The premiere was a star-studded affair, including appearances from Deutch and co-star Dyan O’Brien, along with some of Shephard’s closest loved ones. “My favorite moments from premieres are always unexpected and simple,” she recalls. “It’s seeing my best friend from middle school there, running into someone in the bathroom and hiding together for a minute, hugging my parents next to a display of influencer merch from my film — still too meta for me to comprehend — and, of course, taking my makeup off at the end of the night.”

Though Shephard is taking it easy until she shoots her next Hulu miniseries in the winter — “I’m not allowed to say more yet, but there will be news in the coming weeks about the project!” — she’s still soaking up the memories and feelings from her latest red carpet. “Premieres are overwhelming, wonderful, and very vulnerable for me,” she says. “It’s a night where you’re watching everything you’ve worked for years be born into the world, which is such an honor — but incredibly nerve-wracking, too.“

Ahead, see more behind-the-scenes photos of Quinn Shephard as she gets ready for the premiere of Not Okay, along with cameos from her mom Laurie Shephard and fiancée Nadia Alexander, who are both in the film.

Starting fresh!
NO TIME FOR PEDICURES.
The things we did to get my bangs to slick back…kinda chic tho, ngl.
My beautiful mom stopped by my suite while I was getting ready to give me some good mom energy and love! Very needed on premiere night.
In my final form!
Gucci Gang Gucci Gang Gucci Gang
There’s always time to kiss my stunning partner...
...who is also one of the very talented stars of the film.
En route!
"It’s giving Oscars.” - my fiancée
On the carpet! Not a thought behind my eyes!
Immediately removing my heels at the first opportunity.Photos by Emma Craft

Not Okay is available to stream now on Hulu.

NEXT UP
Culture
Caroline Polachek In KNWLS & More Party Photos You Missed
Culture
On The List (With Melissa Rich): How To Throw The Ultimate Apartment Party
Fashion
The Best Celebrity Fit Pics From Paris Men’s Fashion Week
Fashion
The Wildest Front-Row Looks From Couture Week In Paris
Style + Culture, delivered straight to your inbox.