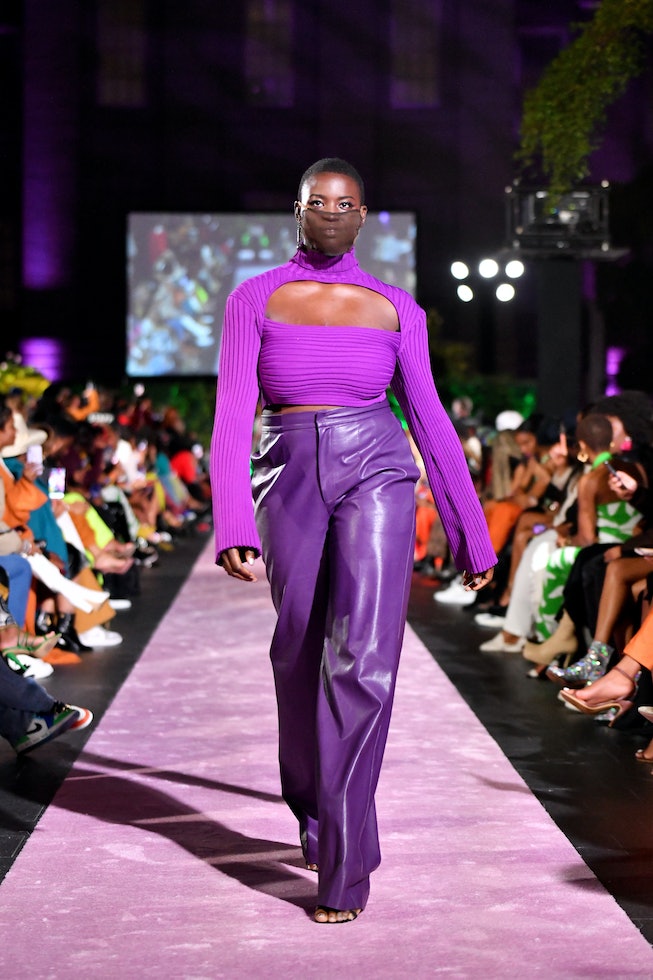 enterOn Tuesday, Nov. 16, designer of the luxury brand Hanifa, Anifa Mvuemba, transformed the National Portrait Gallery in Washington D.C. into a whimsical reality, encouraging all in attendance to live out their wildest dreams — even those that are years in the making.

In May 2020, Mvuemba sent shockwaves through the fashion industry with a 3D virtual presentation of her Pink Label Congo line. The show featured ethereal silhouettes wearing the sophomore collection, marrying the worlds of fashion and tech during a time when brands were still figuring out how to go virtual with their designs. In D.C., however, attendees were able to experience the mind of the designer IRL, starting with Mvuemba opting to hold the show in her hometown rather than New York, which is the expected path for thriving fashion designers.

Though, for Mvuemba, home is where she feels the most comfort and love. “There’s talent here. I made it out of D.C., and I’m still doing it in D.C.,” she tells NYLON. Ahead of the show, the designer leaned on her community for model casting and content creation, calling for all models, hair stylists, makeup artists, bloggers, photographers, and videographers to grab at the chance of being a part of the night. “It was so important to give opportunities to local artists. Eighty percent of the models are D.C.-based and I wanted to make sure that we supported them and showed the city we got it, too,” she adds.

That support was returned tenfold as family, friends, editors, and more arrived in droves wearing pieces from Hanifa over the years since its launch in 2012 — a testament to the brand’s evolution and dedication to creating something for every woman to feel their best in. Upon entering the historic museum, attendees were met with towering white walls accented with Hanifa’s logo script in soft pink and complementing pink lights, proving to be the perfect photo op as people lined up to snap their ‘fits before the show started. The plush pink-carpeted catwalk was staged in an airy pink-lit room, surrounded by greenery, clear chairs adorned with the brand’s name, and water-paneled floors that created an enchanting oasis. In the background, an orchestra played renditions of Beyonce’s “Sweet Dreams” and Drake’s “Laugh Now Cry Later.” While this show marked Hanifa’s debut in-person runway show, Mvuemba made sure not to leave anyone out, as the anticipated event also streamed live on YouTube for all of the brand’s fans to tune in.

As the show commenced, a documentary-style video played featuring the designer on her journey of building Hanifa. Mvuemba sought to make an impact beyond clothes, explored the importance of home, the trial-and-error of running a business, as well as the reminders that her journey is fate. As the video came to a close, the first model showcased the first look of Hanifa’s Fall 2021 collection, dubbed “Dream,” wearing an eye-catching sapphire blue patent leather trench coat with white knee-high boots, called “Zoe,” which mark Mvuemba’s first foray into footwear. In addition, the minimalistic but party-friendly “Zeta” strappy sandal is seen in three different colorways and paired with mini dresses embellished with balloon sleeves, sweeping floor-length evening gowns, and a cool, casual going-out-top-and-jeans look.

Paying homage to the brand’s 10-year anniversary, Mvuemba fused designs from the past, present, and future. “Every single piece reminds me of a time. Maybe last year or something I designed five or 10 years ago,” she says of the brand’s evolution. The 35-look collection included signature pieces and also introduced new styles and silhouettes, like structured denim, fringe, dramatic sleeves, and a host of bold colors. Mvuemba says that she once tried denim in the past but it didn’t work. Though, it was clear in the final look — a voluminous halter-style denim gown — that she finally perfected the material.

While Hanifa’s virtual show last year visualized curvy figures that are not typically included in runway shows, her live presentation further delved into her commitment to body inclusivity, featuring a diverse cast of models. For Mvuemba, creating a world where women see themselves as limitless has been woven into the brand — both literally and figuratively — and her message shined through with every piece that graced the runway.

As the show concluded, Mvuemba took to the pink carpet in a pistachio-green pleated dress with white stitching and a pair of her own “Zoe” boots. As she moved through the dream world she created, she received a standing ovation from the audience, composed mostly of Black women and men. Shortly after, beverages and small bites were served before guests departed to make their way to the after party, which was held on the rooftop of the Eaton Hotel in downtown D.C. For the rest of the evening, people celebrated Mvuemba and the all of the dreams that she made come true — not only for herself, but for her brand Hanifa and her beloved home, too.

See the rest of Hanifa’s Fall 2021 collection from its debut runway show, below.

Photos by Getty Images/Shannon Finney
NEXT UP
Fashion
Dickies & Gucci Vault Drop A Sparkling, Studded Holiday
Culture
An Exhaustive Breakdown Of The Balenciaga Controversy
Culture
Mowalola Teams Up With Bratz For A Daring, High Fashion Collection
Fashion
Reformation & Canada Goose Team Up To Warm You Up