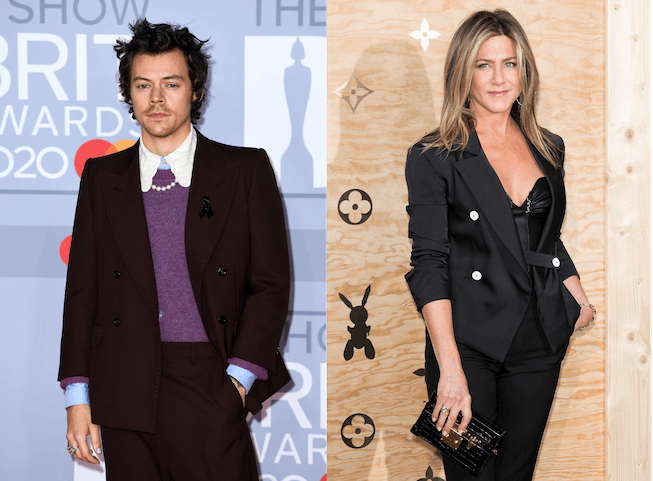 Harry Styles and Jennifer Aniston may be (fashion) soulmates after all.

The internet went wild after realizing the unlikely pair were seen twinning in a color-block suit from Gucci. Styles wore the matching set first back in May at the 2021 Brit Awards with sneakers and a brown handbag. Aniston most recently wore the same outfit, as she posed for her September 2021 cover story with InStyle, which was revealed on Tuesday, Aug. 3. She finished her look in white heeled loafers, also by Gucci.

Soon after, fans quickly noticed that not only were the two in the same outfit. “IT’S JENNIFER ANISTON AND HARRY STYLES WEARING THE SAME SUIT FOR ME,” wrote @centralperksabi on Twitter on August 3. But this isn’t exactly the first time this fashion coincidence occurred. On August 4, writer and fashion columnist Evan Ross Katz posted side-by-side photos on Instagram with the caption, “Harry Styles and Jennifer Aniston wore the same outfit not once but TWICE. So don’t you DARE tell me they’re not the same person with the ability to morph between time and space.”

In the following slide, Katz posted another previous instance of Styles wearing a white “Save the Drama for Your Mama” tee that Rachel Green, Aniston's most notable character from the hit series Friends, sported in season 10.

The actress responded to the internet frenzy through her Instagram story on August 4. On the first slide, Aniston wrote, “Just call me Harriet Styles.” And on another slide, she added, "👀.” Totally a coincidence.