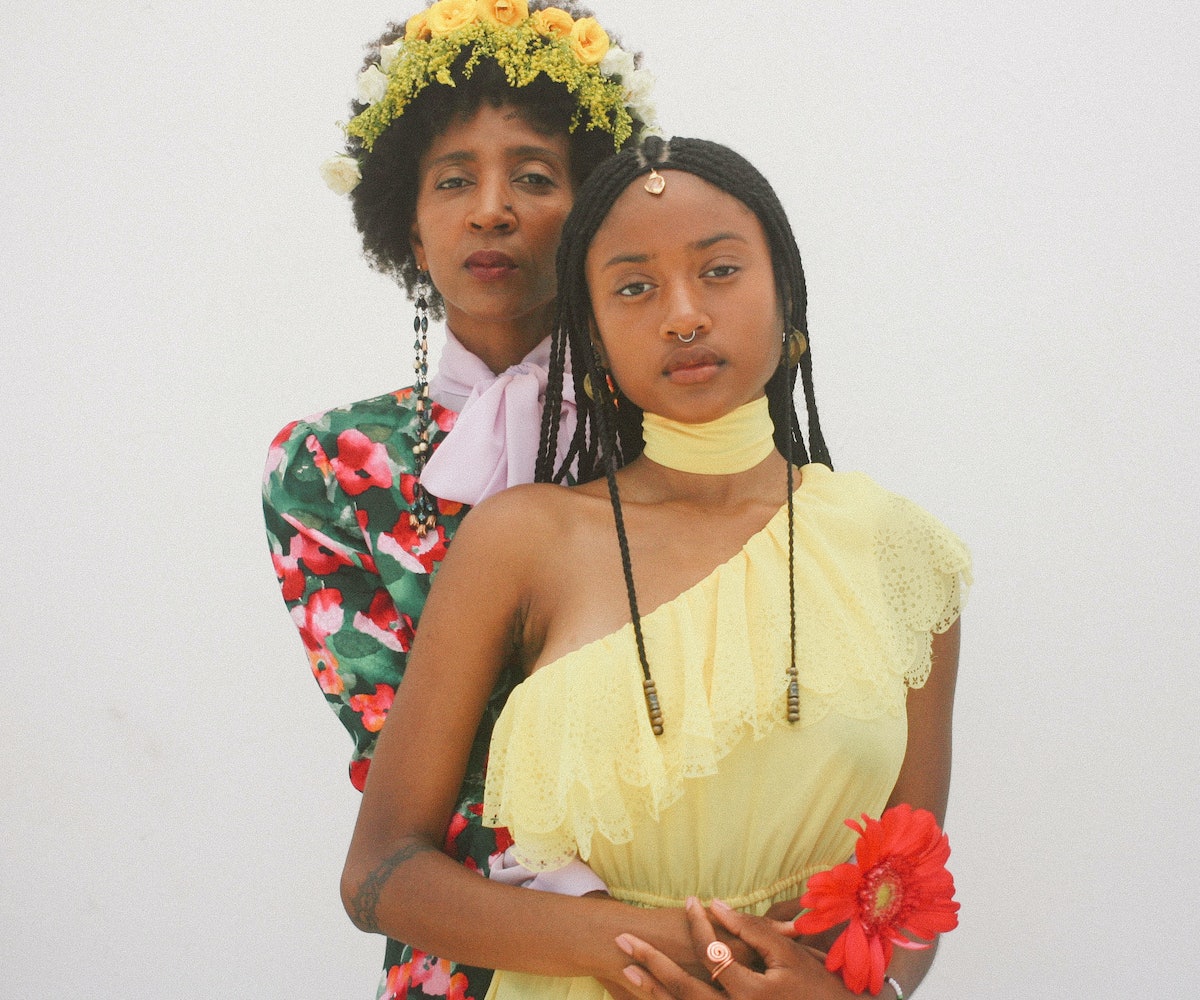 Courtesy of House of Aama

What originally started as a hobby in the form of an upcycling Etsy shop by a then-teenage Akua Shabaka and her mother Rebecca Henry, has evolved into House of Aama, a celebrated clothing line that’s been featured in Vogue, InStyle, Glamour, Harper's Bazaar, and more. The brand was recently announced as one of the featured designers in the Black in Fashion Council's upcoming New York Fashion Week showroom, set to present its latest collection in February. With a booming fashion line, Henry and Shabaka may just be the Kris and Kim of the fashion world.

“We have our fights and our squabbles and our differences, but it actually ends up being a strength of ours because Akua is able to see things from a different vantage point than me,” Henry, a practicing lawyer in Los Angeles, tells NYLON over Zoom. “I'm 53, she's 23. So we're in different generations. Sometimes our creative vision is a little bit different, as well, but it's actually a strength of ours and it adds to our business. We can have more of a 360-degree view of things that we're looking at. It really adds to things.”

She pauses, then smiles, “But yeah, we fight.”

Each House of Aama collection stems from a single story, often inspired by Henry and Shabaka's own ancestral history and southern roots. From there, the two plunge into books and archival research, quite literally weaving a story into the clothes.

“We're working a lot on our familial stories and our legacy,” Shabaka says. “We learn a lot about each other from just unpacking where we are and where we come from. There were certain things I didn't know about our family that were discovered when we were making Bloodroot [for Fall 2017] and it allowed for us to just have an even deeper relationship with each other because of where we come from.”

For House of Aama’s most recent collection, a capsule of nude shades on some of the bestselling pieces from their Bloodroot collection, the pair looked to the varying colors in their own lineage to address a hot-button issue in fashion.

“Typically when you think of nude, we think of peachy tones or blush tones. It doesn't really reflect the full color spectrum of what nude can mean when you start adding people of color. That's when we decided to just expand the conversation of what a nude capsule or what a nude colorway edit could be,” says Henry. “Our family has various different colors and hues reflected in the family skin tone. We decided to build a story around that and focusing on a celebration of what sometimes can be a tricky or touchy topic.”

Shabaka, a recent graduate of Parsons, is the self-described “task-master” of the two. The one who keeps the production running strategically and efficiently. After spending her teenage years operating her Etsy shop with Henry, the two decided to take the business to the next level once she went off to college. Instead of joining Parsons for fashion design, she opted to major in strategic design and business management.

That entrepreneurial background became even more useful in the beginning of 2020. After the COVID-19 pandemic, most small fashion brands struggled to stay afloat. Even large retailers like Neiman Marcus, Brooks Brothers, and J.Crew filed for bankruptcy as a result of the economic crisis. Henry and Shabaka saw an opportunity. After Shabaka lost her other job, she turned her focus to the brand full-time while Henry’s schedule opened up after in-person court hearings came to a halt.

Then, the Black Lives Matter protests came at the beginning of the summer in response to the murder of George Floyd. Media outlets were now publishing lists of Black-owned brands and businesses, with House of Aama securing a spot on many.

“We had a lot of new eyes on us,” recalls Henry. “We were actually able to quadruple our business last year, and I think that was in part due to the fact that we were well-positioned and that we took advantage of the opportunity of having more time.”

House of Aama went on to receive two grants in 2020, one from Fred Segal and the other from the CFDA. Perhaps more important than the money, Shabaka says, is the open door to a new plane of valuable connections.

“Now we're in conversations with these teams and they really believe in our business and they believe in our longevity and they are supplying resources that will help us,” she says. “It just puts our face out there in a different way. We've been lucky enough to have a pretty organic process and organic momentum. So now this shows that we're not going anywhere. We're going to be here for a while and we'll move at the pace that's right for us, but we are indeed moving.”