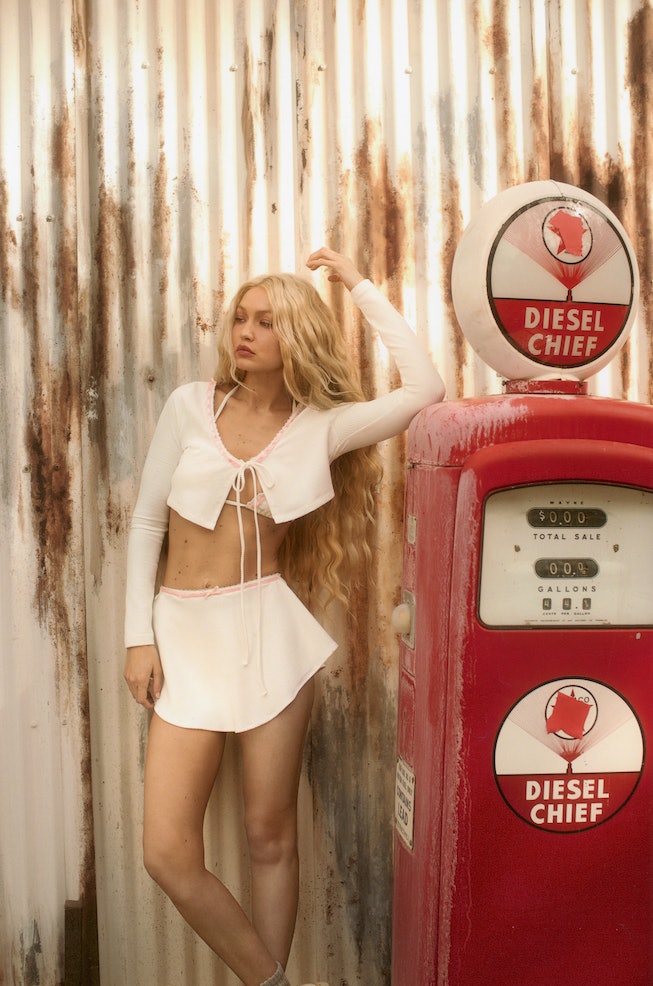 Editor’s Note: This article has been updated from its original version to include information on the collaboration’s second drop.

Just a couple of days following Gigi Hadid’s 27th birthday, Frankies Bikinis announced its next celebrity collaboration on Monday, April 25, teaming up with the supermodel for perhaps the dreamiest collection we’ve seen from the cult-favorite swimwear label yet.

A longtime friend of founder and creative director Francesca Aiello, Hadid and her first-ever swim collection is full of nostalgia. Dubbed “Americana,” the swimwear and loungewear pieces are inspired by the Hadid’s family home and farm in Pennsylvania.

In a series of photos lensed by another one of their childhood best friends Alana O’Herlihy, both Aiello and Hadid can be seen wearing pieces from the upcoming launch with sunshine and greenery as the backdrop. For instance, Hadid is captured in a slew of cottagecore-inspired styles, from baby blue pointelle mini skirts, strappy triangle bikinis, and an adorable yellow crop top and boy shorts set. Hadid has also recently dropped the second installment of her collab, offering keys styles like swimwear and signature silhouettes available in both adult and children’s (Lil Frankies) sizing.

“Gigi is someone that is so special and so inspiring to me,” Aiello said in an official statement. “She is creative, hard-working, kind, and loving, and combining those incredible personality traits with our deep-rooted friendship is what really made this collection not only fun to create together but also to shoot together.”

Added Hadid, “We designed this collection with so much love, and I believe that really shines through in the details within the fabrics, prints, and styles we chose to use. Both Frank and I have very social lives but also are big homebodies, and the collection really embodies that side of us.”

Ahead, find out everything you need to know behind Gigi Hadid and Frankies Bikinis’ swimwear collaboration, and how to get your own piece of the collection, too.

What is the Gigi Hadid & Frankies Bikinis swimwear collection?

There is a range of dainty details to choose from within the Gigi Hadid x Frankies Bikini collection, like bows and ruffles, floral and plaid-printed pieces, plus a number of other silhouettes in eyelet and terry cloth fabrics. Taking on romantic colorways, such as warm yellow and baby blue, styles include bikinis and one-piece swimsuits with a full range of coverage options. The loungewear is just as dreamy, with offerings like bodysuits and cardigans, and even accessories like hats and headscarves.

The second drop of the Gigi Hadid x Frankies Bikinis collaboration includes a new offering of adult and children’s swimwear and apparel. The latest release’s styles include ruffled swimwear in dreamy eyelet fabrics and pastel yellow prints, adorned in delicate floral details. There are also dresses and thermal loungewear made from the brand’s popular pointelle design and waffle fabric. Some of the new additions are also in the children’s wear line, as well, which features tankinis, bucket hats, and comfy cardigans.

You can also expect to see personal details that Hadid has incorporated into this collection herself, such as a tree stump with the marking “G+F” that symbolizes her friendship with Aiello, as well as a baby and mama deer that represent the joys of motherhood. Sizes for the collaboration are available from XS through XXL in select styles, with prices ranging between $45 to $185. The Lil Frankies line can be purchased for $40 to $75 and in sized 2T through 6T.

When and where can I buy the Gigi Hadid & Frankies Bikinis swimwear collection?

Gigi Hadid’s collection with Frankies Bikinis will be available to shop exclusively on frankiesbikinis.com. The first drop of the collection consists of 56 styles of swimwear and loungewear and was released on Wednesday, May 11. A second drop of 41 styles followed on Thursday, June 2.

See some of the campaign images in more detail, below.

NEXT UP
Fashion
DL Eyewear’s New Sunglasses Are For The Schitt’s Creek Fans
Fashion
Getting Ready With Richie Shazam For Her Directorial Debut
Fashion
Jisoo Of Blackpink’s Best Fashion Moments On The Red Carpet
Fashion
How To Style The Mini Skirt In 2022, According To Celebrities