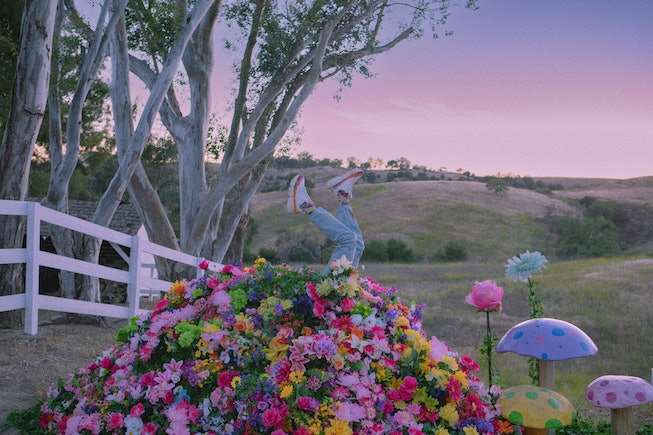 Since teaming up with New Balance in 2020, Jaden Smith will be releasing another collection with the sportswear brand. Titled the “Trippy Summer Pack” after his anticipated new song, the upcoming drop is inspired by Smith’s, well, trippy era, as he explores psychedelia through music. It will include two new colorways of Smith’s Vision Racers, a vegan-friendly chunky sneaker made from partially recycled materials.

The collection’s campaign draws imagery from Smith’s visual artwork for his new music, a kaleidoscopic, rainbow-tinted video filled with flowers, mushrooms, and grassy knolls. It’s giving us cottagecore vibes — but if cottagecore was tripping on LSD.

We wouldn’t be surprised if Smith was familiar with the trending aesthetic. After all, his latest outfits, which you can see in the video, below, have been tapping into today’s most coveted items, from tie-dye and graphic sweater vests to kidcore-leaning beaded necklaces.

What Is The New Balance & Jaden Smith’s Trippy Summer Pack?

Smith has been steadily releasing his New Balance Vision Racers in a slew of colorways, but this upcoming drop expands with apparel, as well. Not only will Trippy Summer Pack include Vision Racers in white with two new colorful styles — a bold and bright orange, purple, and green, or an ombre sole of pastel hues ($150 each) — the release will also offer a graphic hoodie ($90) and T-shirt ($45).

The Trippy Summer Pack will be available on Friday, July 30, alongside his new song, “Trippy Summer.”

Where Can You Get The The New Balance & Jaden Smith’s Trippy Summer Pack?

You can purchase the Trippy Summer Pack’s Vision Racers and apparel on New Balance’s website, as well as select retailers across the globe.

Ahead of the collab’s upcoming drop, see the campaign and sneakers in more detail, below.