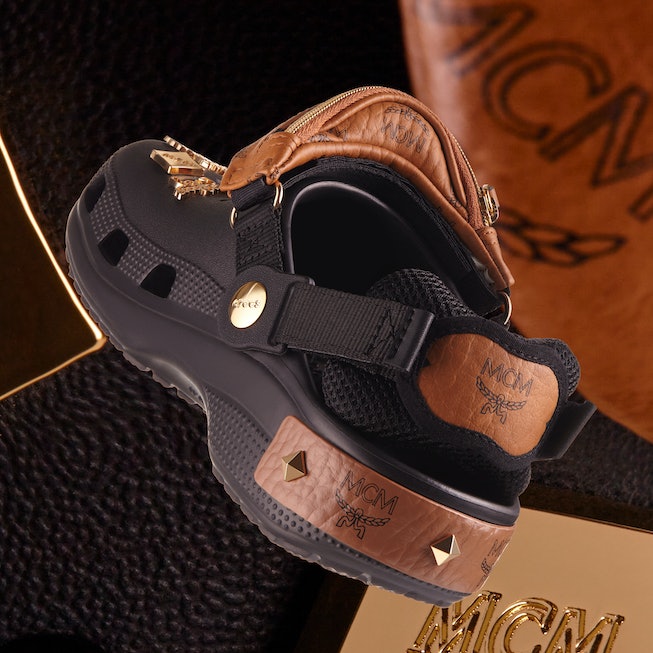 After a few days of teasing and sneak peeks, designer fashion brand MCM just dropped a collaboration with Crocs on Wednesday, June 29. Though Crocs is not new to creating limited-edition collections with big fashion (and celebrity) names, this is MCM’s first partnership with the popular footwear brand.

MCM joins a running list of designers who have put their own sartorial take on Crocs’ styles, including Balenciaga, Christopher Kane, Kurt Geiger, Lazy Oaf, and street and skate brand Palace, to name a few. And almost every release sells out! It’s no wonder then, that a brand like MCM would link up with Crocs to release exclusive styles of the coveted, classic clogs. Ahead, find out all of the details behind the latest designer collaboration from the brand.

What is the MCM x Crocs collaboration?

The collaboration features two exclusive designs for Crocs’ signature clogs, featuring an unmistakable MCM influence. The “Belt Bag Clog” ($390) is available in black and boasts MCM’s recognizable Cognac Visetos logo, which is found as an embellishment on the shoe’s heel sling, along with a small detachable fanny pack that can carry small items or even be worn as a bracelet. The soles sport a combination of a black base, MCM’s well-known cognac color, and 24K gold details. There’s also custom Jibbitz in the shape of MCM’s logo for an elevated, decked-out look.

The “M-PUP Clog” ($330) comes in a vibrant tennis green color and MCM’s French bulldog (or M-PUP) motif in black accenting the shoe design. It also includes a plated chain resembling a dog collar along the strap, while the heel part of the clog is embellished with a monogrammed stripe and studs. Similar to the collaboration’s other style, this clog also features Jibbitz in the form of silver metal MCM logos and a brightly-colored M-PUP.

When and where can I buy the MCM x Crocs collection?

As of Wednesday, June 29, at 9 a.m. EST, the MCM x Crocs collection has been available for purchase exclusively at MCM stores and online at mcmworldwide.com.

NEXT UP
Fashion
Telfar Thinks You Need An It Wallet To Go With Your It Bag
Culture
Loewe’s Howl's Moving Castle Collection Is An Anime Dream
Culture
Puma Releases Art Book Who’s Who: New York Local Edition
Fashion
Target’s Future Collective Gets Buoyant With Gabriella Karefa-Johnson
Style + Culture, delivered straight to your inbox.