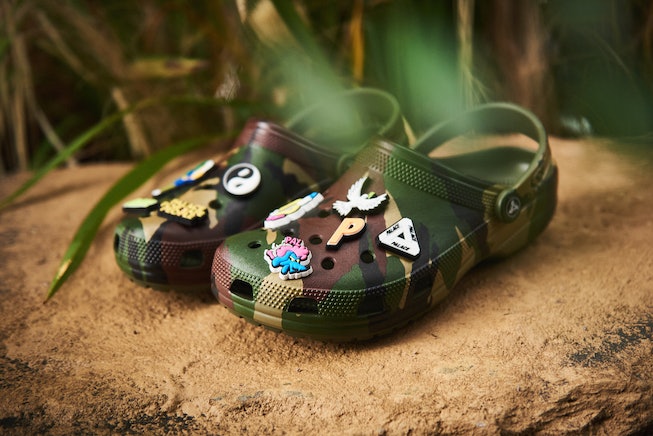 Following their first release back in July 2021, Crocs has teamed up with skateboarding brand Palace once again for the second drop of their coveted camo-printed clogs — just in time for the new year.

Unlike the desert neutral-hued pattern in the summer drop, the latest Crocs x Palace Classic Clog is set to launch a forest camouflage print for its second collaboration, featuring an array of brand new custom Jibbitz charms to decorate the one-of-a-kind silhouette.

Over the past few years, Crocs have undoubtedly become a wardrobe staple among many internet stars and A-list celebrities including Justin Bieber, Bad Bunny, Post Malone, Bretman Rock, and more. Known for its ultra-comfy and lightweight design, the sought-after shoe has been ubiquitous. According to a report from CNBC back in July, the footwear brand has brought in a record-breaking revenue of $640.8 million, and if you’re not yet convinced of the brand’s impact quite yet, Kendall Jenner was also seen wearing the controversial Realtree camo-printed style back in August, declaring her love for the “ugly” shoe not so long after on The Tonight Show Starring Jimmy Fallon.

If you’re looking to cop the upcoming limited-edition Crocs x Palace release, here’s what you can expect and how to purchase the shoe, below.

What is the Crocs x Palace Classic Clog Shoe?

For the second release, Crocs x Palace is serving a slightly different spin on the Classic Clog design. While the first drop offered a light desert printed design, the upcoming style is set to arrive in a forest-inspired camouflage color palette of military green, brown, and black.

Similar to the last drop, which had 11 Jibbitz charms including Palace’s triangle logo, a turquoise turtle, and a small portrait of Jesus, the Crocs x Palace new silhouette will also come with custom Palace Jibbitz charms. You can expect to receive a range of rare multicolored motifs that can be added to each clog, like Palace’s triangle logo, a four-leaf clover, the letter “P,” the ying-yang symbol, and more. As well as the all-over print across the silhouette, Palace has also created a range of custom Jibbitz charms that can be added to each clog. Each shoe is then finished off with a Triferg logo on the footbed and straps.

When and where can I buy the Crocs x Palace Classic Clog Shoe?

The Palace x Crocs Classic Clog is set to drop online at palaceskateboards.com on Friday, Dec. 31, starting in the U.K. at 11 a.m. GMT and in Europe at 12 p.m. CET. You can also cop the shoe in the U.S. at 11 a.m. EST, while Japan and China will receive a later release on January 1, 2022, at 11 a.m. local time. In the meantime, you can check out photos of the shoe in more detail, below.