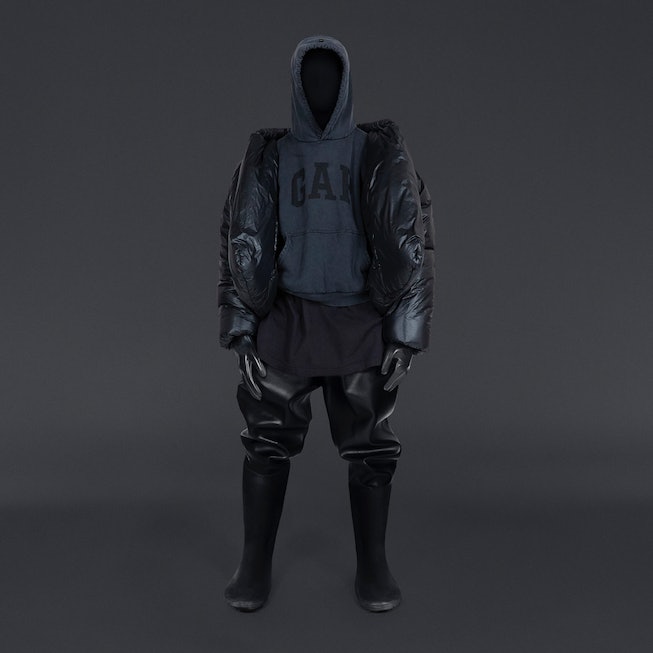 Editor’s Note: This post has been updated from its original version to include information about Yeezy Gap Engineered by Balenciaga arriving at Gap stores and the brand’s new video game.

We’ve already been hit with one of 2022’s biggest fashion collaborations — or, according to the parties involved, “creative exploration” — to date so far. As part of Kanye West’s 10-year deal with Gap, the fashion line Yeezy Gap announced upcoming releases that will be “engineered by” Balenciaga, specifically its creative director Demna Gvasalia, who now goes by his first name in a recent name change. Titled Yeezy Gap Engineered By Balenciaga, the upcoming (and most likely very highly anticipated) releases are slated to drop throughout 2022.

“It is a vision come true to work with Gap and Demna, the creative director of Balenciaga, to make incredible product available to everyone at all times,” West, who now goes by Ye, told Vogue upon the official announcement in January.

Ye and Demna’s friendship and creative partnership goes all the way back to 2014, when he first discovered the Georgian designer as one of the founders behind the just-debuted-brand Vetements. According to Complex, Ye tapped Demna to help design Yeezy Season 1 in 2015, and by 2016, Demna presented his debut collection as creative director of Balenciaga. Though, Ye had already taken to Twitter with plans to poach the designer. “I’m going to steal Demna from Balenciaga,” he wrote in February of that year.

In an interview with Vanity Fair back in 2015, Ye was even sharing his vision to revamp Gap with Demna: “I sent [Vetements designer Demna Gvasalia] a text right before showing him one of the looks that Joe Mckenna did. And I just told him, this is my romance with the Gap. I picture the Gap in some way different than I think the rest of people picture it.”

Now, seven years later, Yeezy Gap Engineered By Balenciaga has finally been manifested. Ahead, we break down what to expect from the upcoming “creative exploration” through 2022.

What is Yeezy Gap Engineered By Balenciaga?

According to the announcement’s official release, Yeezy Gap Engineered By Balenciaga “continues Ye’s commitment to bringing creativity to the forefront and delivering his vision of utilitarian design for all.”

Back in early August 2021, we got our first glimpse of an “Engineered By Balenciaga” collection upon the release of Ye’s tenth studio album Donda. The debut listening event at Atlanta’s Mercedes-Benz Stadium was creative directed by Demna, along with designed merch that reportedly made $7 million in sales that night. More Balenciaga-made merch was also released by the end of that month, priced between $60 and $200, and featuring long-sleeve graphic tees, caps, and fully-covered face masks, which was Ye’s signature accessory while promoting the album.

In December, the rapper also hosted a Free Larry Hoover Benefit Concert with Drake, marking the end of the two artists’ longtime feud. The major event, which aimed to raise awareness towards criminal justice reform efforts, included limited-edition merch by Ye and Demna, such as hoodies (similar to Yeezy Gap’s previous release), T-shirts, jumpsuits, baseball tees, caps, and repurposed vintage jeans, ranging in price from $60 to $400.

“There are very few people that I know, especially of Ye’s caliber, who really understand my work so well,” said Demna in an interview with Vogue. “He makes me come out of my comfort zone and be a better designer. There’s no ego when we collaborate, just a mutual drive to evolve and do something great and new.”

When and where can I buy Yeezy Gap Engineered By Balenciaga?

Vogue first reported that the first drop of Yeezy Gap Engineered By Balenciaga is expected in June and will be available across the globe, along with a second drop arriving later in 2022. Additional Yeezy Gap releases will continue throughout the year, as well.

But it looks like Ye and Demna are ahead of schedule, as they released a debut collection on Wednesday, Feb. 23, to coincide with Ye’s new album release Donda 2. The eight styles, which range in price from $120 for a logo tee to $440 for a padded denim jacket, are available to purchase on Yeezy Gap’s website and Farfetch. Alongside the surprise drop, Yeezy Gap Engineered By Balenciaga always revealed a slew of lookbook imagery, featuring a mostly all-black wardrobe of puffer jackets, denim, hoodies, tops, and more.

On Sunday, May 8, Ye dropped a new music video for his latest single “Life Of The Party,” featuring a slew of the artist’s childhood photographs that were edited to showcase pieces from Yeezy Gap Engineered By Balenciaga. The video release coincides with the collaboration’s first-ever television commercial, which debuted on Fox during an episode of Family Guy.

The next Yeezy Gap Engineered By Balenciaga drop was originally slated for Wednesday, May 25, 9 a.m. EST, but is now postponed following the devastating and deadly shooting at a Texas elementary school on Tuesday afternoon.

“In light of the tragedy in Uvalde, Texas, we are postponing the Yeezy Gap Engineered by Balenciaga launch until Friday, May 27. As we pause, our hearts go out to the families and communities impacted,” noted the brand in an official statement, which was released on Wednesday morning.

Is Yeezy Gap Engineered By Balenciaga available at Gap stores?

Yeezy Gap will be available at Gap stores for the first time ever, which was announced on its newly-revealed Instagram account on Wednesday evening, July 20. The first location to offer the line will be Gap’s New York flagship in Times Square starting on July 21 and entryways into the Gap stores will also be redesigned to capture the vision and aesthetic of the Yeezy Gap brand.

Starting Saturday, July 23, a total of 45 select Gap store locations across the U.S. will be offering the Yeezy Gap collection. According to early photos from its first in-store drop, every location will feature large bags that hold all of the line’s inventory for customers to sift through and shop.

What is the Yeezy Gap Engineered By Balenciaga video game?

In addition to its in-store release, Yeezy Gap also debuted its first-ever video game, designed by Balenciaga’s Demna and available now to play on the brand’s website. The digital concept allows users to dress up their avatars with pieces from the line’s debut collection.

This article was originally published on Jan. 7, 2022