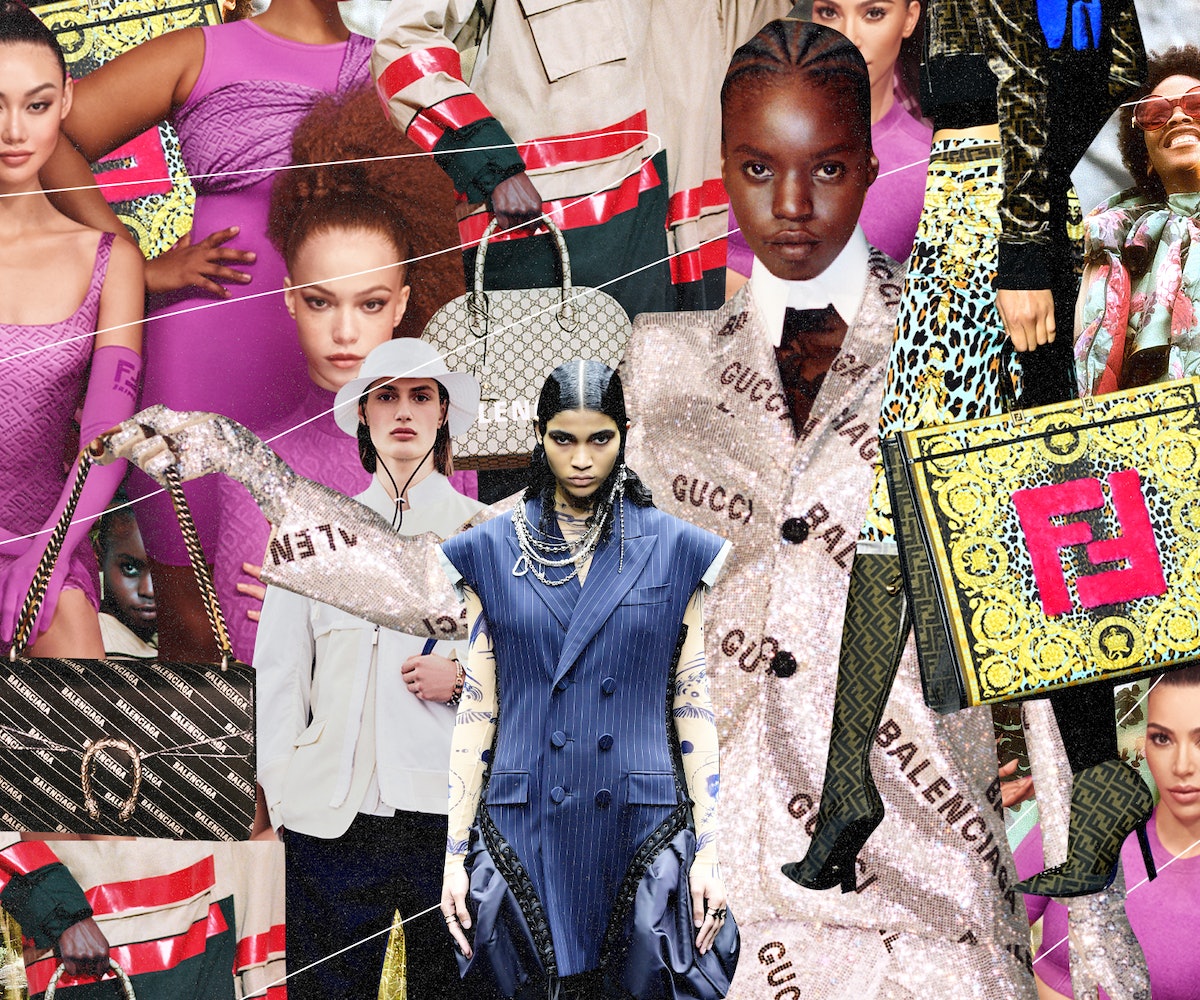 Here’s an end-of-year riddle or pop-quiz question for you: When is Balenciaga not Balenciaga? When it’s Balenciaga x Gucci, aka “The Hacker Project.” And when is Versace not Versace? When it’s Versace x Fendi, aka “The Swap.” There’s also Fendi x Skims, recently revealed between the Italian fashion house and Kim Kardashian’s shapewear brand; and if that’s not enough, there’s been Gucci x The North Face, Dior x Sacai, and Sacai x Jean Paul Gaultier, and more.

If there’s one thing you can say about 2021, it’s that the peak fashion collaboration has reigned supreme.

“In very simple terms, it means that brands and companies that normally compete for the same consumer, at the same level of the market, join forces to create something special together,” says Sara Maggioni, WGSN’s head of womenswear.

In this instance, it’s a cross-pollination of mega-brands for collections with a subversive take on what was traditionally a high-low fashion equation.

Notably, “power collaborations” were among the key takeaways on Lyst’s Year in Fashion report for 2021. It noted that when The North Face x Gucci collaboration was revealed in January, there were over 30,000 searches for it in just 24 hours, with its canvas bomber jacket being the top women’s product of this year’s Lyst Index Q1 report.

Meanwhile, when Gucci debuted its Aria collection in April, in the two months after it was shown there were over 5,000 daily searches for Alessandro Michele’s Balenciaga “hack” in which silhouettes and motifs had been, according to the brand, “quoted” from Demna’s Balenciaga.

Because no longer are they simply “collaborations.” They are “swaps,” “hacks,” “hijacks,” “contaminations,” or insert your synonym here; it’s a rebrand or name change altogether in “Fendace”; it’s logos and slogans, prints and shapes switching in and out in a blurring of fashion lines that used to be sacred and closely guarded.

Maggioni puts it down to the impact of the pandemic, which “has really highlighted the importance, as well as the desire, of being together, of joining forces and working collaboratively.” It’s something she also thinks also resonates with the consumer’s mindset right now.

And, rather than jump to the immediate conclusion of these being just another marketing ploy, she thinks we should “focus on the potential that these sort of partnerships can create: The fact that even luxury giants, even rival conglomerates, are open to collaborate, is extremely positive because it extends to things like finding solutions for scalable sustainable options, fast-tracking new technologies and systems.” For her: “The idea of collaborating with your competitor is certainly a very strong, headline-grabbing message.”

Darcey Jupp, an associate apparel analyst at GlobalData, a market research company, says that when Gucci and Balenciaga collaborated, “a lot of people didn’t expect that [from] such huge brands.” Though both are part of the parent company Kering, it was, she thought, unexpected “and I think that provided a lot of excitement.”

Jupp also pinpoints “the introduction of Kim Jones [creative director of Fendi, as well as Dior Homme] into the fashion industry as one of the leading players” is key in this new teaming-up template and creating a catalyst for supersonic collaborations.

It was, after all, he, while at Louis Vuitton men’s in 2017, who teamed up with Supreme in one of the biggest collaborations of the year. At the time, it was a total surprise and a genius move. At Dior, he’s already enlisted Ambush and Matthew Williams of Alyx.

But even before that, there had been a bubbling up of other high-profile partnerships in fashion, back in the days when we still referred to them simply as collaborations. There was Vetements in 2016 — at the time still headed up by Balenciaga’s Demna, who now goes by only his first name — that did an entire collection of link-ups, each look with a different brand, from Carhartt and Champion to Manolo Blahnik.

And since, there has been Raf Simons joining forces with Prada to be co-creative director; there has also been Burberry x Vivienne Westwood; Christian Lacroix x Dries Van Noten; and Moncler established its Genius Project, cleverly rebranding the idea of a collaboration, in 2018.

“The way we approach collections is always about evolution over revolution,” says the designer Matthew Williams of his involvement with Moncler for his label with 1017 ALYX 9SM. “Evolving the shapes, silhouettes, and texture, like developing the vocabulary of the collection season on season.” This latest one will be his third collection with the luxury puffer jacket brand, and he says there is an introduction of new shapes “and exploring the connections between the world of Moncler and the one of 1017 ALYX 9SM.”

Hideaki Yoshihara and Yukiko Ode from the cult Japanese brand Hyke have been part of Moncler’s Genius Project since 2019, and have also collaborated with The North Face. They note: “For the past few decades, many designer brands were choosing to collaborate with streetwear, contemporary, or sportswear companies to incorporate specialized technology and techniques to their collections and bring a new facet to their designs. As more designers have these types of collaborations the products may be good but sometimes the end result may not feel as unique and fresh.”

Cue the switch-up we’re experiencing. Because of late, there was a distinct feeling of an oversaturation in the collaborations marketplace — generally speaking, it was one that leaned towards the high-low combinations. Because 15 years ago, they felt new and exciting, providing access to big names. Perhaps social media has changed that.

But where it’s obvious in a high-low collaboration who benefits and why, when you go higher up the fashion food chain to a consumer, it may become a little more confusing. It begs the question: Is it just a new press stunt to create hype? Maybe not.

“Pricing is so important for luxury fashion,” says Jupp. “With their high price points, it’s exclusivity and it represents craftsmanship.” To bring that down to high street level, she says, means reducing the cost “which usually means reducing the quality and I think a lot of luxury fashion doesn’t want to do that because it will damage their brand’s identity.” But if you team up with someone on the same level, this doesn’t happen.

So where next? Will there be a Chanel x Celine? A Dolce & Gabbana x Prada? Who knows, but Jupp thinks that the metaverse and NFTs will increasingly become the focal point of further collaboration in the future and that creative director Jones is still one to keep an eye on.

Meanwhile, for designers, the idea of collaborating, whether they decide to call it that or not, seems to never not pose an interesting challenge or creative opportunity, just as long as it’s the right one.

“I think collaborations can bring a certain energy,” says Sacai’s Chitose Abe. “I only take on collaborations with brands that truly resonate with me and the balance between Sacai and the partner is important. It has less to do with our visual aesthetic but more about a connection between the two brands.”