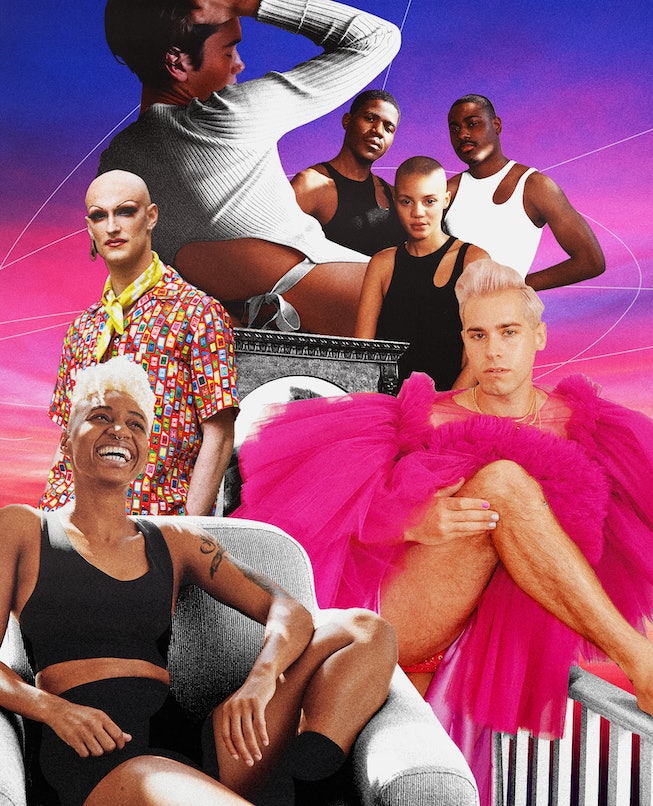 It’s no secret that the fashion industry and the LGBTQ+ community continue to dance to the same beat. Many of the industry’s greatest moments, such as an introduction of a new silhouette or the creation of a groundbreaking fabric, were pioneered by queer designers. Halston’s signature Ultrasuede was admired by the fashion crowd at large, just as much as his fun-loving spirit at Studio 54. Even before he was crowned the winner of the 2019 CFDA awards, Christopher John Rogers offered a glimpse into the vibrant and inclusive world of fashion’s future, and as a queer woman, up-and-coming designer Hana Holquist continues to reject the male gaze with her high-femme-inspired design process.

As the fashion world seemingly reinvents itself after the past year and a half, there’s a new generation of queer brands making an impact of their own. Whether it be through fantastical expression or inclusive undergarments, these emerging designers seemingly have one mission in mind: fashion for the LGBTQ+ community, by the LGBTQ+ community. Read on to learn more about the ones that are on our radar now.

Can menswear be more than straight lines and structured suits? Designer Fang Guo definitely thinks so. His new knitwear brand, FANG, which just launched in April, is putting a twist on menswear by injecting hints of romance throughout his collections. Think pussy bows and asymmetrical tops that add sensuality to a traditionally conservative garment. “So what if you are a 6’4” masculine guy who wants to wear these romantic and whimsical pieces?” Guo tells NYLON. “Everyone has the right to feel how they feel and dress how they want to dress. It doesn’t define their entire being.”

So long are the days when the tank top is limited to a spaghetti-strap style. Based in New York City, Kingsley Gbadegesin’s namesake brand breathes new life into the basic staple through reimagined silhouettes. His creations are sexier, modern, and artistic, which can easily be seen in the signature “Race Her” ribbed halter top with its asymmetrical hem and “Romain” ribbed tank’s cut-out details. And, like all great designers, aesthetics aren’t the only thing that drives Gbadegesin’s brand. Being a first-generation Nigerian-American, the designer says he aims to “contribute to building a country, culture, and future that uplifts and does justice to the people that build the United States.”

Otherworldly proportions meet couture-like attention at the hands of Aaron Potts. With his label APOTTS, gender binaries in fashion cease to exist. Instead, the New York-based designer has been channeling escapism and “everyday editorial vibes” since 2018. From large denim pants to cocoon-shaped coats, it’s as if APOTTS is asking its wearers to dig deeper than just putting fabrics on a body. “APOTTS is focused on embracing creativity, diversity, and practicality in breaking down social barriers,” says Potts. “I hope that people wearing my designs do so as an expression of embracing their truest, most creative, most realized self.”

While self-expression through fashion may be reserved for just clothing, Urbody is paying attention to the foundation of getting dressed: underwear. Founded by Mere Abrams and Anna Graham, the duo realized undergarments for trans, non-binary, and gender non-conforming individuals were extremely rare and sought to fill in the gap. “Feeling good about who you are and being present is core to self-expression and mental health,” Abrams tells NYLON. “Urbody set out to create a collection of undergarments that facilitate a positive relationship with one’s body and identity, turning moments of what was once dysphoria, into opportunities for daily euphoria.”

The classic waistcoat gets an edgy makeover, thanks to Ella Boucht. The London-based Finnish designer’s eponymous line celebrates butch identity while tapping novel ways of thinking about beauty and gender expression. Feeling like you want to wear vibrant colors? Try a waistcoat with a print. Feeling kinky? Try one with a harness. Whether you’re interested in a new take on tailoring or looking to redefine gender norms, Boucht’s pieces are evidently a closet must-have.

Savannah, Georgia’s Troy Dylan Allen and his larger-than-life clothing brand is no stranger to making a loud, fabulous statement. Filled with frills and tulle, from sequined panties to the Instagram-ready (and fashion editorial favorite) “Shamedaisy Dress,” Allen’s creations boast a queer agenda that is loud and proud. “This brand acts as a means to take up space and to be larger than life,” the designer tells NYLON. “I hope queer people feel and experience this full fantasy, but also are reminded of when they first saw a queer person fully embrace their queerness.”

The Brooklyn-based Homoco merges a love for the summertime and swimsuits with the importance of giving back in several different ways, including collaborating with a queer artist or donating towards organizations that champion queer rights. “We at Homoco like to have fun,” says founder Daniel DuGoff. “But we also believe in more intentions behind the scenes. We build responsibility into each product, using sustainable materials and small runs of products, working with queer artists, and giving back to foundations.”