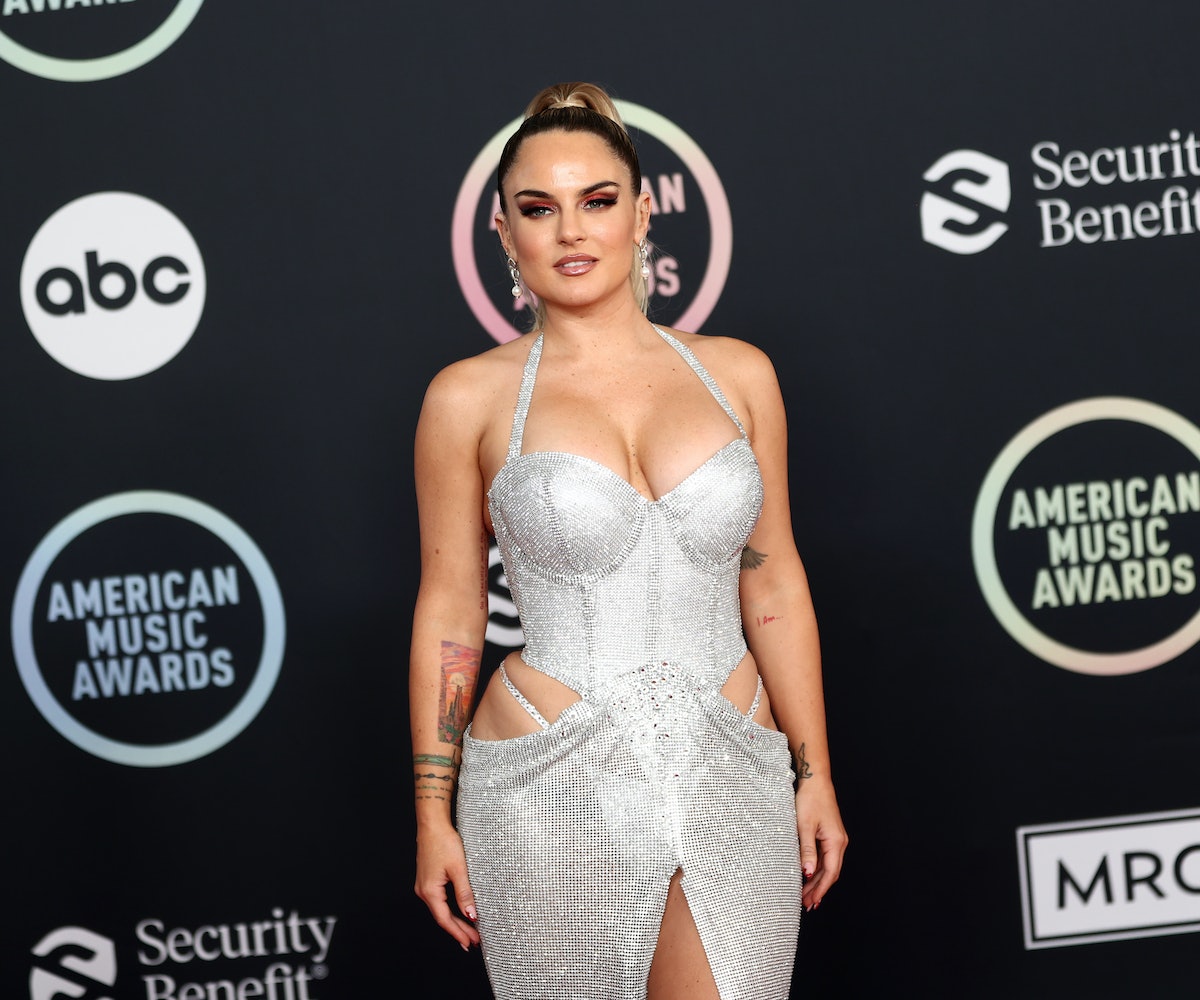 On Sunday, Nov. 21, the 2021 American Music Awards, or AMAs, took place in Los Angeles honoring many of the biggest names in music, from the ceremony’s host Cardi B to Olivia Rodrigo, BTS, Doja Cat, Megan Thee Stallion, Lil Nas X, and more, along with must-see performances from Chlöe and Måneskin. Among the star-studded event was singer-songwriter JoJo, who attended her first AMAs since 2004 when her hit song “Leave (Get Out)” was released at just 13 years old. At the height of her career, the Foxborough, Massachusetts-born singer was known for her powerful R&B vocals, and she still remains the youngest female solo artist in history to ever top the Billboard Pop Songs charts.

But more than a decade after her early career success, the early-aughts singer felt that her career took a “back seat,” telling NYLON in April 2020, “I did feel like I had to remake a case for myself, and reestablish who I am, and essentially say, ‘This is me. Do you love me still?’ It was a vulnerable thing.”

In September 2021, the singer also posted a TikTok video, where she addressed the fact that she hasn’t been invited to any recent award shows, along with caption saying, “I never talk about sh*t like this nor do I think I deserve anything over anyone else — but I think I’ve lost any tiny bit of chill I have remaining.” Months later, the now 30-year-old songstress reflected on her viral video. “To be honest I was feeling sad, sensitive, and I didn’t think much about it,” she tells NYLON. “I’m proud of the music I’ve been making and like anyone else, I want to be included and acknowledged.”

For the 2021 AMAs, JoJo hosted the non-televised awards for TikTok’s livestream on the red carpet alongside Billboard host Tetris Kelly and The Hollywood Reporter’s Tiffany Taylor. Styled by Anna Katsanis and Justine Logue, JoJo went for the epitome of Hollywood glam with an on-trend update, wearing a dazzling cutout dress from LA-based designer Usama Ishtay, along with jewels from Spanish brand UNOde50 and sparkly heels from Christian Louboutin.

“Well, I knew two things: I wanted to spaaaaahkle and serve up some body,” the Good To Know singer says about the inspiration behind her look. “So my stylist and I collaborated with designer Usama Ishtay to create this custom dress. I don’t typically get this glam on the red carpet, so I was excited to go all out with my crew.”

Check out more from JoJo as she took us behind the scenes on the red carpet and shares her experience getting ready for the 2021 AMAs, ahead.

“My hairstylist, John Lunsford, and his gorgeous manicure putting the finishing touches on my bouncy pony.”
“Camille Thompson putting finishing touches on my face while John damn near gives me a facelift with how tight this ponytail is. 🤣”
“My nails, by Michelle Won, inspired the rest of the glam tonight. We went with a deep red and metals.”
“My original shoe broke on my way out the door! Thankfully, I’ve had these studded silver Louboutins in my closet for years and they ended up coming in CLUTCH today. (P.S. Walking in this chain-mail dress was a whole ordeal and I definitely had a speed limit.)”
“Just a couple millennials trying to learn the most popular TikTok dances of the year.”Photos by Reinaldo Irizarry

When you heard you were invited to attend the AMAs this year, what was your initial reaction?

My inclination is to not go places unless there’s a reason for me being there, so when I got the opportunity to host red carpet coverage for TikTok, I got excited! It made me feel like I wasn’t just going to be going “to be seen,” which tends to make my imposter syndrome flare up. Actually getting to be a part of the behind-the-scenes and actual awards was fun and purpose-driven.

Who were you most excited to see at the AMAs?

My girls Chlöe Bailey and Mickey Guyton! Also, the legends from Boston who inspired all of us Massachusetts kids: New Edition and New Kids on the Block. And Silk Sonic. Ooh, and BTS!

What is your getting-ready routine like? Do you have any special rituals or positive affirmations that you’ve been doing recently to prep before big events?

I keep it pretty simple: listening to my favorite music, drinking lots of coffee, slapping layers of moisturizer on my face and body, and taking all my vitamins and supplements. Before I walk a carpet or start doing interviews, I say a prayer, express gratitude, and take some deep breaths.

It’s been a while since you’ve attended an award show, but do you have a favorite memory from these types of events?

This is my first award show since the pandemic, I believe! My favorite memory is walking the 2020 Grammy red carpet — my first time at the Grammys when PJ Morton and I won “R&B Song of the Year.” He’s one of my best friends in the industry and it was so special to share that moment together.

What can fans expect next from you in terms of music and performing?

2022 is when I’m hitting the road and I’m so ready! There are currently 45 dates and counting. These will be my best, biggest shows to date, and I’m so grateful for the opportunity to perform all my music from over the years, new and old. I’m having so much fun putting the set list together. After the tour, I’ll probably want to get in the studio and work on new music, but who knows. I’m getting back into acting, too, which I’m excited about.

“Seeing if we mouthed along with the words right to the TikTok we just made.”
“Quick prayer before going live.”
“Using whiteboards to play an AMAs trivia game.”
“Giving a little classic glamour, a little exotic dancer, and a lot of shine.”
“Before everyone else arrives on the red carpet, I managed to sneak a few pics.”
“So fun hosting and presenting the TikTok AMAs non-televised awards with these two!”
“My longtime friend and priceless member of my team, Reinaldo Irizarry, was my date to the AMAs! Hope his handsome fiancée doesn’t mind that I borrowed him! Look how we coordinated tho ☺️”
“Got my LIIIIIFE cheering on my hometown icons: New Edition and New Kids on the Block!!!”Photos by Reinaldo Irizarry
NEXT UP
Culture
The Cutest Couples At The 2023 Grammys
Culture
Caroline Polachek In KNWLS & More Party Photos You Missed
Fashion
Olivia Rodrigo Wore A Sheer Slip Dress To The 2023 Grammys
fashion
All Of The Sexy, Sparkly Outfits From The 2023 Grammys Afterparty
Style + Culture, delivered straight to your inbox.