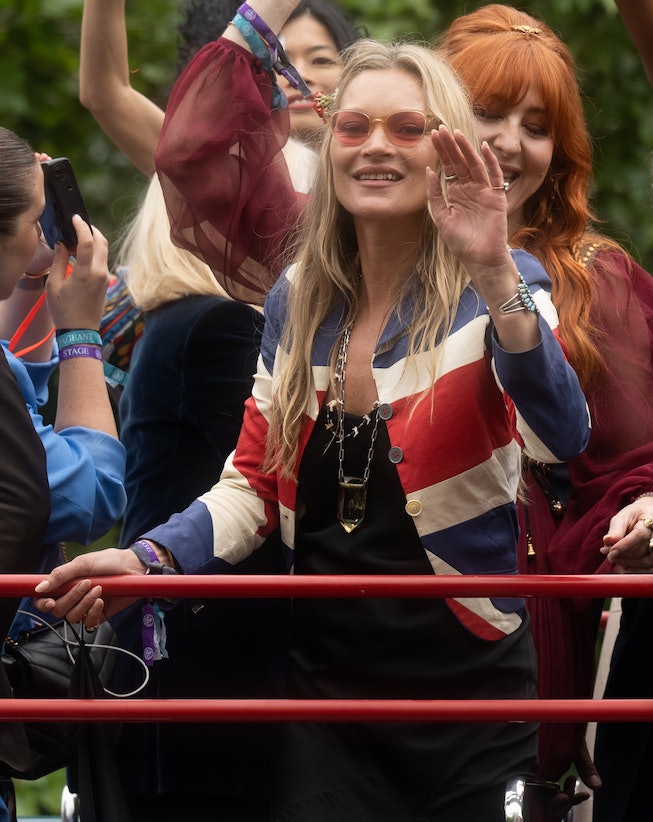 Formal ceremonies, parties, concerts, and more happened across the pond all weekend long to honor Queen Elizabeth II’s 70 years of royal service, and the biggest celebration happened on Sunday, June 5, at Buckingham Palace. The major event, known as the Platinum Jubilee Pageant, included celebrity appearances from the likes of supermodel Kate Moss, who joined a parade of double-decker buses that made their way through London.

Moss’ outfit was a tribute to her British roots and a sartorial shout-out to her ‘90s runway days, as well, as her vintage Union Jack blazer is actually what she wore on the catwalk for John Galliano’s Spring 1993 show. Titled “Olivia the Filibuster,” the collection’s easily recognizable flag motif was incorporated into a number of looks, including on Moss, which was paired with a baby blue sheer maxi skirt. Fast-forward three decades later, and Moss wore her Union Jack blazer with a black slip gown, red heels, and layered jewelry. A timeless throwback, indeed.

Ahead, check out the rest of our favorite celebrity looks from the past week, including Cardi B’s Pride catsuit, Bella Hadid’s bike shorts, Kristen Stewart’s Chanel sequin look, and more.

Out and about in New York City, Bella Hadid wore an athleisure-leaning outfit, including an oversized colorful cardigan, Nike Bike shorts, and Salomon sneakers.

At the New York premiere of her new film Crimes of the Future, Kristen Stewart wore a sequined jumpsuit from Chanel.

Dixie D’Amelio wore a baggy look from Amiri to celebrate her Flaunt Magazine cover at the Los Angeles-based brand’s boutique.

Emma Roberts attended the store opening party for By Far in Los Angeles wearing a leopard-print blouse, flared jeans, and By Far accessories.

Selena Gomez made an appearance at the “Giving Back Generation” event in Los Angeles wearing an Anine Bing blazer with a white tee, jeans, and black heels.