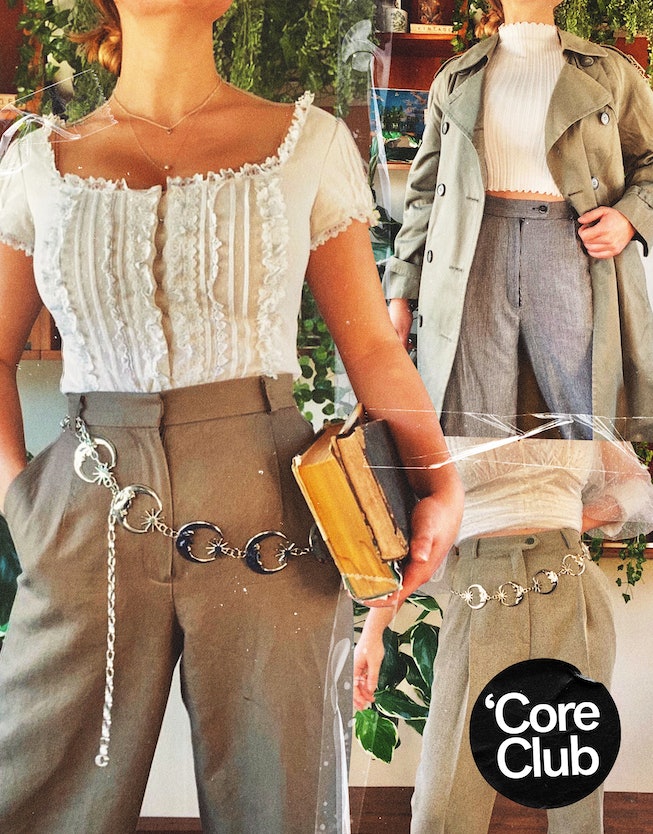 Images Courtesy of Thrifting Is For Cool Kids

Whether it's a fashion trend on TikTok or a certain style taking over Instagram, internet aesthetics are always changing online. Our series 'Core Club breaks down the looks that you're starting to see a lot on social media and highlights the people and brands channeling it best. Next up: light academia.

Much like every fashion trend cycle, one style will eventually inspire an equal and opposite reaction or look. In the case of dark academia, its inevitable internet aesthetic opposite is slowly on the rise: Meet light academia, a bright and lighthearted rival to its moody, goth-leaning counterpart.

Dark academia, according to The New York Times, took off as a TikTok subculture last year when the global pandemic forced schools to pivot online. The academia lifestyle of reading and learning turned aspirational once libraries and campuses were off-limits and classrooms turned into ubiquitous Zoom grids. A particular fashion aesthetic followed, inspired by Ivy-style garments, like tailored trousers, blazers, and cozy cardigans in inky hues.

Meanwhile, YouTuber Liz Ruth, who did a deep dive on the differences between the two internet aesthetics in a video that she posted in October, says light academia “does paint the picture of this more calm, softer energy, compared to dark academia, which is darker and more chaotic.” And while the style inspiration between both are rooted in the joy of learning, the differences between their fashion choices boil down to color palette (beige versus black) and fabric (lightweight versus cozy). “[Light academia] is almost like a bridge between cottagecore and dark academia,” adds Liz Ruth.

Liz Ruth believes that interest in light academia “is on its way up,” and she’s not wrong. At the end of 2020, it took the number-seven spot for Tumblr’s top 10 aesthetics; dark academia was in second place behind, naturally, cottagecore in first.

“With 48 percent of our active users being Gen Z, we saw overall engagement increase around light academia timed to back-to-school in September,” Amanda Brennan, Tumblr’s trend expert and meme librarian, tells NYLON, noting that overall engagement spiked 117 percent during the second week of that month.

“Light academia is an aesthetic that focuses on the softer and gentler side of dark academia,” continues Brennan. “It still embodies the love of learning, but with an airier, less doom-focused feel that shows that knowledge brings light and happiness in the outdoors rather than a gothic darkness seen curled up in a corner.”

Brennan also believes that both aesthetics share a foundation in cottagecore, a style with which Depop seller Faith, who runs Thrifting Is For Cool Kids, identifies. “My Depop shop is my style, which is cottagecore and academia,” she says. “That’s one of the main things that has helped me so much because I sell pieces that I would wear, and it attracts people of the same crowd who enjoy the same fashion sense.”

Faith started selling online at the start of the global pandemic. In a little less than a year, she’s garnered 13K followers on Depop, became a verified seller, and has made more than 750 sales. She announces special product drops on social media, grouping them together by style and promoting them for certain aesthetics: a pastel fairy drop, an all-blue oceans drop, and a neutral nature drop. “Calling all dark and light academia lovers,” she wrote on Instagram for the latter. “This one’s for you.”

Faith has noticed that her light academia-style pieces sell quickly and expects more demand as the weather gets warmer. On Depop, searches for light academia started to pop in June of last year and went up by nearly 900 percent by October. For comparison, searches for dark academia on the online marketplace jumped more than 500 percent between June and December. Plus, with Gen Z looking to Pinterest for outfit ideas, searches for “light academia” from pinners were also up on the visual platform, specifically 236 times greater in December compared to the year prior.

While dark academia stemmed from being indoors, light academia could very well become the final sartorial result once we're able to truly, safely be out in the world. Although a vaccine for COVID doesn't mean the pandemic has come to an end, it still gives us hope for a daily routine that would actually involve going to class or work IRL. This type of wishful thinking hasn't stopped academia fans from preparing their public-facing wardrobe.

“As we all look towards a COVID-free future, families are looking forward to sending their children back to school full-time, dressing up to go into the office or out to restaurants, and leaving the homes they’ve invested and hibernated in for the past year,” says Larkin Brown, Pinterest’s user researcher and in-house stylist. “Looking forward to a lighter world is contributing to the rising trend of light academia.”

NEXT UP
Fashion
Cybercore Is The Next Tech-Inspired, Y2K Fashion Aesthetic Trend
Fashion
From Coastal Grandma To Indie Sleaze, What’s Your Summer Aesthetic?
Fashion
The Popcorn Top Is The Latest Y2K Trend Making A Comeback
Fashion
How To Wear 2022’s Biggest Denim Trends, According To A Stylist