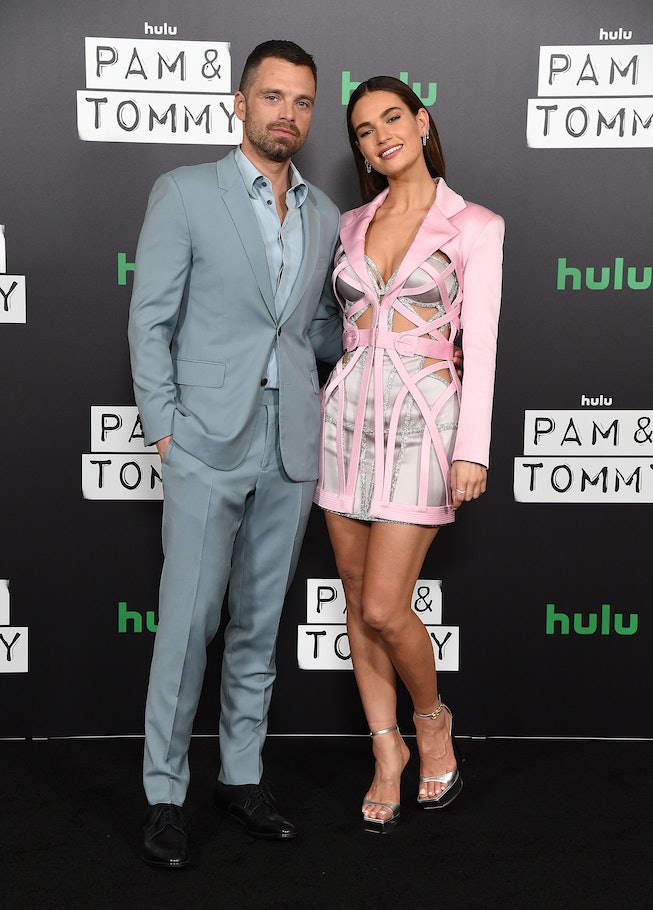 With the premiere of Hulu’s highly-anticipated biopic Pam & Tommy right around the corner, the star of the show, Lily James, is kicking off her promo press tour with plenty of fashion, and her latest look might have channeled her inner Pamela Anderson.

On Tuesday, Jan. 25, the upcoming series kicked off its tour in Los Angeles with a photocall featuring the cast. Styled by Rebecca Corbin-Murray, James was dressed in Atelier Versace featuring a whole lot of cutouts, from her silver metallic mini dress that bared her midriff to the intricately-designed, bubble-gum pink blazer, which also featured cutouts along the bodice. With each piece layered together, the whole look gave off a trippy optical illusion. She then paired her look with dainty silver earrings by Anita Ko and platform metallic heels. James’ bombshell ensemble just so happened to complement her co-star’s Sebastian Stan suited ‘fit, who opted for a gray and blue look with black leather shoes.

James plays Baywatch star Anderson in Hulu’s Pam & Tommy, an eight-part limited series that’s set to premiere on Wednesday, Feb. 2. Based on the true story of Anderson and her then-husband Tommy Lee (played by Stan), the show uncovers the couple's tumultuous relationship and the leak of their honeymoon sex tape in 1997. Joining alongside James and Stan are Seth Rogen as Rand Gauthier and the show’s producer, Nick Offerman, Taylor Schilling, Andrew Dice Clay, Pepi Sonuga, Spencer Granese, and Mozhan Marnò.

While we wait for the Pam & Tommy to premiere on Hulu, check out Lily James’ photocall outfit from Versace in more detail, below.