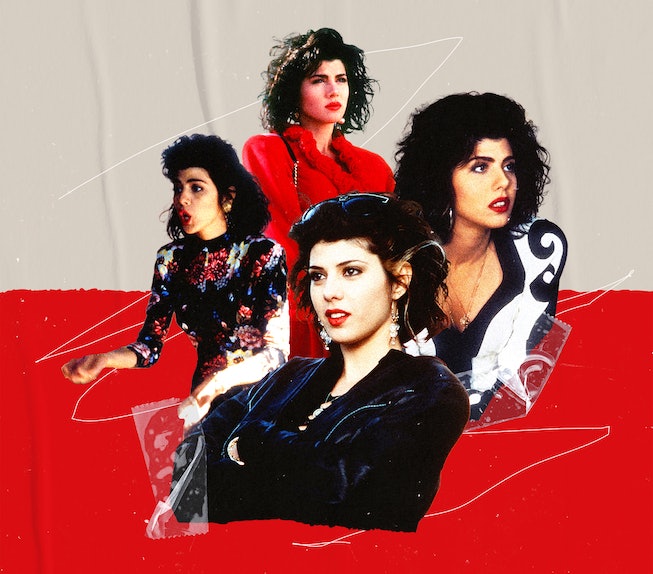 Few garments make quite as much of an impact as a catsuit. The skin-tight one-piece look brings to mind such stylish cool-girl characters as Emma Peel from the classic ‘60s TV show The Avengers and, of course, the many on-screen interpretations of Catwoman. In 1992, a new catsuit entered the canon. Mona Lisa Vito, the delightfully sassy fiancée of the title character in My Cousin Vinny, wears a catsuit whose impact is still felt as the beloved fish-out-of-water comedy celebrates its 30th anniversary.

Marisa Tomei’s performance as Mona Lisa won her an Oscar for Best Supporting Actress, which she accepted while wearing a white gown with black piping, paired unexpectedly with long, glamorous black gloves, and cemented her status as a fashionable “It” girl. Her famous catsuit in the film features an ornate floral pattern that pops against a black background. It has a mock turtleneck and, crucially, a large cutout on the back. The sexy silhouette is made all the more potent by its unexpected, extremely early-‘90s print.

Catsuits are sleek, frequently rendered in fetishistic black latex. The garment is typically a solid color, because the one-piece’s shape alone already makes enough of a statement. Their sex appeal comes in large part from how difficult they are to pull off (figuratively, and, perhaps, literally) and a woman who wears a catsuit instantly conveys a message of cool confidence. Mona Lisa’s catsuit, however, takes it to a new level.

The catsuit, equal parts cottagecore and video vixen, is, like the film itself, a fabulous aesthetic clash. When she’s wearing this outfit, she’s laying into her fiancée and stomping her feet as she complains about the ticking of her biological clock. She’s simultaneously hyper-feminine and aggressive, and the catsuit undeniably enhances her considerable power.

My Cousin Vinny is a study in contrasts — the comic plot centers on the street-smart personal injury lawyer Vinny’s (Joe Pesci) attempt to legally defend his cousin and prove himself, all while in rural Alabama. The costuming (by Carol Wood, who previously worked on films like Mystery Train, Twister, and Drop Dead Fred, and, surprisingly, left the industry after Vinny) beautifully complements Pesci and Tomei’s brash performances and goes a long way towards visually establishing them as urban outsiders in a more buttoned-up milieu.

Part of the joy of Mona Lisa’s wardrobe lies in her refusal to engage with traditional dress codes. The courtroom typically demands tailored, unobtrusive looks, and both she and her fast-talking partner own nothing of the sort. Their fashion is of a piece with the trashy yet fabulous looks seen in mob movies and TV shows. It’s easy to imagine Mona Lisa on the vision board for Adriana La Cerva in The Sopranos, and she has some stylish similarities to the well-dressed, no-nonsense women found in Martin Scorsese’s films, as well. Mona Lisa simply does not believe in dressing down. If she’s going to be sitting in court, she’ll be wearing a tight, semi-sheer blue dress or a shoulder-padded, bodycon number that would make Prince proud with its purplish shade and gold-studded detailing.

Many of the popular styles in the early ‘90s still carried with them a touch of ‘80s opulence, and Mona Lisa’s looks embody this transitional period. In a red skirt suit with ruffled details, she recalls a supermodel’s take on an ‘80s businesswoman. When she sticks to a monochrome palette, she’ll still be wearing a cropped leather bomber jacket and big sunglasses or a blazer with swirled accents and a corset-like shape. She’s the rare character whose courtroom looks are ready for the runway.

While her style is very much of the time, her bodycon silhouettes and coordinated sets all feel like an extension of an unapologetic attitude that’s still relevant today. Mona Lisa’s wardrobe is always doing the most, and her looks remain enviably bold yet charmingly playful touchstones.