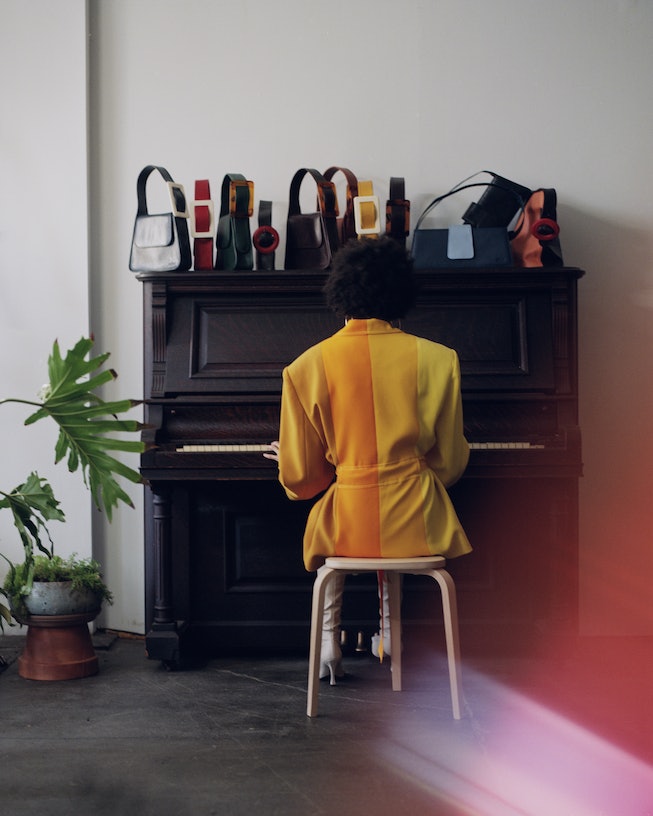 Brooklyn-based designer Sade Mims is currently having a breakthrough with her brand, Edas. During a year when the fashion industry has been rethinking its old-school, by-the-book system, Mims found success by simply doing what feels right.

After months of self-reflection, Mims reached out to Cameron Tea, an artist and craftsman from Los Angeles who specializes in beaded designs, on a whim after stumbling upon his Instagram back in May or June. From opposite ends of the country, the two virtually collaborated on a beaded bucket hat, and since its surprise drop in August, the item has become a favorite among the fashion set, appearing in both editorials and campaigns, as well as on Tessa Thompson, who modeled her personally purchased accessory on Instagram back in the fall.

“I was so blown away because, being an artist for me at least, I don't create with the notion of needing validation. But when it comes, you're like, ‘Oh sh*t, people like it. People like what I'm creating,’” says Mims thinking back on the collaboration. “I feel like I'm often in the space of shock and, specifically with the hat, I had never had celebrities buying off my website. I'm like, ‘Wait what? Tessa Thompson actually purchased off the site?’ But I don't get too fazed by it. It’s really interesting to see and I'm excited and grateful for it.”

The last time Mims can recall one of her designs having the same level of excitement was when she first released the Yshaia bag for Edas. After launching the brand in 2013 with a line of jewelry, Mims introduced handbags two years later, garnering attention (and her first retail order) from vintage concept store The Break in Williamsburg. Soon after came the Yshaia in 2018, and the style, which came in a honey yellow or pine green, has been a bestseller ever since.

It’s easy to spot an Edas bag. Its sturdy, sculptural silhouette is often accented with an eye-catching detail — top handles made from metal or a string of beads (an homage to Mims’ jewelry roots) or, as seen on the Yshaia, a contrasting acrylic buckle on the arm strap that Edas fans can easily identify far quicker than any logo placement.

While Mims has sold her bags at both beloved indie boutiques and major retailers like Urban Outfitters, 2020 marks the year her brand has gone truly global. In November, The Folklore, an online retailer that offers brands from Africa and the African diaspora, partnered with Farfetch on a curated shop including Edas, and London-based Selfridges recently picked up the bags in December.

“The Farfetch and The Folklore collaboration was really fun because we got to launch a new iteration of a bag that I really, really cherish and that means a lot to me,” says Mims of the Maria, a sharper version of a baguette bag that’s exclusively available in a two-toned blue. “I was just really humbled and honored to be a part of that.”

While most fashion brands spent the year pivoting towards new shopping demands, such as loungewear, face masks, and even home decor, Mims stuck to what has always done best for Edas. Instead of releasing something entirely new at the end of the 2020, she offered her bestselling styles in new color iterations inspired by her aunts and mother. The Yshaia now comes in navy blue and chocolate brown with more colorways to come, as well as in a mini-sized version. (The popular yellow honey is already sold out, but it gets restocked often.) Plus, in addition to its exclusive colorway with Farfetch, the Maria dropped in a classic black that has already quickly sold out.

“I definitely don't trend forecast,” notes Mims. “I think I do what feels right for me inside, and then if people attract to it, cool. So I'm kind of only tapping into my circle, and the colors that we're doing very much reflect that.”

It also seems like in due time Mims will expand Edas yet again into new categories. After all, she’s always wanted the brand to be a household name. “When we create, we're not just creating accessories, I want to dive into shoes and fragrance and art,” she reveals. Though, she’s not in any rush. “I feel like the pandemic has really allowed me to shift my thinking towards taking one day at a time. And sometimes I may say things one day and that changes the next and I'm OK with that. I've been really content with shifting in this way and not thinking too far out. I just want to keep growing and evolving and learning. That's it.”