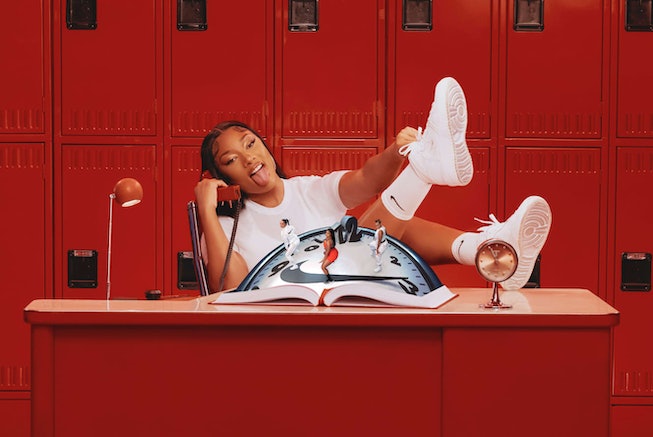 It’s very clear to see that Megan Thee Stallion keeps herself very busy. Currently on tour doing shows across the country, the Houston rapper still has time to front major brand campaigns. From her work with Coach to launching a Revlon collection, she just won’t let up. Now, her latest partnership is with one of the biggest names in fashion and sportswear industry: Nike.

On Thursday, Sept. 23, Nike announced its newest campaign, dubbed “New Hotties,” starring Megan Thee Stallion. Focused on sport, the rapper shares her fitness journey, as well as her relationship to her favorite activity: dance. “Dance was something that stuck with me and sat right in my spirit,” says Megan in an official statement with Nike.

While most would consider dance a sport, there are still others who don’t, especially compared to more traditional practices, like basketball or football. But “New Hotties” is all about introducing yourself to something new and trying it out. “Dance is my sport. Performing is my sport. Rapping is my sport,” says Megan. “And if you think this don’t take no work and no effort and no sweat, you’re wrong.”

While this partnership does come as a bit of a surprise, it’s very fitting as the Hot Girl has been sharing her fitness routine with her fans since the beginning of 2021 with her Hottie Boot Camp series for Instagram TV. When the Nike campaign debuted, the rapper shared a one-minute video to her grid with a caption that read “🔥HOTTIES WE ARE OFFICIALLY NIKE HOTTIES🔥🔥🔥”.

Megan is also launching a series of core and lower body workouts exclusively on the Nike Training Club app. In the videos, you’ll get to see the artist push herself to the limit alongside Nike trainer Tara Nicolas. “I like the fact that Hotties get to see me go through my struggle,” she says. “It’s realistic for you to want to give up. It’s realistic for you to not want to eat this today. It’s just really about discipline.”

This new Nike partnership begs the question: Is a possible sneaker collaboration on the way? While the (Nike-owned) Jordan Brand has recently worked with Billie Eilish, a release from Megan would solidify her as the only Black female rapper to work with Nike. Her industry peers, like Cardi B and Beyoncé, have typically worked with other sneaker brands (Reebok and Adidas, respectively) but never Nike.

Below, you can take a closer look at Megan Thee Stallion as the Hot Girl Coach in her latest Nike campaign. Plus, you can also shop some of the key pieces from her shoot with Nike’s “New Hotties” edit.