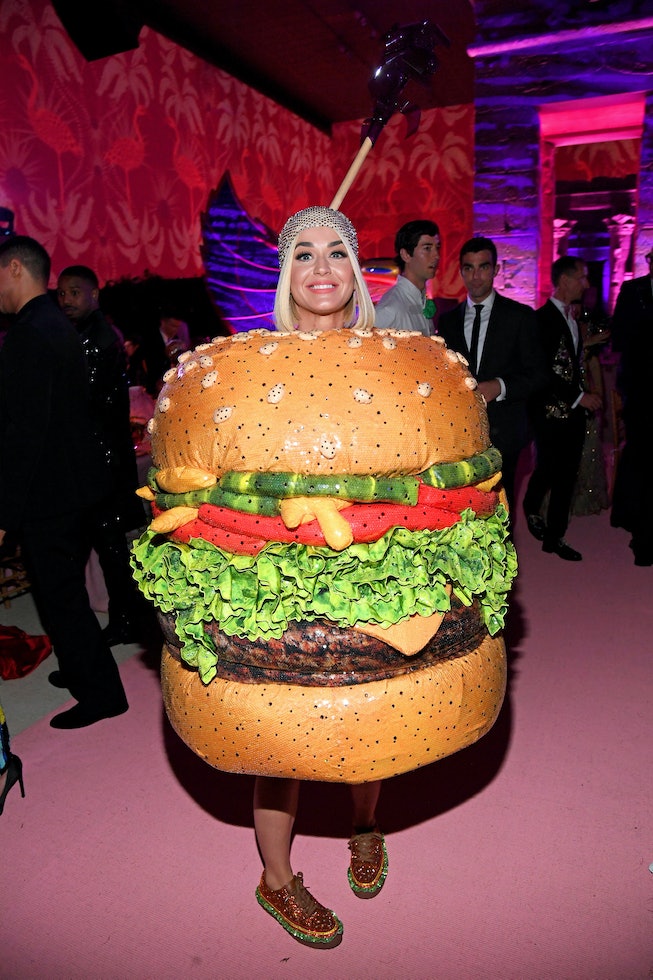 Moschino unveiled its Resort 2022 collection on Tuesday, and Creative Director Jeremy Scott included a few food-inspired runway looks, from an actual hotdog dress (modeled by Stella Maxwell) to a frock resembling melted ice cream with sprinkles, complete with a very literal cone bra. Scott also included some revamped versions of his most recent viral design to date: Katy Perry’s famous burger dress, which she wore to the Met Gala afterparty in 2019.

The meme-worthy look was updated into a skirt for Scott’s newest collection, paired with matching burger earrings and a hoodie with a Moschino Couture burger logo. He also turned it into a skirt suit, accented with lettuce, tomato, and condiments, along with a burger headpiece.

The OG burger dress made a reappearance as well in Moschino’s Resort 2022 fashion film. Inspired by old school Hollywood musicals and filmed on the back lots of Universal Studios, Scott cast Karen Elson as the star of Lightning Strikes: The Moschino Mini-Musical. Elson plays a diner waitress who sings and dances her way through a work day, covering late ‘70s hits like “Everybody Dance” and “Funkytown.”

“I wanted to take the excitement, the glamour, and the whimsy of all the old Hollywood musicals and use them as a vehicle to show this collection,” said Scott in an official statement. “This season, it’s all about song and dance! And few things make me happier than when style and cinema collide.”