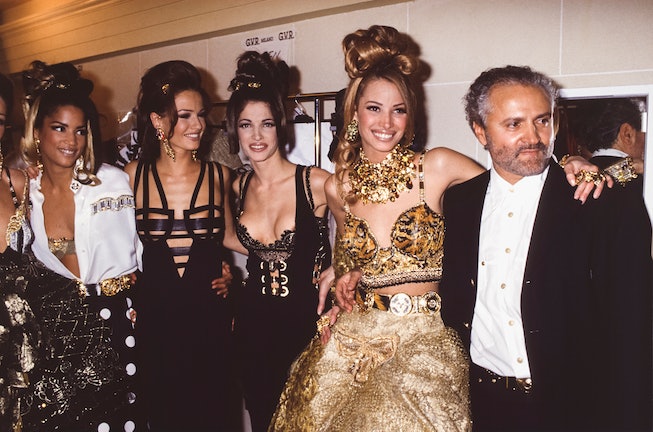 The early-aughts seem to be making their way into today’s highly-esteemed museums in light of the nostalgia wave in fashion, even going back to the early 2000s exhibition held in Brooklyn in 2017. Starting on Wednesday, Jan. 19, 2022, the Museum of FIT is finally presenting a ‘90s-focused fashion exhibit titled Reinvention and Restlessness: Fashion in the Nineties.

Set up by author and curator Colleen Hill, the exhibition highlights iconic brands and designers who established the sartorial codes of a decade that marked both the end of a century and a millennium. With concepts ranging from minimalism to the revitalization of luxury design houses, the Reinvention and Restlessness: Fashion in the Nineties showcases the ‘90s as a time that was also filled with hope for the future and yet fraught with anxiety.

The exhibition will feature eight key trends that helped to define the decade while focusing on themes that stimulated excitement and change. Visitors can expect to view some of the most emblematic fashion pieces and designers from this era, including Vivienne Westwood, Tom Ford by Gucci, and so much more.

“The curator of acclaimed exhibitions like Fairy Tale Fashion, Colleen Hill has outdone herself with this brilliant and timely exhibition on the fashions of the 1990s, which have come back into vogue for a new generation,” said the Museum of FIT’s Director and Chief Curator Valerie Steele in an official statement.

If you’re planning on visiting the upcoming exhibition, we’ve got you covered. We compiled everything you need to know about Reinvention and Restlessness: Fashion in the Nineties at The Museum at FIT in New York City, including what to expect and more, ahead.

What is the Reinvention and Restlessness: Fashion in the Nineties exhibit?

Curated by FIT’s Colleen Hill, Reinvention and Restlessness: Fashion in the Nineties will feature eight trends that helped define the 1990s, with the term “restlessness” characterizing some of the exhibit’s themes, like “retro revivals, technology, environmentalism and reuse, and the global wardrobe.”

The exhibit’s introductory gallery will highlight the connections between fashion and pop culture, from fashion’s increasing presence on television to the ever-growing fame of supermodels during that time. Visitors will be able to see videos of ‘90s-era runway shows and clips from such movies and shows as Clueless (1995) and Sex and the City (1998) throughout the presentation.

The main gallery will feature more than 85 garments and accessories that undoubtedly shaped ‘90s style, with most of the items selected from the Museum of FIT’s permanent collection. Some characteristics from this decade will include themes like retro revivals, minimalism, grunge, deconstruction and the avant-garde, and the revival of luxury. There will also be a section that explores globalization, technology, and environmentalism in ‘90s fashion.

The exhibition is also accompanied by a book of the same title that was written by Hill and will be available for purchase at major book retailers.

What is on display at the Reinvention and Restlessness: Fashion in the Nineties exhibit?

Many of today’s established designers, along with some of the world’s best-known fashion houses, including Tom Ford at Gucci and Alexander McQueen at Givenchy, will be featured at the Reinvention and Restlessness: Fashion in the Nineties exhibition. The works of John Galliano, Vivienne Westwood, and Jean-Paul Gaultier will also get the museum spotlight.

Another part of the exhibit will also explore deconstruction, the fashion term coined to describe the work of Martin Margiela and led by several Japanese designers, including Rei Kawakubo of Comme des Garçons during the 1980s. Expect to see Margiela’s famous Tabi shoes, Kawakubo’s avant-garde ensembles, and more on display.

Minimalism also became popular, with the work of Calvin Klein, Jil Sander, and other designers paving the way for the signature aesthetic with their chic but simple basic pieces. Of course, a ‘90s exhibit wouldn’t be complete without grunge, another key style that was associated with the decade’s vibrant music scene, which eventually infiltrated the fashion industry, thanks to designers Marc Jacobs and Anna Sui.

Environmentalism and waste reduction were other concepts that designers felt strongly about even in the ‘90s, and visitors will get a chance to see some of the era’s sustainability-focused practices from designers like Lamine Kouyaté, whose garments were assembled from discarded or unwanted materials. Visitors can also get a glimpse into the attitudes and styles deriving from globalization during this time, as it expanded considerably in the 1990s, especially in Europe and the United States. Some designers, such as Chinese designer Vivienne Tam, were important to this era as they were inspired by their own heritage.

In addition to the array of designer clothing and trends on display, visitors will also be able to enjoy illustrations of 10 key styles from the exhibition by artist Ruben Toledo, made especially for the museum.

When and how can I see the Reinvention and Restlessness: Fashion in the Nineties exhibit?

Starting from Jan. 19 through Apr. 17, 2022, the Reinvention and Restlessness: Fashion in the Nineties exhibit will be open at the Museum at FIT in New York City on Wednesdays, Thursdays, and Fridays from noon to 8 p.m. EST, and Saturdays and Sundays from 10 a.m. to 5 p.m. EST. The exhibition is free for admission, with a mandate that all visitors, regardless of their vaccination status, wear a face mask while in the museum. Current protocols for COVID-19 are available on fitnyc.edu.