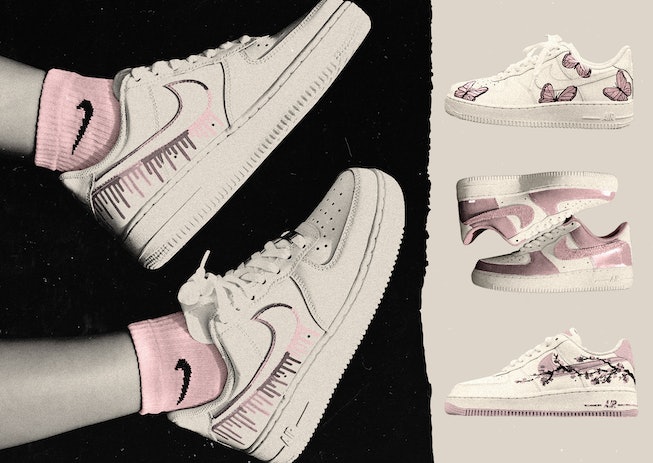 It's no secret that fashion trends are starting to stem from TikTok. "Five-Inch Inseam" TikTok showed us how good teeny shorts can look on men. "Little Shirt, Big Pants" outfit videos flooded my feed as the seasons changed in the spring. But now, thanks in part to quarantine boredom and the endless creativity of Gen Z, customized Nike Air Force 1s have become this season's favorite accessory.

The biggest and most talented stars behind this sneaker DIY movement are also some of its youngest. Uriel Quintana, a 17-year-old creator from Omaha, Nebraska, boasts over 331,000 followers on TikTok and more than 31,000 on Instagram under the username CustomsByUriel. Quintana shot to fame in a matter of months after posting his first TikTok in November 2019. Despite how detailed his drawings are, he has no formal art background. "I literally just started customizing and that's how I learned," he tells NYLON.

San Francisco-based artist Vicky Vuong — CestLaVic on Instagram — was on track to get her master's degree in materials engineering when she designed her first pair of custom shoes eight years ago. What started as a special project for a family vacation has turned into her full-time job. Vuong also created an Instagram series called #SWOOSHSUNDAYS, where she and her followers customize the Air Force 1's iconic check mark. She sees it as a way to lower the barrier of entry for new artists: "The swoosh is something that you can do without ruining the whole shoe."

The series is also a way for her to flex her creative muscle. "Swoosh Sundays is for me to say, 'I can put whatever I want on [my sneaker]. It’s once a week. It's not permanent," says Vuong.

Sites like The Custom Movement made it possible for Vuong to turn her side hustle into a proper business. Since its launch in 2019, the site has grown to be one of the most prominent retailers for customized items, starting with sneakers and now expanding to accessories and apparel created by 30,000 independent artists from around the world.

For artist Kyrah Radney, who goes by KyrahsKustoms online, The Custom Movement helped her make her first sale. "I've always been super into visual art, specifically hand-drawing," she says. Customizing her brother's Air Force 1s gave the 22-year-old the chance to explore her creativity in a new way. "Being that I just love everything art, I decided to try my hand at painting sneakers." Now, she sells on Etsy and directly from her Instagram, too.

While other brands are featured on the site, Air Force 1s continue to dominate the market, and the sneaker's long-standing connection to pop culture is the reason why (Rapper Nelly even dedicated a whole song to the shoe in 2002). Just like Adidas Stan Smiths or Converse Chucks before them, Nike's Air Force 1 has become synonymous with today's youth culture. They're instantly recognizable but can also serve as a blank canvas for artists and fashion DIYers. Plus, with a retail price that's under $100, the sneaker is accessible to almost anyone who wants to put their own artistic spin on them.

So why is the trend exploding on TikTok? "TikTok is fundamentally a remixing platform," says Akshar Bonu, The Custom Movement’s co-founder. It's a fair assessment to make: Users put their spin on everything, from dance routines and music mashups to political hot takes. It's not surprising that these young creators would want to remix the items of clothing that they love wearing IRL.

For Jordana Schrager, TikTok was the perfect outlet to grow her already booming business. Schrager started designing and selling Vans slip-ons in high school in 2010, and she was able to transition her work into a full-time job after she finished college. Her business had launched on Instagram under the username By_Jordana, but TikTok allowed her to reveal her artistic process. She posted her first video in January and it "went viral right away," she recalls. Now, Schrager boasts 56,000 followers on the platform.

Recently, Dixie D'Amelio showed off a pair of customs that Schrager had outfitted with a black cloud for the singer's "Be Happy [Remix]" music video. Schrager got in touch with the D'Amelio sisters after their mom, Heidi, commented on one of her TikToks. She has also designed a pair of Vans for Miley Cyrus, who sported Schrager's shoes while backstage at the VMAs in 2015.

When it comes to how the custom Air Force 1s trend will grow, the opportunities are seemingly endless. In addition to her sneakers, Schrager has seen an uptick in customers asking for painted Birkenstocks and Ugg slippers. Radney has just started selling tie-dyed hoodies and socks on her page, and wants to expand into more categories. Bonu sees the trend as a vision for what the fashion industry might look like in the future. "Custom sneakers are going to be the start of a much larger shift towards independent artists transforming the most desirable products and industries today," he says. "The artists that we focus on right now are those whose art interplays with pop culture." If the trend's popularity on the app and beyond is any indication, that future isn't so far off.