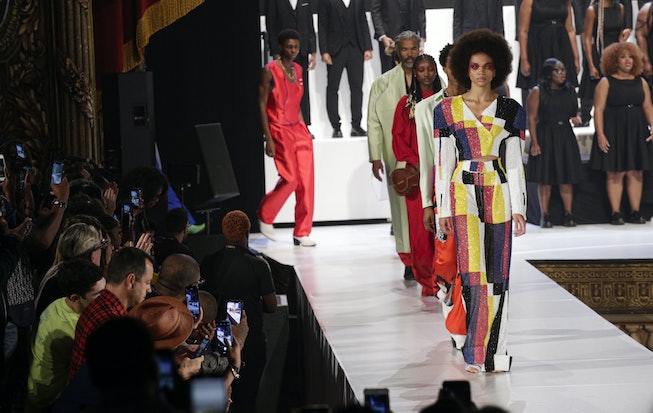 Pyer Moss' Kerby Jean-Raymond is proposing a new kind of fashion week presentation. On Monday, the designer announced that in lieu of his usual runway show, he'll have a drive-in fashion event during New York Fashion Week in September. Jean-Raymond will premiere his feature-length film American, Also, following the two years leading up to his show in 2019 at the Kings Theater in Brooklyn's Flatbush neighborhood.

The premiere of the film during fashion week will set off a series of drive-in screenings across the country. While Jean-Raymond won't be presenting a new collection of clothes during the event, he is planning to drop a selection of pieces to coincide with it.

"It's always been our mission to show the amount of thinking and laboring that goes behind putting together a collection — we've been slowing down the speed of how much we produce and improving the quality of what we produce throughout the years," Jean-Raymond told Vogue in an email. "This film aims to show the love and care our entire company puts into every single moment we create and will show that we appreciate fashion as an art form and communication tool that we’ve used to embolden a community around us."

The future of the typical fashion week isn't expected to return anytime soon, or possibly ever. The COVID-19 crisis has forced fashion weeks this summer in Milan, London, and Paris to go entirely digital for designers to present new collections. It's unclear how long this new era of for fashion will last, but it's expected to continue for several years at least, and it's possible grand spectacle in-person fashion weeks will never go back to the old norm.

Check out the trailer for American, Also, below.